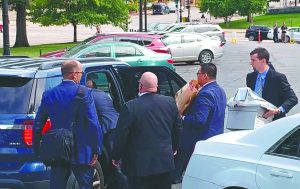 Unidentified FBI agents carried material out of the Capitol on Sept. 24 in Springfield. The agents were searching the office of Sen. Martin Sandoval, D-Chicago. (Photo by Jerry Nowicki/Capitol News Illinois)

Sandoval (D-Chicago) also resigned Friday from his post as chairman of the Senate Transportation Committee, according to a spokesman for Senate President John Cullerton. But he still retains his leadership post as Senate Democratic whip, the person responsible for ensuring party discipline on key votes.

Federal agents raided Sandoval’s Statehouse office, his district office in Cicero and his home in Chicago on Sept. 24. In response to records requests from news media, Cullerton’s office released a heavily-redacted copy of the search warrant, along with a list of items that were seized.

It indicated investigators were looking for correspondence and documents related to several individuals and businesses, but most of those names were blacked out.

Sandoval has not been charged with any wrongdoing.

The unredacted material, however, adds significant detail, and indications of where the investigation might be headed.

The warrant indicates agents were looking for evidence of crimes under Article 18 of the United States Code, which deals with “deprivation of rights under color of law,” or crimes committed by public officials. It identifies specific statutes involving conspiracy, theft and bribery, fraud, wire fraud, and a statute, 18 U.S.C. 1951, “interference with commerce by threats or violence.”

The first set of materials listed in the search warrant identifies SafeSpeed LLC, a company that provides automated red-light cameras to several communities in the Chicago area. Along with SafeSpeed, the search warrant lists several individuals, including Cook County Commissioner and McCook Mayor Jeff Tobolski; his chief of staff, Patrick Doherty; Berwyn Alderman Cesar Santoy, who was also on the Illinois Tollway Highway Authority Board until his temporary appointment was pulled Friday afternoon by Gov. J.B. Pritzker; a company named Technicraft Collision Repair; that company’s president, Sebastian Jachymiak; and a company identified as Arq Design Build.

Chicago-area news outlets have reported that Sandoval personally intervened on SafeSpeed’s behalf to get Illinois Department of Transportation approval for a red-light camera in Oakbrook Terrace that IDOT had previously denied, all while taking tens of thousands of dollars in campaign donations from the company and its owner.

That has prompted renewed calls to repeal state laws that allow municipalities to use red-light cameras to enforce traffic laws.

Pritzker withdrew Santoy’s appointment in a one-sentence letter. During an unrelated news conference Friday, the governor had urged Santoy to step down.

“I only just heard about this on my way in today, because I guess it was only released a few minutes ago,” Pritzker said. “The first thing I will say is that corruption and self-dealing are unacceptable and will be rooted out, whether it’s in my administration or in the Legislature. And so, from my perspective, Cesar Santoy should step aside from his position on the tollway board.”

Another paragraph in the warrant identifies items related to Puentes Inc., an English-Spanish translation service company that Sandoval owns, and Monarca Inc., which, according to the Illlinois secretary of state’s website, is owned by Sandoval’s wife, Marina.

The warrant goes on to identify items related to the utility company ComEd and its parent company Exelon, Chicago-area real estate developer Vahooman “Shadow” Mirkhaef, businessman Michael Vondra and several of his associates, a number of real estate companies and other businesses.

The documents released Friday also include an uredacted copy of the list of items seized from Sandoval’s office. They include a file labeled “IDOT” with letters from the mayor of McCook as well as documents from the Burke Burns law firm in Chicago. They also included invoices and correspondence with Marina Sandoval’s company, Monarca Inc., and agreements between that company and “other entities.”

Democrats were quiet about the new information released Friday, but Illinois Republican Party Chairman Tim Schneider released a statement saying it suggested a culture of criminal activity within the Democratic Party.

“From another close (House Speaker Michael) Madigan ally to Pritzker’s tollway appointee, there is virtually no level of state and local government in Cook County that is not teeming with self-dealing Democrats looking to screw over taxpayers,” he said. “The Illinois Democratic Party is a crime ring masquerading as a political party.”