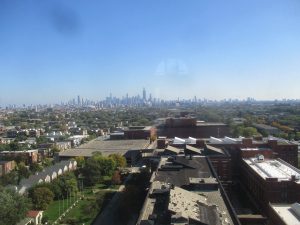 American Medical Association, Northern Trust and the Chicago hospitals and healthcare providers are teaming up with nonprofit lenders to invest in businesses and community organizations throughout the West Side (Photo by Igor Studenkov/for Chronicle Media)

As several health-care professionals and city elected officials emphasized during the Feb. 26 press conference, many residents of the West Side of Chicago have to travel outside their neighborhoods to get any kind of medical care — and that can literally make a difference between life and death.

That is why West Side United, a collaboration of health systems and hospitals, is using the funding it obtained from Chicago-based Northern Trust bank and four nonprofit lenders to invest in organizations that look to improve the quality of life for West Side residents. The idea is to not only improve access to medical care, but to address other issues that affect their quality of life, such as lack of job opportunities, quality education and safe housing.

Mayor Lori Lightfoot touted the push as something that complemented the city’s Invest South/West initiative, which looks to put more city resources into South Side and West Side communities that haven’t historically seen consistent city investment.

West Side United was established in 2017 by six hospitals and health systems, most of which are based on the West Side or have West Side presence. That includes North Lawndale-based Sinai Health System, and three institutions based in the Illinois Medical District — the Cook County Health system, Rush Medical Center and University of Illinois Hospital & Health Sciences System.

AMITA Health system has several facilities in the neighboring Humboldt Park, while Lurie Children’s Hospital of Chicago is the only one of the founding partners that’s based on the North Side. The six institutions believed that they must do more to not only improve healthcare on the West Side, but to address economic, infrastructural and educational factors that affect the residents’ quality of life.

Most recently, American Medical Association, a Magnificent Mile-based association of physicians and medical students, joined in. In a statement posted on the organization’s website, Patrice Harris, AMA’s president, wrote that the organization shares West Side United’s concerns.

“The health of a community is largely and most often defined by factors outside the walls of our hospitals and clinics, such as access to affordable housing, healthy food, safe neighborhoods, economic opportunities and high-quality schools,” she wrote. “Even something as simple as access to safe and reliable public transportation to make a doctor’s appointment can boost a patient’s health and ability to navigate the health system. As physicians and leaders in medicine, we cannot be silent on this issue when there is so much need and so much at stake.”

To address those issues, the West Side United partners agreed to contribute $7.7 million — with the AMA providing $2 million — to provide loan capital West Side small businesses and community organizations based on “the community’s needs, such as improving access to affordable housing and healthy foods, financing local business projects, or supporting job creation efforts and educational programs.” The funding will be spread over the course of the next two to five years. According to their joint press release, the focus will be on Austin, East Garfield Park, West Garfield Park, Humboldt Park, Pilsen, Near West Side, West Town, North Lawndale and Little Village. Four nonprofit lenders — IFF, the Chicago Community Loan Fund, Local Initiatives Support Corporation, and Accion Chicago — will decide which organizations will get the funding. The Northern Trust is kicking in the additional $1.5 million, and West Side United is open to more organizations contributing.

During the Feb. 26 press conference, which was held at Austin Town Hall Cultural Center, West Side United Executive Director Ayesha Jaco drew parallels between two major events that shaped Chicago — the Great Chicago Fire and the riots that erupted across the West Side in the wake of the assassination of Martin Luther King Jr. While the city was quickly rebuilt and thrived in the wake of the former, the latter wasn’t met with nearly the same response — something that, she said, affects those neighborhoods to this day.

“We are making not only black history, but history for the next generations coming to our institutions,” Jaco said. “We’re honored to be in this space, as the City of Chicago made the poverty agenda pivotal.”

“As physicians, our pursuit of health equity is guided by AMAs’ existing code of medical ethics,” he said. “We will accomplish this work through much of our outreach, strategic investments like this, as well as seduction.”

Connie Lindsey, Head of Corporate Social Responsibility, reflected that one’s health shouldn’t be affected by where one lives — and that contributing to initiative is a major part of their effort to “create positive, sustainable change in historically under-served communities.”

Ald. Chris Taliaferro, whose 29th Ward includes most of the southern and western portions of the Austin neighborhood, evoked King’s “I Have Been to the Mountaintop” speech, saying that, 52 years after the civil rights leader shared the message of hope that the equality would eventually be achieved, the “Promised Land” still hasn’t been reached.

“[It is] the lack of investment that makes the Promised Land difficult for each and every one of us,” he said. “And I’m glad to be standing with the mayor who is willing to make investments where they’re needed.”

Lightfoot argued that investing in the West Side is vital not just for the people who already live there, but for the communities’ future. While parts of the city have been gaining population, the majority-black neighborhoods have tended to lose it, which, the mayor said, hurts the community.

“We will not only give hope to our neighborhoods, but we will stanch the exodus and [put the neighborhoods] in the position of growth,” Lightfoot said. “We have to fulfill the vision that deals everyone in.”

Darnell Shields is the executive director of Austin Coming Together, a coalition of neighborhood nonprofits that has been coordinating and pooling together resources for larger-scale community development. He said that he knew first-hand how much of a difference that kind of investment meant.

“As a new nonprofit, gaining access to capital would be very difficult,” Shields said. “[The funding has significantly increased our capacity as an organization, increased our capacity to meet needs of the folks that we’re committed to serving. And so, I very much want to thank AMA and West Side United, and IFF for having a vision to come alongside of the organizations that are small and have a mighty mission to change the state of the problems that we face on the West Side.”