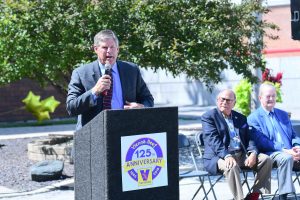 Tom McGlade, vice president of marketing/e-commerce for Vienna Beef, talks to the crowd assembled for the company’s 125th anniversary celebration on Aug. 1. (Photo courtesy of CreativeMarketingAssociates)

He remembers as a boy having Vienna Beef hot dogs, tamales and other cheap eats at the neighborhood stand.

The Oak Park resident was one of hundreds of people on hand Aug. 1 as Vienna Beef marked its 125th year as a Chicago institution with a free lunch, hot dog lecturers, and tours of the Vienna Beef History Museum.

“I came for the museum,” Jung said, “and stayed for the celebration.”

Jung said it wasn’t only Ray’s that fulfilled his hot dog hankerings growing up. He remembers people in his neighborhood selling hot dogs from in front of their homes.

“I don’t know how they got away with it,” the 67-year-old former Portage Park resident said after having a couple of Chicago Dogs (no catsup, of course) at the Vienna celebration.

Jung said he still has at least a hot dog a month, but is more likely these days to get his Vienna Franks from Jewel instead of a hot dog stand or cart.

“Old habits die hard,” he laughed regarding his lifelong love of hot dogs. 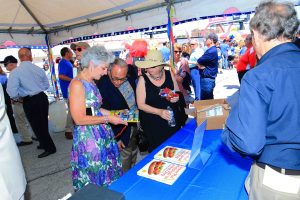 The hot dog business is alive and well, according to Mark Reitman, who has helped more than 1,300 people start their own hot dog stands and cart businesses.

Reitman remembers selling his first hot dog in 1955 at his dad’s establishment on the West Side of Chicago.

“Vienna Beef saved my life,” Reitman said of the program where he teaches stand and cart owners the ins and out of the business.

“I show them how to go through the application process, how to get started, how to operate a cart or truck, how to do catering,” the Hot Dog U professor said.

Tom McGlade, who has been with Vienna for 32 years, said the Hot Dog University 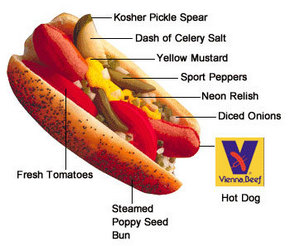 program is a way for individuals to learn about the Vienna company and how to succeed in the food industry.

“They hear from the experts. They learn early the way to do things,” McGlade said. “We work with them. At the end of the day, everything is taught to them in the same way.”

McGlade, Vienna’s vice president of marketing/e-commerce, said it was “absolutely amazing” that the company has been part of Chicago for 125 years.

Food historian Bruce Kraig got into hot dog research by accident but quickly became fascinated with the iconic food with ties to Chicago. He gave lectures on hot dogs at Oxford University in 1985 and 1987. He began researching the hot dog industry’s history and allure. He has written two books on hot dogs’ long-standing attraction with Chicago residents.

“Eighty percent of America’s meat in 1900 came from the Stockyards in Chicago. It is not surprising a cheap meat like hot dogs emerged as a staple,” Kraig said.

Kraig said even though hot dog carts can be found on the streets of New York and Los Angeles, those cities don’t measure up to Chicago in terms of hot dogs. 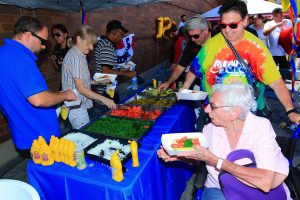 People load up their hot dogs with condiments. (Photo courtesy of CreativeMarketingAssociates)

Kraig, a professor emeritus at Roosevelt University, said you can go back to Chicago literature of the 1880s and ’90s and find hot dog references.

He said the ethnic roots of Chicago played a role in hot dogs emerging as a staple here.

Fellow food historian Bill Savage, an English professor at Northwestern University, said America, like today, was not as welcoming of immigrants in the 1880s and ’90s.

“Immigrants are brave, determined individuals without fear up against sizable odds,” Savage said. “They bring a lot with them and one of the things they bring is food.”