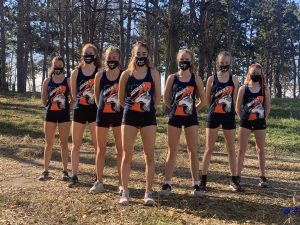 Led by the fastest runner in school history, a club consisting of members of the Oak Park and River Forest Huskies girls cross-country team finished fourth in the unofficial state championship on Nov. 8.

It represents the best showing in the program’s 40-year history. So was the extraordinary effort of junior Josephine Welin, who won ShaZam Racing’s 2020 Division 3 XC Championship at Three Sisters Park in Chillicothe, outside Peoria.

Welin finished in 17 minutes, 25 seconds, a new course record that was 35 seconds ahead of Katrina Schlenker of Batavia.

Under sunny skies and unusually warm weather well into the 60s, the rugged and varied topography of Three Sisters Park was a challenge for runners, particularly a wooded stretch in the middle of the competition.

“I kept on telling myself, ‘Think about how hard you’ve been working all summer and all season,’” Welin said. “‘I’m strong, I can do this.’”

Due to the nature of the event — it was not an official Illinois High School Association race — OPRF coach Ashley Raymond, like all the other coaches on hand, observed the race as a supporter.

“Josephine used her trail-running experience from (the pandemic) quarantine to give her confidence going through the hills and tough terrain,” Raymond said.

Even without Welin, the squad would be the finest in school history. Instead of a fourth-place finish, the Huskies would have finished fifth, easily eclipsing OPRF’s previous best statewide placement of 10th place.

“The team goal was to finish in the top five,” said Raymond. “The girls knew what teams they needed to beat head-to-head, and they executed during each flight.”

Their runs were spread over three heats, or flights, which preceded the final one in which Welin competed.

Outside of Welin, sophomore Avery Minnis was the steadiest Huskie all season long. Her performance Sunday served as a microcosm: Minnis placed 29th overall, gradually passing rivals and turning in one of the fastest kicks to the finish line. Her final time of 19:07 was eighth of the 37 runners in her heat.

“Avery had a standout performance,” said Raymond. “She was flying at the finish and passed a pack of three girls in the final straightaway.”

Seniors Nora Wollen and Parker Hulen both continued their comebacks from injury, placing fifth and sixth in the day’s second heat, with times of 19:39 and 19:47. Those were good for 51st and 57th, respectively, overall. The four heats, collectively, consisted of 157 runners.

Hulen, in particular, dug deep for a strong backstretch push that moved her up six crucial spots in the final tally.

The fifth Huskie is one key reason why the team’s future outlook is so bright: freshman Lenny Sterritt posted a 20:07 time, 78th overall and 12th among first-year high schoolers.

Rounding out the Huskies were junior Samantha Duwe (20:11, 84th place) and senior Maggie Rose Baron (20:18, 94th place), both competing for the second time on a state championship-level stage.

The Huskie alternate, part of a burgeoning crop of strong, younger athletes, was freshman Katie Stabb.

The competition was a quintessentially 2020 affair: everyone wore masks, except runners during the four heats that helped pare down the packs as a precaution against the coronavirus. Instead of being an IHSA event, the championship was, technically, a meet-up of clubs formed by runners from the top 20 schools in the state, along with other top individual competitors. Instead of being a “Class 3A” event, it was labeled “Division 3” by organizers.

In the end, however, it served as a de facto state-title showdown, pitting those athletes against one another.

Invitations were extended by ShaZam Racing, an event and race management company, after IHSA sectionals the previous weekend; the Huskies placed second at their sectional, out of 15 teams, for the top sectional showing in school history. Along with ShaZam, MileSplit Illinois organized the championship.

The championship club, with 58 points, was “Kroy,” the York High School team that reversed the Elmhurst school’s spelling in a nod to the upside-down world of 2020. “North Naperville,” a simple semantic reversal of the Naperville North High School program that had won four straight state titles, was second with 71 points.

Yorkville XC (the Yorkville High squad) took third, with 159 points, while the Huskies (“OPRF” was not in the club name) had 172. The Batavia team, dubbed “Distance Dawgz,” placed fifth with 194 points.

For a recap of individual results, visit:

Matt Baron is the father of a Huskie runner.