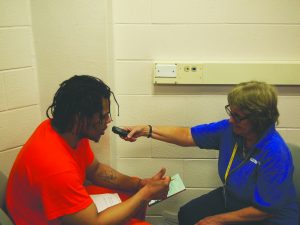 Bennie Ross, incarcerated in the Kane County Jail, gives Aunt Mary’s Storybook volunteer Dee Reitz a thumb’s up after getting the introduction the way he wanted for his recording of a book about President Barack Obama for one of his daughters. (Photo by Kevin Beese/Chronicle Media)

He talked about the Chicago resident going by the nickname “Barry” growing up, being a Harvard Law School graduate and being the first African-American president of the United States.

It was not a book-signing or political lecture, but a session of the Aunt Mary’s Storybook program where incarcerated individuals record books for their children.

Ross sat in a room in the C pod of the Kane County Jail, reading from the book about Obama for his 8-year-old daughter, who is a big fan of the 44th president, according to Ross.

“I am reading from a book called “Who is Barack Obama?” for my daughter Shaniyah … I love you so much, baby,” Ross said into the recorder held by volunteer Dee Reitz during his introduction to the book.

Sitting in a chair in his orange jail jumpsuit, Ross would also tell his oldest daughter that he expected her to send him facts about Obama.

He later read a book called “Animals” for his 19-month-old daughter, Za’hira, telling her to touch the animals in the book, which had pieces of different fabric attached to them.

The recording of Ross’ voice, the two storybooks and a personalized note from him will be sent to his daughters.

“I feel the program is a way for our children to have a connection to us,” Ross said. “… This program is fantastic.”

The Storybook Project falls under the umbrella of the Companions Journeying Together program. Companions staff and trained volunteers bring into various jails and prisons a selection of books along with audio recorders. They assist participating parents and grandparents in choosing an age-appropriate books for each one of their children or grandchildren. 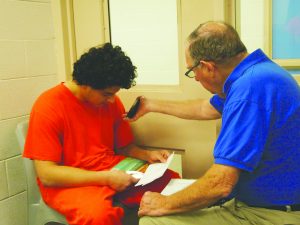 The Aunt Mary’s Storybook Project was started by Companions in 1993 as a Christmas project for the children of women incarcerated at Cook County Jail in Chicago. It has since become a year-round program and has served as a model for similar programs in more than 20 states.

The Storybook Project works with: 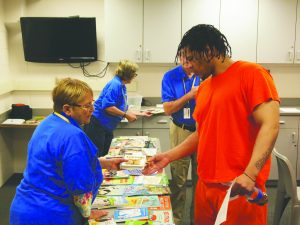 “When an adult is in prison (or jail), it really affects the children,” said Jana Minor, who founded Companions Journeying Together with her two sisters in 1986. “No one ever thinks about the children.”

Minor started Companions with her sisters, Mary Rammien and Margaret Rudnik, using money they inherited from their aunt, Mary Best, a school teacher. When they started the Storybook Project, they knew they had to name the effort after their aunt who provided the funding.

The mission of Companions is to reach out to incarcerated women and men in Illinois through programs designed to build healthy relationships and foster positive communication between prisoners and their families.

Minor said she never thought when she started correspondence with an inmate in Alabama in 1979 that her life’s mission would be kindled and that she would be helping incarcerated individuals for more than 43 years.

“I’m in pretty dangerous situations,” Minor said of her work in prisons and jails. “As a kid growing up in a town of 700 people near Peoria, I never imagined what I would be doing.”

She said being in prisons and jail for more than four decades has changed her perspective of the judicial system 180 degrees.

“Not every prisoner is a bad guy and not every person working in a prison is a good guy,” Minor said. 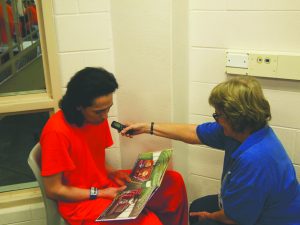 Jose Gonzalez reads the book “My Name Is Not Isabella,” a story about a girl who decides to change her name to get out of chores, for his daughter named Isabella. (Photo by Kevin Beese/Chronicle Media)

She remembered one Storybook Project session when a big guy with muscles froze up when he started to record a book for his child.

“‘I’m nervous,’” she recalled him saying. “I said, ‘You’ve been in tougher situations than this.’”

John Egelston, another individual incarcerated in the Kane County Jail, picked out a book about a red truck to read to his sons, 2 and 1½, remembering that he had a red truck that he played with as a child.

He was thankful for the Aunt Mary’s program being at the jail.

“At their age, it is tough for them to sit for visitation,” the Schaumburg resident said. “This is some way to be involved in their lives.”

Jose Gonzalez of Aurora saw the book “My Name is Not Isabella,” a story about how a girl keeps changing her name when she doesn’t want to do things at home, and grabbed it immediately.

“That is my daughter’s name, Isabella,” Gonzalez smiled.

He said he also welcomed the Storybook Project being at the jail.

“It gives us a chance to connect with our kids a little bit,” Gonzalez said.

Marcello Villagomez read a book to his son, Julian, 3.

“It was nice. I liked the chance to do this,” Villagomez said. “It lets us give attention to our kids.”

Quinton Robinson Sr. said the program is a great opportunity for the incarcerated men to be involved in their children’s lives.

“I appreciate them coming here and doing this,” Robinson said after reading a book for his son, Quinton Jr.

The Chicago resident, who is also part of Companions parenting class at the Kane County Jail, said the programs the organization runs at the jail help the incarcerated get a better handle on life.

“They wake us up,” Robinson said of the Companions programs. “We are all not bad people. We made bad decisions. (The Companions leaders) do proactive things. They work magic.”

“We are a shoestring operation,” McWilliams said. “We do a lot of work with very few resources. Most of our money comes from a couple of grants and private donations.” 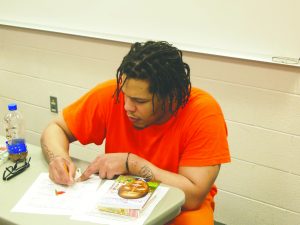 Bennie Ross writes a personal note to his children after finishing the recording of books that will be sent to his children by the Aunt Mary’s Storybook program. (Photo by Kevin Beese/Chronicle Media)

McWilliams said the Storybook Project brings as many as 400 books into a prison or jail and divides them into age-appropriate categories.

“A lot of them really care about their kids,” McWilliams said about incarcerated men. “There is the deadbeat dad perception, but that is only a small segment of the incarcerated population.”

McWilliams said the voluntary program has never had any issues and, in fact, there is a lot of self-policing done by the incarcerated individuals.

The Companions executive director said the free Storybook Project is used by many jails and prisons as a behavioral incentive.

“They have to be ticket-free to participate,” McWilliams said. “They have to have no disciplinary tickets for one to three months for the prisoner to be offered the program. They use the program as an incentive.”

McWilliams said jail and prison officials do listen to the recordings before they are sent out to ensure the incarcerated individual is not slipping in any information they should not be.

He said the Storybook Project is a way for incarcerated individuals to connect with their children.

“In prison, there is no option to send anything but a greeting card. They can’t buy their children a toy or a book from Amazon,” McWilliams said. “The project gives them hope. Even if they have a messed-up relationship with their kids, the program is a good start at mending bridges.”