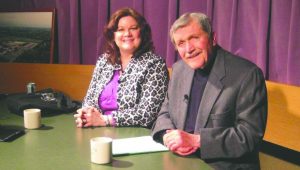 Jack Coombe, one of the last American survivors of the 1941 attack on Pearl Harbor, and one of Northbrook’s first citizens, died Oct. 9. Coombe was 97.

Coombe had a long history in entertainment, ranging from vaudeville and old-time radio to a 20-year stint co-hosting a Northbrook cable TV interview show that began when he was 72.  He also wrote nine books, mostly about military history.

“He was amazingly sharp, and I think most of the time, he was in his 80s,” said Michael Gorman, who did the bulk of the camera and technical work for the TV show. “He would always have good questions, and be ready with a funny anecdote.

“We used to do the shows at the end of the day, and I would get tired just watching him,” the much younger Gorman said.

“He was a wonderful, caring man, and he was always with his wife, Peggy,” he said.

Margaret Coombe died last year after 70 years of marriage. The two were rarely seen without each other, during the decades they lived in Northbrook.

Born in Baltic, Minnesota, to a comedian father and a dancer mother, Coombe first appeared on stage at the age of 6. He also performed on radio and television, and had a part in at least one movie. He was a radio comedy writer, and taught creative writing in grammar schools and high schools.

Coombe had been a U.S. Navy seaman when the bombs started falling Dec. 7. Between ships, he was eating breakfast in the mess hall when he heard the “whump” of a bomb hitting, and assumed that a U.S. pilot had accidentally dropped a piece of ordinance on the beach, he said in 2016.

Leaving the mess, he looked up to see a lone plane circling slowly, and wondered why a pilot was violating the ban on flying over the air base.

It wasn’t until the planes overhead started to multiply, and he could see the red meatballs on the wings, that he realized he was in the middle of the start of America’s war in the Pacific, he said in 1996. He was ordered to try to get airmen to their planes, and raced back and forth between the bunkhouse and the airfield in his “little Chevy truck,” darting around explosions, mostly in vain.

Coombe would eventually serve about four years aboard ship in the South Pacific, as a radar operator and gunner, including participation in the Battle of Midway, where he sustained a shrapnel injury.

Though he had worked on the radio as a teen in Virginia, Minnesota, his on-air career may have really started while in the service, as he broadcast a comedy radio show called “Hello from Hawaii,” intended to take the minds of service personnel and locals off the fighting.

At the end of the war, after he was assigned to light duty in Rhode Island, his old “Hello from Hawaii” boss and an FBI agent escorted him without explanation to New York City. There, he met Danny Kaye, who hired him as a writer for his radio show. Still working for the government, his new job paid $1 a week.

His radio career continued upon discharge, and he became acquainted with Clark Gable, Gary Cooper and Marilyn Monroe, who once favored him with a kiss, he remembered.

In 1991, he published his first book, “Derailing the Tokyo Express: The Naval Battles for the Solomon Islands that Sealed Japan’s Fate,” and five years later, his second, “Thunder along the Mississippi,” that dealt with the U.S. Civil War’s river battles. That book was a revelation for Coombe: in the first month, it outsold the totals for the Solomon Islands book.

He had tapped into the continuing interest in the Civil War with a book about a little-covered segment of the conflict. “Thunder” was much-discussed in Civil War chat rooms, so he took the hint, he said, and wrote two more Civil War naval books.

Other books would follow, including “When Radio Was King: Looking Back at Radio’s Golden Age,” a 146-page 2007 tome filled with stories of his life and others, from the days when radio programming dominated broadcast entertainment.

In 2010, Coombe published “The Fighting Marshal,” a novel about a late 19th-century lawman who kept the peace with his fists, while stalwartly supported by his wife, Margaret. On the cover was a photo of Coombe in western garb and badge.

“Talk Around Town with Jack and Susan,” the village cable TV show that ran from 1994 to 2014, was the brainchild of Cheryl Fayne-Depersio, the village of Northbrook’s communications manager.

“I figured he probably interviewed over 250 people,” she said. “He would spend quite a bit of time preparing for each of them. And he did (Northbrook Cable TV’s) video newsletter for 23 years.

“I will miss him,” she said. “His enthusiasm, and his love of the community. Only a kind word would ever come out of his mouth.”

His partner felt similarly. “We were able to do our show, and the newsletter for 23, 24 years, and during all that time we never had a disagreement,” said Susan Carrington, a Northbrook software engineer.