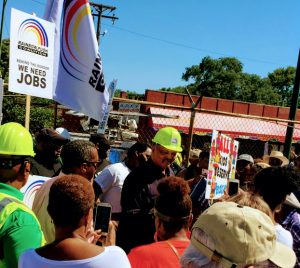 Jesse Jackson Sr., attracted a lot of attention on the way to the July 7 Dan Ryan protest. (Irv Leavitt Photo)

“You reach your destination, but alas and alack!/

You need some compensation to get back in the black/

You take your morning paper from the top of the stack/

And read the situation from the front to the back/

So put it right back in the rack, Jack!”

This snatch from a catchy old Louis Jordan song was written to reflect the mood of some returning World War II vets who found that jobs they were qualified for were few.

“Choo Choo Ch’Boogie” may also be a good vehicle to try to explain why thousands of people might want to stop traffic on the Dan Ryan Expressway, or do any number of similarly strange and off-putting things in the future.

The man with a knack will get by. It’s the rest that they’re worried about.

It all seems so hard to understand. The folks on the highway, or cheering them on from elsewhere, seem to be speaking a different language from the rest of Chicago.

“The first thing we need is jobs, for those who are less fortunate,” said Brenadan Hope, one of the participants in the July 7 Dan Ryan protest. “It’s causing a lot of the problems in the community.”

What is he talking about? Isn’t unemployment lower than it’s been in years?

Of course it is. But not for everybody.

Black unemployment has indeed been dropping for years. It’s at 6.8 percent, the lowest since 1972. But it’s still almost twice the white rate — and about 43 percent of black males 20 to 24 in Chicago are jobless. 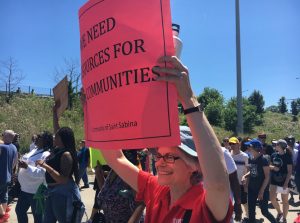 There just aren’t enough decent jobs that these often knack-free guys can get. Businesses sometimes don’t want to hire them, and those that do may be far away. The travel time and transportation cost drives down their wages’ real earning power.

How much power do they need?

Quite a bit, if they want to live indoors.

Statistics released July 4 indicate that the average cost of renting an apartment in the United States is now higher than at any time in history.

In Chicago, the average monthly rent of a two-bedroom apartment is now $2,381.

Chicago-area rents have been rising steadily for decades, but especially in the current decade. Many millennials, afraid of defaulting on mortgages because of a shaky economy and uncertain employment, have opted to rent instead of buy, said Gail Schechter, an expert on open and affordable housing who joined the Dan Ryan marchers.

“The pressure from young folks coming into the rental market is jacking up the rents for everything,” she said.

In 2016, I was looking for a two-bedroom apartment in Chicago, for well under today’s average rent. I was consistently rejected by landlords, despite having steady employment. I was then in my 27th year working for the Pioneer Press newspaper chain.

“You don’t make enough money to afford an apartment,” one landlord told me. “You need to get a better job.”

I have a knack, and I’m white. And I was making almost $20 per hour. Not enough.

I was then writing about suburban communities that refused to comply with a Cook County ordinance requiring local companies pay employees $10 per hour.

You’d be hard-pressed to even swing rent with multiple roommates for anything less than $10. Figured on a 40 hour week, and employing the standard 30 percent of income going to housing, $10 an hour provides $514 for monthly rent.

That’s not going to get you a palace. It will get you a porta-a-potty, but you still need a place to put one of those.

On the Dan Ryan, Rainbow/Push founder Jesse Jackson Sr. was asked how to bring jobs to the South Side. He suggested tax-free zones, and some people reacted as if he had said he favored a good-will mission from Mars.

But here on Earth, Chicago and Cook County grant various generous tax breaks to corporations, which proceed to erect office buildings, housing and other neat stuff almost entirely for the benefit of people with the aforementioned knacks. Or people who are doing so well, they’re beyond knacks.

The texts of most of the laws that make such tax breaks possible say that their key purpose is to elevate depressed neighborhoods and create local jobs. But the breaks have not transformed the miles of brownfield and ruin on the South Side into new factories or affordable housing. 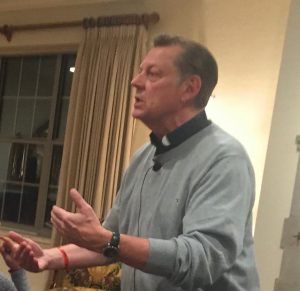 The Rev. Michael Pfleger of St. Sabina Church (in 2016) has called for attention to the needs of residents of Chicago’s South Side. (Irv Leavitt Photo)

One has to assume there is some incentive level at which such transformation would be feasible. Yet it seems that unless somebody like David Copperfield or Penn & Teller get involved, we’ll never see it.

One of the issues championed by the Rev. Michael Pfleger, who called for the stop-the-Ryan protest, is the impact caused by the rarity of mental health facilities. Untreated mental disorders among Chicagoans lacking good health insurance has led to so much crime and mayhem that the Cook County Jail has been called the world’s largest mental institution.

Mental health beds are at a premium all over Illinois, one of many states that rely on psychopharmacology much more than institutional care. It’s not because mental hospitals have drawbacks, which, of course, they do. It’s because they’re expensive.

Also, some people don’t think they add much to their neighborhoods.

I remember the first time I wrote about turning institutionalized mental patients loose with the hope that they would take their meds and just be cool without regular care. Psychiatrists were then complaining about a draft state budget that would cut 17 percent of the funding of the Illinois State Psychiatric Institute, shortly after it had sustained a 12 percent cut.

I was a kid trying to cover the issue on summer vacation. It was 1977. This is an old problem.

Forty years later, I was writing about communities refusing to accept small for-profit mental health facilities near their houses. They were mainly worried that they’d lose property value.

It struck me that if I wanted to protect my property value, I would welcome a local mental health facility that could provide institutional treatment when my neighbors needed it. It’s not like I don’t know anyone whose cheese occasionally slips off his cracker.

At least they’d have a place to stay. There are plenty of folks, in Chicago, my home town, who have to scramble for that. It’s a bit like the song tells of the jobless, discharged soldier who asked the cab driver to just turn around and take him back to the train that brought him.

“Gonna settle down by the railroad track/

Live the life of Riley in the beaten-down shack/

I just love the rhythm of the clickety-clack/

Take me right back to the track, Jack”

—-   Leavitt: Dancing on the Dan Ryan to a boogie-woogie beat —-