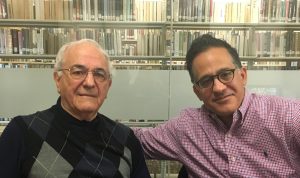 An old man living in Glenview, Ill., clarified, at least for me, much of the recent American immigration debate with a single word.

The man who spoke it is Sam Stamatis, 85, who emigrated from Greece as a 13-year-old at the end of World War II. I know of him through his son, Peter, 50, a nice guy who lives in that same suburban town. Several years ago, the two of them wrote a book, “Dandelions for Dinner,” about Sam’s youth in a small town in Greece.

It has interesting insights into childhood and family dynamics. But it’s mainly about war and starvation.

It’s also about the desire to escape bad stuff like that and get to America.

Sam Stamatis’ father Panagiotis had spent a few years in Chicago before he hit hard times after the stock market crash of 1929. He returned to Greece and much worse poverty. He had become an American citizen, which gave him and the kids, Saranti (Sam) and Stathi, an automatic ticket to the U.S. after the war finally ended, but not their mother, Nitsa. After months of dickering with various bureaucrats, they were able to put together documentation to get everybody out.

But many weren’t so lucky, or clever. It’s still hard today, for people like the Hondurans heading through Mexico toward the United States in what are being called caravans, seeking asylum here.

Foreigners like them, arriving in the United States without papers, may be granted asylum if they legitimately fear for their safety if sent back.

There is another reason many helpless people from around the world sneak, beg or connive to enter this country.

They have a dream of something better.

Everybody knows that. But the interesting part is that the dream is not exclusive of the fear.

That was underlined for me with that one word from Sam Stamatis, when I asked him the reason his family had left Greece for America.

How could that be?

Yes, seeking to escape starvation is economic, sure. But beyond poverty, they had plenty to fear by the time the war was over.

The Andartes — the local communists — had already killed thousands of people in their bid to assume control of the country, and the mayhem stepped up with the power vacuum left by the Nazis’ exit. The Stamatis family had come very close to being statistics.

The impulse to leave became compelling for the little family as the peril increased. But even to this day, Sam Stamatis thinks not so much of the fear of bullets, but of the memories of hunger and the lack of opportunity.

“My father was determined to come to the U.S. We were in a distressed area where the next meal is questionable,” he said.

“What kept this family going was the hope that maybe after the war, they were going to come here,” Peter Stamatis, 50, also of Glenview, said.

The point is that even though the primary aim of an asylum seeker is economic, that doesn’t mean that his or her safety isn’t a compelling reason to honor it.

When I had called Peter Stamatis to ask him and his father to tell me what they thought of the caravan of Hondurans making its way toward the United States border, he said, “Dad’s not  going to like it.

Dad may have turned a page.

“Those people have a force behind them that propels them,” Sam Stamatis, a retired engineer, said. “They have no fallback position.

“What do they do, stay there and suffer the consequences?

“Don’t forget this is a great country. They may not want you, but when you do arrive, the doors are always open.”

“We’ve got to help our fellow man,” he said. “At the same time, this is a country of laws, and there’s got to be some order to it.”

But there’s no progress toward a solution, he said. “Each side thinks it has the moral high ground, and is 100 percent right,” he said. “To me, it’s just a road to nowhere, other than more fighting with one another.”

To him, it’s reminiscent of the conflicts his father remembered that grew between Greeks trying to survive under occupation.

At one point, the British were backing Greek communist anti-German guerillas, and the Germans were dressing up Greeks in Greek Army uniforms to try to keep the communists in check. The main attraction of the German-backed force was that the soldiers would be provided with one meal per day, the elder Stamatis said.

“There were so many dying,” he explained. “There were funerals almost every day for people who were dying of starvation.”

The Greece of 1944 bears some similarities to Honduras of 2018. Honduran poverty is intense, and life is cheap. The homicide rate is over 10 times what it is in the United States.

In late-war Greece, people who were even suspected of being on the wrong side were dragged out of their homes and shot, or slaughtered on the street.

Sam Stamatis said they were often saved by his mother’s bravery and his father’s comparative meekness.

His mother was once able to talk a young killer out of shooting her husband on the street. His father may have kept his family safer by intentionally never issuing an audible opinion on one side or another.

Many people died for causes that they may have been unclear about. But not if you asked them, Peter Stamatis said. “Two sides, each had the moral high ground, and they’re killing each other,” he said.

The British switched sides, and before long, were joined by the Americans in backing what became the official Greek government army. Yugoslavia, Albania and Bulgaria backed the communists, as Greece was torn by a civil war that continued until 1949.

The intense arguments of generations ago in the Plateia of the Stamatis’ hometown of Gargaliani reminds Peter Stamatis of what’s happening in the United States now.

“Trump’s language is offensive, but Trump has found a pretty good dancing partner — the other side is extreme as well,” he said.

“Reasonable minds, thoughtful people on both sides, should be able to figure something out.”

“How do we decide who to let in and who not to let in? We all have different views,” he added.

“That’s why we have a Senate and a House. We put those people there to figure it out.”