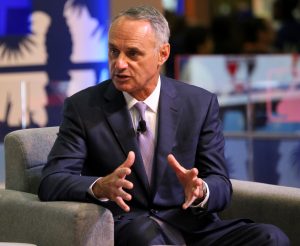 When I ponder the prospect of legal sports betting, I fondly remember the night I separated Joey Doubles and Evil Emil from most of their walking-around money, as we bet on the outcome of teenagers’ boxing matches in St. Andrews Gym, surrounded by children and their parents.

That wasn’t exactly legal. But the General Assembly will probably render sports betting legit and taxable in time for next year’s kid fights, the Chicago Golden Gloves finals in April.

Maybe sooner. It could depend on how much of Illinois’ doorjambs have been gnawed away by assorted wolves by then.

State Rep. Lou Lang (D-16) has said he will have a bill legalizing  sports betting ready for committee in January. It will take advantage of the U.S. Supreme Court’s ruling last spring that the legality of sports betting should not necessarily be up to the feds anymore. The states should have a chance.

There’s no threat Lang’s bill won’t be passed, since Illinois has gotten to the point where nobody’s about to get too prissy about where the next pension payment is coming from. And Gov.-elect J.B. Pritzker will sign it, even if it includes a rider calling for the execution of puppies.

Before the Supreme Court decision, only one state, Nevada, had legal sports betting. There are eight as of Nov. 27. Illinois is probably taking a little longer because of the state’s especially long history with illegal gambling, and all the players need time to run around Springfield making friends.

On that same late November day, Major League Baseball, in an effort to drive attendance, announced that it had named MGM Resorts its gambling industry partner.

That is a very weird sentence to write.

Here’s a weirder one. Baseball Commissioner Rob Manfred was quoted as saying it would make sense to back off attempts to speed up baseball games, because the slow pace of the game is an advantage when it comes to making bets between plays.

You may have no idea what it means to make a bet between plays if you are unfamiliar with the Wonderful World of Degenerate Gambling.

I can explain with a case in point, starring the same two individuals related to in the first sentence of this writing exercise.

Years ago, on a day when the racetracks were closed, Joey Doubles, Evil Emil and I decided to while away a summer afternoon at Comiskey Park.

I liked baseball, so I was having a good time watching the activity on the field. But Joey was intensely bored by the middle of the second half of the first inning.

“Rats,” he said, though none were in sight. “I wish that I had remembered to get a bet down on this thing.

“Who are they playing, anyway?” He peered at the field with his weak eyes. “Somebody that begins with a ‘C,’” he said. “Must be one of those Ohio teams.”

He lit a cigarette off another cigarette and gave Evil Emil a little elbow poke. “I bet you 2 dollars that the first pitch that guy throws is a strike,” he said.

Evil Emil was also bored. He disliked the White Sox and he didn’t drink beer and there were no women with us, so he said he would take the bet.

“OK, here is your deuce,” Joey Doubles said. “I will bet the next pitch is a strike, again.”

Evil Emil looked at Joey. “I think you may have a loose screw,” he said. “You should not talk with me for a while.”

Joey complied, as Evil Emil was tall and broad and healthy in everything except mind, which may have had something to do with why people referred to him as Evil Emil.

Joey Doubles turned to me with money in his fist. “How about you?” he asked.

“I will certainly take that bet,” I said, and removed two bills from his hand. “Fortune has already smiled on me, as the count is now 2-0.”

Joey sniffed, stubbed out his cigarette and started over. I soon realized that he was purposely betting randomly.

For instance, on a no-ball, two-strike count, he should consider that the pitcher might waste one in the dirt in the hope that the hitter might swing at it. He should also think about whether that particular hitter would be fooled.

But Joey bet about the same way no matter what.

He was perturbed when I would stop to think for a moment. “Are you betting or not?”

After a couple of hitters, he stopped to explain his philosophy. Baseball is boring, but betting is exciting. And if neither of us takes the time to think, by the end, whoever is behind will not have lost too much. It’ll be like coin flips. It’ll even out.

“So how is that interesting?” I asked him. “I think it’s no fun unless I’m testing my knowledge, and if winning or losing means something.”

Joey couldn’t answer. But I suspect that he saved his big, thoughtful betting for the horses. Beyond that, whatever he did, all day long, he was always thinking about making it better by adding a little gambling.

Joey, I think, took a similar philosophy with him to the Golden Gloves the night we all went there, and suggested we bet the matches.

I said $20 apiece sounded good, and he went along with that

agreeably until I won the first three bouts.

“How are you doing that?” he whined.

“I think he knows something about these kids,” Evil Emil interjected quietly. “I am no longer betting with him.” He gave me an ominous look.

“I have never seen these boys, and I have no knowledge of their background, experience or upbringing,” I said. “I can tell just by looking at them.”

Joey was doubtful. “They got headgear on. You can’t see their faces. What do you look at, their legs?”

He shook his head. “You can’t look at them anymore,” he said. “You gotta pick right away, when they say their names.” Back to the coin-flip.

“Tell you what,” I said. “I’ll be glad to pick as soon as they get to their corners.”

That was all I needed, really.

I knew nothing about boxing. I was just employing a little bit of knowledge I had picked up from an old Budd Schulberg novel, “The Harder They Fall.”

It was about a boxer patterned after Primo Carnera, billed in the 1930s as The World’s Tallest Fighter. Carnera was 6-foot-6, the same height as Evil Emil.

The idea was that Schulberg’s big fighter only won because his opponents were paid to fall down. Then, he got the tar beaten out of him — in the movie version — by Max Baer. Not coincidentally, Baer was the same guy who beat up Carnera in 1934.

The tip I read in the book was that good fighters never rested their arms on the ropes, because it made their arms feel heavier, and it was harder to punch.

Poorly trained kids in St. Andrews Gym usually betrayed their inexperience by immediately going to their corners and waiting with their arms on the ropes.

I never did tell Joey what the trick was.

Eventually, he said he wanted to stop betting on the bouts. He said we were disrespecting the families sitting around us.

“Suit yourself,” I said, tucking away my roll. “But I do not think a little wagering is likely to offend people who buy tickets to watch their kids get smacked around by other kids.”

In the future, parents will not be able to tell so readily if their fellow spectators are betting on their kids, because all the gambling addicts will not have to talk to their friends to get a little action. They will likely have their heads down, quietly wagering on their smartphones.

They may even be able to get odds on whether little Jimmie will get the better of little Tom.

Commissioner Manfred apparently expects “prop bets” like balls and strikes, hits and stolen bases, and other esoterica to be available during our famously slow baseball games. At “faster” games, there will be first downs, passes vs. runs, free-throw efficiency, three-pointers, and on and on.

It’s these kinds of bets that will be fun for gamblers, fans and athletes, too.

“Hey, Rodg? It’s me. Yeah, we’re playing Purdue tonight. Do me a favor. If we’re ahead by 12 or more with under two minutes, and I go to the line, bet 3K that I miss them both.

“Yeah, you’re right, eight ahead is enough. You the man.”