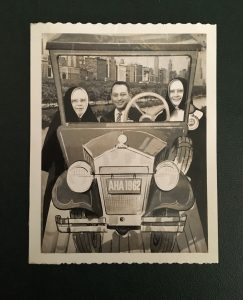 I thought my friend Mike would be pleased to buy an ice machine from me. I was mistaken.

Mike owned the Stars Inn nightclub, where he served many drinks that had ice in them. But he didn’t have a machine that made it.

He started every night with gift ice from a nearby bar. I thought this was a precarious supply chain, so I proposed to sell him an expensive machine that would give him peace of mind, and give me a nice start in the ice machine-selling business.

But he insisted that all he needed to do when he ran out of ice was send one of the bartenders over to a liquor store, where he would buy a big sack of ice for a couple of bucks. And while my ice machine might break immediately after the warranty expired, he didn’t ever have to worry about a bartender breaking.

I tried not to feel bad about how my first attempt at selling turned out. But I did.

If I couldn’t sell a friend something he needed, what could I sell, and who could I sell it to?

I was amazed at how my father did it. Jerry Leavitt had been selling restaurant supplies for almost 40 years. He rarely told any of his customers in advance what anything would cost.

“If you’re not happy with the value, don’t buy from me anymore,” he’d say.

A year or two before I tried to sell the ice-maker, Dad, in his late 60s, had been fired after over three decades with Edward Don & Co., then the largest purveyor of restaurant supplies on earth. The story was that he had extended too much credit to too many customers, some of whom had locked their doors and run away, or set their restaurants on fire, gone bankrupt, or just plain declined to write timely checks.

After his termination, he made a deal with a guy named Jack, who sold cleaning supplies out of a little warehouse-office around the corner from the Star’s Inn. Dad’s idea was to sell mostly the same stuff to the same customers, plus more janitorials, which Jack acquired at a price low enough to allow a healthy margin for both of them.

It occurred to me that I could contract for most of the hauling for both Dad and Jack in the enormous old Buick Estate Wagon I had bought for no particular reason other than it was cheap and rust-free.

This was good news to my father. He needed someone willing to stop at three or four wholesale suppliers on the way to his customers, someone who could be trusted to tear off all the labels so it looked like everything came from our warehouse, and get it all done the day after he made the sale.

Eventually, my dad and his new associate had helped me learn where to find hundreds of wholesale products a restaurant or institution might need. It’s knowledge that became mostly anachronistic with the arrival of the Internet, but it was valuable then.

And I got to watch my father work. I met a different person from the one I thought I knew.

On the job, he listened carefully. And he nurtured his relationships. He learned a smattering of everybody’s home language, and he often found out what his customers needed by talking to their employees. Some of these people had never been asked their opinions about anything.

I saw cooks running from behind their stations, wrapping their arms around the shy little old man when he walked in. A Jew with a high school education, he had friends among the tough nuns of Loyola and Mundelein, and the sharpies at Northwestern University.

I remember noticing that my deliveries to a West Side Catholic hospital had dropped from a weekly Buick-load to a couple of cases. I also noticed a young salesman walking happily out of the buyer’s office. It would be hard to miss him. He was wearing a tight-fitting, violet-colored knit suit with flecks of black and white.

“I won’t pay the guy,” Dad said, referring to the hospital buyer. “That’s stealing from the hospital.” Goods sold via payoffs usually, necessarily, cost much more than they’re worth, he explained.

“But the other guy will.”

I remember thinking that if the young salesman was going to steal, he ought to spend his ill-gotten gains more wisely than in the purchase of purple suits.

But crooks rarely develop fashion sense, or much of any other kind of sense. That’s because they never have to get smarter at anything but corruption. That becomes their real business.

It may occur to you that the reason some of the more repulsive politicians of our day seem so ignorant is that they have built their careers on something other than legislative priorities. They are, figuratively, the guys in the purple suits.

Today, as I write this, would have been my father’s 100th birthday. As time goes by, my memories of him recede.

But I’m sure I remember this. Every one of his two-for-one suits was solid gray or blue, or pinstriped. They were all perfectly tailored, and looked sharp.