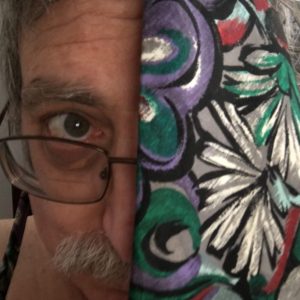 It seems impossible, but a tie like this can draw compliments. (Irv Leavitt selfie)

A few days after my daughter was born, we brought her over to my parents’ apartment so everybody could look at her.

She was bald as an egg. She was one of those kids who took eight months to grow hair. We put one of those lacy elastic things around her head so it didn’t look so naked.

But everything else looked amazing. She had a defined chin, a pretty little mouth and a breathtakingly beautiful nose. It looked like Brigitte Bardot’s nose, only smaller.

My brother-in-law Justin looked at me and then the child. “It’s a miracle,” he said.

“Look at that nose. This is by far the best-looking child to ever be born to a Levitansky from Suwalki,” I bragged, while insulting most of my relatives, ancestors, and our place of origin.

My mother would have none of it. “You know, she looks just like Irv when he was born,” she maintained.

This precipitated great mirth from all assembled. She stamped over to the closet to retrieve my baby book to prove her point.

She put it on the bed. Everybody arranged themselves excitedly around the bedroom as she dramatically opened it.

The face staring back at us did not look like Brigitte Bardot’s little brother. People said later that it looked something like Edward G. Robinson on the worst day of his life.

There was no neck. The head rested directly on an uneven mass of flesh that one would assume was a chest only because that was generally where a chest would be.

The head itself was significantly wider than it was high. It was roughly in the shape of a rugby ball, only it didn’t look that good. There were jowls of unusual size. They slopped over onto the chest-thing.

There was no chin at all. An irregular, thick-lipped mouth cut across humorlessly, like that of a particularly weathered Easter Island monolith. The nose was swinish.

Atop the head was a shock of unruly hair the color of motor oil from an engine destined to throw a rod.

The most striking features were the eyes. They were completely black, with no visible pupils, like a gerbil’s. The scariest gerbil on Earth.

Justin, standing behind my mother, whispered, “It’s OK, Ritta.” She shook her head silently and closed the book. It was the last time anybody saw it.

Many mothers remember their babies as more attractive than they really are, but not that much. I think Mom’s extreme detachment from reality was possible because I had been taken away to an incubator, so she didn’t see the horror that was me right away.

Meanwhile, all the nurses and everybody else who actually saw the little monster probably told her it was beautiful, so she was convinced of that by the time she was finally able to see for herself. By then, I must have looked presentable enough that they didn’t worry that she would try to drown me in a sink.

But I couldn’t have been beautiful, no matter what anybody may have told her.

I first noticed this years ago. I was wearing one of my favorite old neckties, which featured images of multi-colored frogs. I liked it because I assumed it was harder to get mad at a nosy reporter who was decorated with adorable little animals.

He looked up, a little startled. “Nice tie,” he said.

When I got home, I took off the tie, and regarded it fondly as I carefully put it away.

The next time I wore it, I somehow didn’t notice that it now was half brightly-colored and half dull-as-ditchwater. Nor the next time after that. I finally saw how terrible it looked a month later. Then I remembered: before I had talked to that politician, I’d left it on a windowsill. The portion exposed to the sun had apparently faded markedly.

So a guy who saw I was wearing an awful tie complimented it because I noticed he was looking at it. And I bought it. The power of the compliment, despite its insincerity, was so strong that it lasted for two more appearances.

This is The Ugly Tie Syndrome. It’s everywhere.

You see a man staring at your old wreck of a car. “That’s a classic,” he exclaims. You start looking at your 2011 Corolla entirely differently.

A lady’s caught eyeballing your wig. “I love what you’ve done with your hair.” You stop thinking of it as the mop you bought on sale on Milwaukee Avenue.

Your heart sinks as your offspring does a double-take at the gray stew on her plate. But she looks up with a smile. “Looks nice and hot!” You make it through another dinnertime.

You can’t take your eyes off the political slogan on your best friend’s hat. Finally, you smile, because friendship is precious.