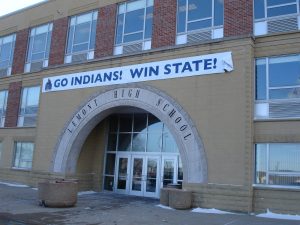 After a prize-winning novel was yanked from the classroom at Lemont High School District 210, parents are saying other books on the reading list are too racy to read, including the 1969 classic “I Know Why the Caged Bird Sings” by Maya Angelou.

The school pulled Booker-prize winning novel “The God of Small Things,” published in 1997 by Arundhati Roy, from the reading list of the Academic English II class, because the book “contains subject matter in some sections that is not appropriate for our students,” wrote Principal Eric Michaelsen in a Nov. 2 email to parents. “The questionable passages were not assigned for students to read. The books have been collected and will not be used again,” Michaelsen wrote.

But some parents were worried that other books also assigned are not age-appropriate either and too graphic for high school students.

“I think it was a big, huge wake-up call for parents who are questioning the school’s activities and looking at their actions and not trusting them,” said Laura Reigle, mother of a junior. Reigle said she thinks the selection of curriculum materials should be more transparent.

But anti-censorship advocates say when parents or school boards remove books from the reading list, they take away opportunities for all students.

“An English class allows students to read the finest written books produced by the best writers and grow their literary experiences in a safe place where they can talk about the books. What’s a safer place than an English class?” asked James LaRue of the American Library Association’s Office for Intellectual Freedom. “Here’s a question, do children really need to be protected from too much reading?”

Lemont parents and community members at the Nov. 21 school board said they wanted to pull Angelou’s autobiography off the class reading list.

“I’ve read some excerpts of [‘I know Why the Caged Bird Sings’] that include an 8-year-old getting raped; it’s very explicit,” said Mary Kay Fessler. “The sexual content is too much for their young minds to process. As an adult, yes, we can process that, but as a 14-, 15-,16-year-old, I don’t’ think they have the neurological [power] to process that.”

Resident Rick Ligthart came with a prepared statement of changes he wanted in the district’s policy.

“Regardless of the books, I’m recommending to the board that no literature whatsoever be inclusive of literal metaphorical, figurative or allegorical words for male or female genitals,” he said. Identifying himself as a former tenured school teacher he said, other than exceptions for state-mandated sex ed, “English classes should not be involved in sexuality in literature for our kids. It shouldn’t be in any books. No books.”

“The God of Small Things” is a debut novel described as a coming-of-age story of two separated fraternal twins in India who meet again as adults. Each of their childhoods is affected by current events in India such as state communism, the caste system and arranged marriages. Shortly after the book was released, Roy was sued in her home state of Kerala, India on obscenity charges.

“Any writer can be harassed in this way,” Roy told the New York Times in July, 1997. “It comes to the point where one citizen can hold literature to ransom.’’

According to the superintendent and a district spokesman, the Roy novel slipped through the curriculum approval process in error. New curriculum items are supposed to be publicly displayed by the board for a period of time and then approved by a vote of the board.

“Unfortunately, with “The God of Small Things,” this process was not followed. The book was introduced into our curriculum without approval of the board of education,” wrote Tony Hamilton, D210’s director of school and community relations, in an email.

The district will use this experience as a “springboard to review all materials that are used in our English classes — regardless of how long they’ve been a part of our curriculum — to ensure they are appropriate for our students,” he wrote.

As for the Maya Angelou novel, parents have the choice to have their child opt out of reading it, said Hamilton.

But Fessler and Reigle both complained the opt-out provision would embarrass their children.

“If I don’t agree with the book’s content, my kid would then be ostracized and read different material somewhere else,” Fessler said. “I don’t think that’s fair to the child,” she added.

“The parents don’t want their kids excluded from the classroom,” Reigle said. “Most of them sign that note because they don’t want the exclusion. It’s not right to exclude a kid from a classroom because of the material that you’re providing to them.”

Reigle points out the Department of Education categorizes “I Know Why the Caged Bird Sings” as appropriate for higher education classes.

The Angelou novel has been banned in the past by school districts and public libraries, according to the ALA’s Intellectual Freedom blog.

“I’m always sorry that people ban my books. Many times I’ve been called the most banned,” said Angelou in an Orange County Register article in 2010. “Many times my books are banned by people who never read two sentences. I feel sorry for the young person who never gets to read.”

“Calling the very complex Maya Angelou autobiography ‘pornography’ is an insult. It’s an attempt to take a much larger story and reduce it to a single label,” said LaRue. “That trivializes and reduces the value and depth of this complex literary work. It’s not fair and not accurate.

“I’m the father of two grown children,” LaRue added. Parents want to protect children on the cusp of adulthood, he said. “We say, ‘I don’t want them to know about this evil. But literature is a good way to get ready for the world.”

“The issue of censorship is something that is never dead,” said Robert Boyle of the Illinois Library Association. “There are always questions about what might be appropriate for young people to see and read.

“The type of people that go into that line of work, teachers and librarians, they want to create an atmosphere of learning that respects contrary opinions,” Boyle said. “That’s why schools sometimes offer alternative books.”

“These two books are both well-known, award-winning books that have been around for quite a while,” Boyle added. “Maybe the teachers were trying to select something that was well-written and told difficult stories that might engage their students in understanding the life and perspective of another person.”