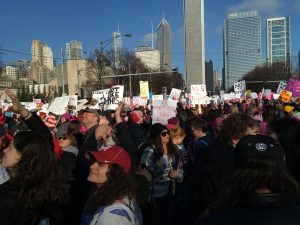 Saturday’s March to the Polls, which was born out of the Women’s March Chicago organization, is aimed at getting people to make a difference with their vote. (Chronicle Media file photo)

After significantly underestimating turnout at its first two events, organizers of Saturday’s March to the Polls are stopping short of making any predictions.

The event, born out of the Women’s March Chicago organization, is aimed at getting people to make a difference with their vote.

Saturday’s event, which will begin at 9 a.m. in Chicago’s Grant Park, will be different than the Women’s marches, Kraiem said. There will be fewer speakers and more music, a First-Time Voter Experience and a Voter Village, where attendees can interact with nonprofit groups and candidates.

“It will be like a street festival, but it will still culminate in a march,” Kraiem said.

March to the Polls evolved out of the first two Women’s marches.

“The 2018 Women’s March fueled March to the Polls,” Kraiem said. “We wanted people to get activated to vote. We felt it made sense to have an event in October to help educate, activate and inspire … We felt like talking to Women’s March participants about voting was like preaching to the choir. We wanted to reach out to get other people to the polls to vote.”

The event is meant to be nonpartisan with no candidates taking the stage to make a stump speech.

“We don’t speak to parties, we speak to values,” Kraiem said. “We want justice for people of color, immigrants, members of the LGBTQ community, marginalized people who are not getting what they need. We will highlight issues facing women. When women win, everybody wins. When you give a woman health care at work, it impacts the entire family.”

Kraiem said because a lot of people don’t vote in the midterm elections, Saturday’s event helps put emphasis on the upcoming elections.

“We want the country to flex its collective muscle and vote with their voices,” she said. “We are not telling people how to vote. We just want them to vote.”

Early voting will be available Saturday with both a Cook County and a Chicago early voting site being open.

Kraiem said organizers have a very ambitious goal of having 2,018 people cast their first ballot at March to the Polls.

All campaigns will have the opportunity to take part in the Voter Village. The day will culminate with a march through the streets of Downtown Chicago to Federal Plaza and access to the early voting site.

“We know that hundreds of thousands of women and their allies are excited and energized to vote this fall, and the march will enable us to come together and harness this energy and excitement and turn it into action,” said Jaquie Algee, Women’s March Chicago board member. “Women are organizing themselves and others to get to the polls and Oct. 13 is an activation point for that in Chicago. WMC plans for this event to be particularly special for those who are voting for the very first time, at a time when every vote is critical.”

Kraiem admits that she was one of those individuals changed by the first Women’s March in 2017.

“I volunteered at the first march. I didn’t know a single other person in the organization, but my life was changed. I have been a part of the board since 2017,” Kraiem said. “I have a 4-year-old niece. It is important for me to stand up for her. I want this to be a place for her to inherit. I want her to have every single possible opportunity. I want her to see what I believe in. We need to keep people motivated.”

Kraiem said it is of paramount importance that people head to the polls next month.

“This is an extremely important time to be active and vote,” she said. “… How this election pans out will influence us for years to come.”

— March to the Polls looks to energize voters —–