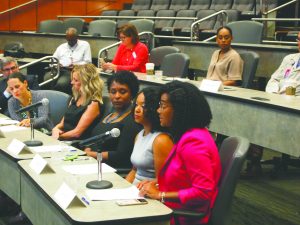 Dara Basley (right) maternal child health program manager for ACCESS Community Health Network, talks to a Congressional Maternal Health Field Inquiry convened at Advocate Christ Medical Center. She said although she has two degrees and is a newlywed, she is more likely to die in medical treatment because she is black than is a white woman with a high school degree due to treatment being different for different races. (Photo by Kevin Beese/Chronicle Media

A south suburban congresswoman wants to stop American mothers from dying during pregnancy and childbirth.

“We’ve already lost too many mothers to this crisis,” said U.S. Rep. Robin Kelly (D-2nd District) “It’s incumbent upon us to honor their lives with action — action that will prevent another mother from needlessly dying or another family from being torn apart.”

The Matteson congresswoman has introduced the Mothers and Offspring Mortality and Morbidity Awareness Act, which would establish a series of programs and requirements to address maternal mortality in the United States, including expanded coverage under Medicaid and the Children’s Health Insurance Program for pregnant and postpartum women.

The U.S. maternal mortality rate has doubled since the mid-1980s. Nationally, between 700 and 900 American mothers lose their lives to pregnancy or birth-related complications each year. It is estimated that more than half of the deaths are preventable.

Each year, nearly 100 Illinois moms lose their lives. More than three-quarters of the deaths are deemed preventable.

The congresswoman said the inquiry’s findings would contribute to a larger federal reporting and fact-finding effort to craft a national response to America’s growing maternal mortality rate.

“This inquiry — the first in a national series — will take us a little farther down the road to advancing legislation that will save mothers’ lives,” Kelly said. 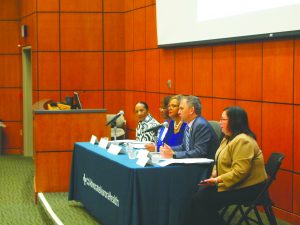 U.S. Rep. Sean Casten (D-6th) talks about the need for more to be done for mothers during pregnancy and childbirth. “As one of the most industrialized countries in the world and the leader in medical innovation, maternal mortality is far too common in our nation,” Casten said. (Photo by Kevin Beese/Chronicle Media)

“There is no outrage about lack of access in our communities,” Flowers said. “White people do not complain and say ‘Well, we need to do something over here.’ It’s not in a book. You have to get up and say something.”

“As one of the most industrialized countries in the world and the leader in medical innovation, maternal mortality is far too common in our nation,” Casten said. “Maternal deaths during pregnancy, delivery and in the postpartum period have been on the rise. This must end. I applaud Congresswoman Kelly for spotlighting this issue with her field inquiry at Chicago’s Advocate Health; and I’m looking forward to working with her and others on advancing the health of women.”

The panel heard from experts in the field including:

Additional Heidi House, a mother who nearly lost her life during childbirth, shared her story, telling lawmakers she did not feel listened to when problems arose.

“The troubling trajectory in the rates of maternal mortality and morbidity in the U.S. is alarming,” Keller said.

He said the Congressional Field Inquiry was an important first step toward shedding light on solutions.