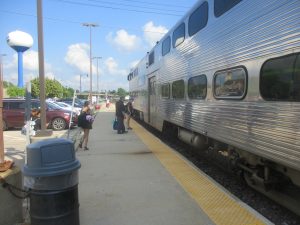 Passengers get on the Chicago-bound train at Harvard. Until July 15, the station had the most expensive fares in the entre Metra system. (Photo by Igor Studenkov/for Chronicle Media

Train riders in Kenosha, Wis. and some of the more far-flung north and northwestern suburbs and Chicago’s Far South Side neighborhoods saw their fares drop across the board for the first time in years as the Metra fare pilot launched on July 15.

As previously reported by the Chronicle, Metra previously considered a variety of changes to its fare structure. Ultimately, only some of those ideas were adopted. Metra Fare Zones M and K were merged with Fare Zone J, and several stations were moved one fare zone closer to downtown Chicago, reducing prices for all riders traveling to and from the direction of the city center. Metra also introduced an app-only day pass that works similarly to a monthly pass. Other ideas were rejected, and some were held back to be revisited at the later date.

The pilot will run until at least mid-2019, at which point, Metra Board of Directors will decide whether to keep any of the changes. As the documents on the transit agency’s website make it clear, ridership will be key. Reducing ticket prices means Metra will collect less money, so there will need to be enough new riders to make up the difference.

As with most commuter train systems, Metra fares are distance-based. Each line is divided into zones based on the distance from downtown Chicago, and the farther riders get from downtown, the more they have to pay.

The stations in fare zones J-M account for the smallest share of Metra’s ridership and has some of the most expensive tickets. According to a May 9, 2018 report to the board of directors, in recent years, which saw annual fare increases, ridership at those stations decreased more than in the rest of the system.

Metra hopes that putting all those stations into Fare Zone J will reduce ticket prices enough to attract more riders. 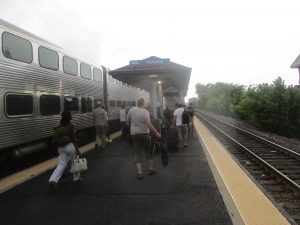 Passengers get off at the Kenosha Metra station, which, on July 15, has been moved from Fare Zone K to Fare Zone J, reducing the prices for all riders. (Photo by Igor Studenkov/for Chronicle Media)

Metra also originally considered moving Southwest Service Line’s Oak Lawn and Palos Park stations, Milwaukee District-North Line’s Forest Glen station and North Central Service’s Rosemont station one fare zone closer, but ultimately decided to only move stations that have no more than 150 daily boardings. While Rosemont station fits that standard, the May 9 report explained that 57 percent of the riders getting on the train at that station head to the suburbs farther north, so changing the fare zone would actually increase prices for most riders.

Finally, Metra is planning to introduce a one-day pass sometime this fall. Like a monthly pass, it allows unlimited rides between whatever fare zones are on the ticket. It costs the same as two one-way tickets within the same fare zone.  In a first for Metra, the pass would only be available on the Ventra app. The May 9 report states that this was done because conductors were concerned that riders would share passes.  The report also notes that only about 1 percent of the riders use more than one line. Between that and the price, Metra isn’t expected to lose any money — and it might attract more riders. 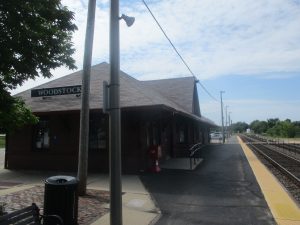 The Woodstock Metra station has been moved from Fare Zone K to Fare Zone J, reducing prices for all riders. The City of Woodstock believes that this will help both Woodstock riders traveling to Chicago and riders from Chicago and northwestern suburbs who are traveling to Woodstock. (Photo by Igor Studenkov/for Chronicle Media)

“Offering a day pass may encourage more riders to use Metra when more than one line is required to complete their trip,” the report states. “It might also encourage someone stopping off at a neighboring town for personal business or dining/entertaining before continuing their travels along that line. The goal would be to increase customer convenience, expand new markets for Metra, simplify fare payment for the customer, and encourage use of the Ventra App.”

As for the other proposals — changing the boundaries of Fare Zone A, equalizing the price difference between fare zones and introducing cheaper off-peak tickets — Metra decided to continue research them and potentially bring them back to the board of directors at a later point.

Metra Board of Directors approved the pilot during its May 10 meeting. As the press release issued at the time explains, the success of the pilot will depend on how many riders it will attract. For zone consolidation, Metra is aiming to attract around 110 additional “round-trip riders.” For the stations that were moved one fare zone closer, the goal is more modest: 60 additional round-trip riders.

Assuming the goals are distributed equally among every station, that would mean 22 more round trips for each station within the consolidated zones and seven to nine round trips within stations with changed zones

According to 2016 weekday daily ridership statistics — the most recent numbers publicly available — the number of riders getting on and off the trains in the former group range from 80-96 in McHenry and from 184-317 at the remaining four stations. For the latter group, Ashland station, which serves Calumet Park, has an average of 100 riders, but the other stations fall within a 40-55 range.

As the May 9 report acknowledges, the ability to reach the ridership goals is limited by the train schedules. Last fall, Metra reduced the number of trips on the Blue Line branch, especially on Saturdays. North Central Service line is weekday-only, and its schedule is limited thanks to freight traffic from Canadian National Railway, which owns the tracks. Only about one-third of Union Pacific North Line trains serve Kenosha, Wis. On the Union Pacific Northwest Line, only around half of the non-rush-hour trains serve Woodstock and Harvard. McHenry station is rush hour only, with trains leaving the station in the morning and returning back in the evening. 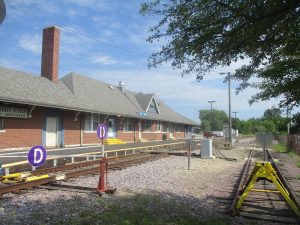 The McHenry Metra station has been moved from Fare Zone K to Fare Zone J. Unlike other stations in former Fare Zone K, this station is rush-hour only, so there aren’t any opportunities to grow ridership aside from workplace commuters. (Photo by Igor Studenkov/for Chronicle Media)

But for now, the municipal governments, businesses and organizations that spoke to the Chronicle were hopeful that the pilot would not only increase the ridership, but help their communities.

Nedra Sims Fears is the executive director of Greater Chatham Initiative, a community organization that works to enhance economic opportunities in several Chicago South Side communities, including two of the communities served by 83rd Street/Avalon Park station — Chatham and Avalon Park. She told the Chronicle that, if nothing else, the fare-zone changes are fairer.

“This is great news and provides fare parity between the 83rd/Avalon stop  [and] the 83rd South Chicago [branch] stop, which has already been zone B” Fears said.

In a statement to the Chronicle, Woodstock City Administrator Roscoe Stelford described the Metra service as an asset both for residents commuting to Chicago and tourists visiting the city from Chicago and other suburbs.

“We are very pleased that Metra is encouraging additional ridership with this fare reduction program,” he stated. “With the train station only steps away from our historic Woodstock Square, Metra rail service is the perfect way to visit Woodstock.”

Stelford noted that the number of tourists and other visitors coming to Woodstock has been growing, something he attributes to popular events and the city’s “artisan shops, award-winning restaurants, and a wide variety of concerts, plays and films at the Woodstock Opera House and downtown eight-screen Classic Cinemas movie theater.”

Firehouse Depot is a coffee shop located right next to Harvard Metra station’s parking lot. Its owner, Randy Donaldson, told the Chronicle that he noticed a visible drop-off of customers as fares went up in recent years. 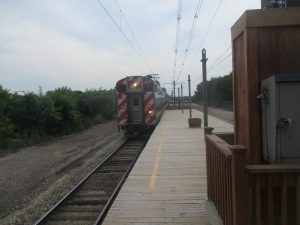 “[The lower fares] may bring people back to riding Metra,” he said.

Donaldson said that Harvard station draws riders from nearby municipalities in Illinois and southern Wisconsin, and having more riders would benefit not just Firehouse Depot, but all of the businesses in downtown Harvard. And personally, he said, he was pleased by the change for one particular reason.

“It’s just nice not to have the most expensive fares in all of Chicagoland.” Donaldson said.