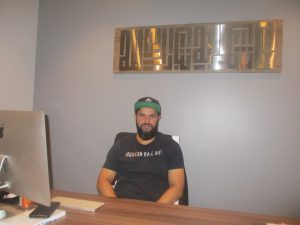 Even at the casual glance, it’s clear that there is something different about the wall decorations and furniture on display at Skokie’s Modern Wall Art gallery. The wavy designs have a pattern to them. And, as owner Syed Rahman and other employees would readily tell anyone who walks through the door, there’s a reason for that.

The designs are actually Arabic calligraphy, a form of calligraphy based on Arabic alphabet. Some pieces uses verses from the Quran, while others use phrases or individuals’ names. As Rahman explained, their goal is to take the customers’ visions and turn them into reality.

While Modern Wall Art isn’t the only company in the world to create this kind of art and furnishings, to Rahman’s best knowledge, it is the only one based in North America. And he told the Chronicle that what sets his company apart from others around the globe is that everything he and his team do is handmade and more customization than what is usually offered. And giving back is important to the company — it regularly collects money for humanitarian aid, and, in recent months, it has been doing more outreach in the community and getting more involved in various community events.

Rahman moved to Chicago area with his family in 2001, when he was in high school. As he explained it, while was interested in the design, he actually studied medicine in college. He didn’t take any classes in art and design, and when he created his first piece, it had nothing to do with making money. 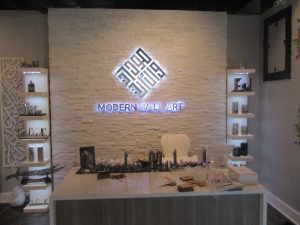 “I started this back in 2005,” Rahman said. “It was actually not a business — it was a hobby. I was looking for something modern and religious for my home, and there was nothing on the market, so I decided to make it myself.”

Rahman said that he made a few pieces that he sold on E-Bay. But it wasn’t until 2014 that, at his wife’s urging, he decided to try to turn it into a business. It started as a Facebook page. To his surprise, within weeks, it got “loads of likes.”

As Rahman readily acknowledged, the name “Modern Wall Art” sounded generic — but that was precisely the point. He wanted a “very simple and very catchy” name — something like “Home Depot” — which was evocative but generic. While Rahman said he was happy making art and furnishings involving Arabic calligraphy, he didn’t want a name that would limit him should he branch out.

Two years ago, he opened a physical gallery in Skokie, at 3552 Dempster St., a space previously used by Zelda Kosher Gourmet Since he lived in Skokie, it was a natural choice. And he said he is happy with his decision.

“Skokie is very supportive,” Rahman said. “They did a lot more, they invited me to a lot of events, they offered me everything. They went above and beyond helping me and giving me opportunities. I’m blessed to have my gallery in such a diverse neighborhood.” 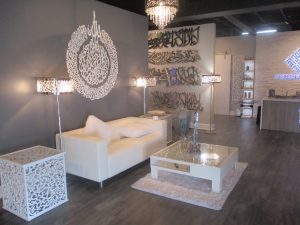 Modern Wall Art sells a wide variety of wall art and furnishings that uses Arabic calligraphy in its design. Some of those items are displayed in its gallery. (Photo by Igor Studenkov/for Chronicle Media)

Since Modern Wall Art gallery opened, its offerings have expanded significantly. It includes wall-mounted art, sculptures, clocks, mirrors, doorknobs, bookshelves, business card holders, floor lamps and coffee tables, among other things. And each type of item comes in many different shapes and sizes.

“We started out with 3-4 designs,” Rahman said. “We’re now the only company in the world that has that many calligraphy designs under one roof.”

And he and his team continue to innovate.

“Now, my art evolves,” Rahman said. “Whatever is trending, I like to make my art closer to that.”

Customers can either order items as is or ask for something custom made. Rahman emphasized that Modern Wall Art went beyond taking the existing design and putting a customer’s name on it.

“This business is a very custom business,” he said. “you tell me what you want and we make it for you.”

In many cases, the pieces’ calligraphy quotes a Quranic verse that’s tied to its function. For example, a floor lamp would have verse about light. Others are prayers, praise for the Lord or something that conveys God’s blessings. And that extends to custom pieces. Just as many Christians have favorite Bible verses, many of Rahman’s customers have favorite Quranic verses. So he often winds up asking customers what their favorite verses are and working from there. Ayat al-Kursi, a verse that speaks of God’s greatness and which Muslims often recite as a prayer for protection, is a popular request, Rahman said. 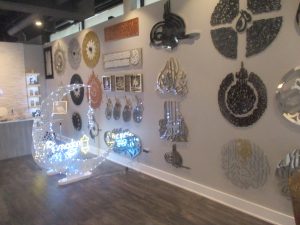 Modern Wall Art sells a number of wall art that uses verses from the Quran and Arabic-language words and phrases. (Photo by Igor Studenkov/for Chronicle Media)

At the same time, he emphasized that some pieces don’t use the verses, sticking to general words or phrases. And some pieces use names. Another thing Modern Wall Art frequently does is do pieces that incorporate names of the customer’s family members.

Rahman also emphasized that customers don’t have to be Muslim, or even speak Arabic and other languages that use alphabets derived from Arabic, in order to order from Modern Wall Art.

Once the company gets the order, Rahman comes up with the initial design. Then, he works with the artists on his staff to refine it. And, once the design is finalized, everything gets built in-house.

Rahman said he takes great pride in the fact that all of Modern Wall Art pieces are hand-made.

“When I think of art — I prefer for a person to make it [instead] of a machine, because a machine doesn’t know the value that goes into it,” he said.

And Rahman said that, while he was well aware that using machines would increase his profits, he said he wanted to do right by his employees.

“My business is feeding 15 families,” he said. “I want it to be something I enjoy. All my employees helped me to get where I’m at. I want to keep my team and, if at all possible, expand my team. Friends matter to me more than profit.”

Even after Rahman opened a physical store, most of the orders are still made online. He said that he doesn’t get that many orders from around Chicago and the suburbs. In the United States, most of the orders come from California, Texas and New York — something he attributed to those regions having “big houses and expensive suburbs.” 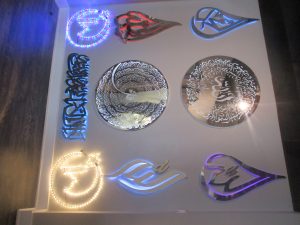 Modern Wall Art sells a number of wall art that uses verses from the Quran and Arabic-language words and phrases. (Photo by Igor Studenkov/for Chronicle Media)

Outside United States, Modern Wall Art gets orders from all over the world, including many countries that aren’t majority Muslim. In fact, most of his orders actually come from Canada.

“I ship to Canada almost every single day,” Rahman said.

He used social media to spread the word. But now that he has a gallery space he can invite people to, he has been doing more community engagement. For example, on March 10, he was one of the four businesses that took part in Visiting Muslim Neighors — a tour of four Muslim-owned businesses throughout Niles Township organized as part of this year’s Coming Together in Skokie and Niles Township program.

Rahman has also been opening his gallery to other artists and giving them an opportunity to sell their work on Modern Wall Art’s website.

“Basically, what I do is look for something which is really odd,” he said. “I collaborate with customers who have good customer service and have good art.”

Would Rahman be willing to open his gallery to more artists?

“Yes,” he replied. “I’m very open to having more artists with unique [work]. They should be something different.”

On the broader scale, Rahman tries to do what he can to help with various humanitarian causes throughout the world – something that, he says, he plans to keep doing for as long as Modern Wall Art exists.

“If there’s a country that going through war or oppression, I collect money on my Instagram page, and I give funds to a designated person who delivers money, or supplies [to the area in question],” he said.