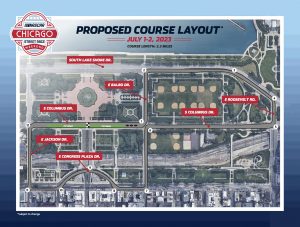 NASCAR plans to hit city streets as it returns to the Chicago area after a three-year absence.

Instead of roaring around a modified oval track in Joliet, the stock car series will showcase  Chicago’s downtown skyline, Grant Park and Lake Michigan as backdrops for an inaugural NASCAR Cup Series street race.

A two-race event is scheduled for July 1-2, 2023 according to a July 19 announcement by city and NASCAR officials.

The first-ever NASCAR street course race will take place on Sunday, July 2, 2023, and will be preceded by an IMSA sanctioned series race, which will run on Saturday, July 1, 2023.

The specific IMSA series joining the NASCAR Cup Series in Chicago will be announced at a later date. Both races will be surrounded by music and entertainment options for all ages.

“(We’ve) seized an incredible opportunity to add an unprecedented element to our schedule and take center stage in the heart of another major metropolitan market,” said Ben Kennedy, NASCAR senior vice president of racing development and strategy, in a statement. “This is the ideal setting for the first-ever NASCAR Cup Series street race. The NASCAR Cup Series Next Gen cars and the IMSA machines will race along the shores of Lake Michigan in downtown Chicago, marking a truly historic moment for our sport.”

The course will pass through the Grant Park, as well as approach the northern edge of Soldier Field, one of the most notable and recognizable sports venues in the country – and the site of the only other Cup Series race to take place in Downtown Chicago, in 1956.

“Chicago’s streets are as iconic as our skyline and our reputation as a world class sports city is indisputable,” said Chicago Mayor Lori Lightfoot in a statement. “I am thrilled to welcome our partners at NASCAR to Chicago for an event that will attract thousands of people to our city. Chicago’s world class entertainment and hospitality industries, coupled with our city’s history as a conduit for sports talent, make us the perfect hosts for this unique event.”

NASCAR events were held on the 1.5-mile oval Chicagoland Speedway track in Joliet from 2001 through 2019.

Tickets for the 2023 NASCAR Chicago Street Race Weekend go on-sale later this year at NASCARChicago.com. Additional details and elements of the weekend will be announced soon, and fans can follow @NASCARChicago on social media for the latest real-time updates on all aspects of the event.