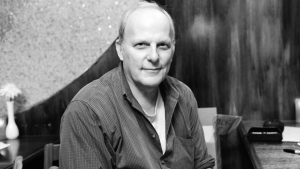 Dave Hoekstra declined to write a “me, too” book about Disco Demolition. Instead, he framed the coming-out party for young Detroit import Steve Dahl in the gritty atmosphere of Chicago’s South Side. (Photo courtesy of Curbside Press)

One aspect of the fabled Disco Demolition Night author-broadcaster Dave Hoekstra could not re-confirm was how old Comiskey Park was “seeded” with cannabis by some of the rampaging fans.

But Bossard, then and now, regards all his fields with special TLC. The destruction caused by WLUP deejay Steve Dahl’s “Insane Coho Lips” anti-disco crowds was always painful for Bossard to remember. Hoekstra could not really get a detailed play-by-play of the aftermath from the third-generation South Side groundskeeper.

Bossard’s reticence was the exception in Hoekstra’s just-released book “Disco Demolition: The Night Disco Died,” as the July 12 anniversary of the twi-night doubleheader-turned-concert riot passes. A pop culture-sports renaissance man in his decades with the Chicago Sun-Times, and still in the limelight with seven books and a two-hour Saturday-night eclectic program on WGN-Radio, Hoekstra covers the macro and micro of Mike Veeck’s manic brainchild.

Who else but a man who appreciates the little nuances of life would discover outfielder Rusty Torres was the only player involved the three 1970s events resulting in home-team forfeits when thousands of fans stormed the fields?

Torres was in the Sox lineup for Disco Demolition, when the second game was forfeited to the Detroit Tigers as thousands invaded Bossard’s turf after Dahl and female sidekick Lorelei supervised blowing up a host of disco records in center field between games. Admission on what the Sox had billed as “Teen Night” was 98 cents (in reference to WLUP’s 97.9 FM frequency) and a disco record.

Torres also was a pinch-hitter for the Indians for Municipal Stadium’s 10-Cent Beer Night on June 4, 1974, forfeited to the visiting Texas Rangers after Cleveland fans attacked outfielder Jeff Burroughs and umpires. And he Torres was a Yankees rookie in the lineup when fans flooded RFK Stadium’s field with two outs in the ninth in the Senators’ last game in Washington on Sept. 30, 1971, before moving to Texas. The Nats were leading 7-5 with two outs in the ninth when the crowd burst forth, but still had to forfeit when the field could not be cleared.

Of course, there’s a Twilight Zone twist to Torres, perfect for Hoekstra’s storytelling.

With extensive video of Disco Demolition Night available on YouTube and myriad documentaries and photo exhibits already produced, Hoekstra declined to write a “me, too” book. Instead, he framed the coming-out party for young Detroit import Dahl in the gritty atmosphere of Chicago’s South Side. Baseball was just the appetizer for myriad angles uncovered by Hoekstra, who attended the scheduled doubleheader with a date named “Miller,” but left as soon as the fans surged onto the field.

Dahl asked Hoekstra to write the book. Although Dahl’s name is on the cover as author “with Dave Hoekstra and (photographer) Paul Natkin and his smirking youthful image shows off his “Disco Sucks” T-shirt, Hoekstra did the interviewing and writing. He snared “Better Call Saul” star Bob Odenkirk, a Dahl fan, to pen the forward.

“We had a couple of meetings with Steve and the publisher,” Hoekstra said. “What I wanted to do was move the needle off Steve himself and kind of tell a sociological story. One of the important things to know is about Chicago neighborhoods. How do Chicago neighborhoods define the teams? I wanted to cast a wider net than just Steve Dahl and Disco Demolition.

“I get into Bridgeport. I was one of the last people to talk to (barkeep) Jack Schaller for a project like this before he died. I took (ex-Sox and Cubs pitcher) Steve Trout over to Schaller’s Pump. It was important to talk about how disco music birthed house music. House is one of the most important musical exports in Chicago right now just right beneath the blues.”

Trout was joined in his memories by then-Sox teammates Ed Farmer (now the team’s radio announcer), Thad Bosley and Ken Kravec. Those involved in the staging and promotion of the affair are included. Representatives from the music world included Harry Wayne Casey, frontman of disco pioneer KC and the Sunshine Band, along with Dennis DeYoung, Chaka Kahn, Rick Nielsen, Jim Peterik and Nile Rodgers.

Then a journalism student at the University of Missouri, present-day Chicago Tribune baseball columnist Paul Sullivan has on several occasions recalled his sliding into bases during the riot and taking a bottle of booze into the visitor’s dugout, where it was confiscated by a Tigers coach. Sullivan is certainly not forgotten by Hoekstra.

Perhaps the most poignant narrative in “Disco Demolition” was the near-future fate of Mike Veeck, son of Sox owner Bill Veeck and the team promotions director who cooked up the promotion. After his father sold the team to Jerry Reinsdorf and Eddie Einhorn early in 1981, Veeck couldn’t get a job for years in sports. Fortunately, in recent decades he has made a comeback as the promotion-minded owner, teaming with Chicago-born comic Bill Murray, of several independent-league baseball teams.

While Dahl and former broadcast partner Garry Meier are close at hand, Hoekstra had a challenge tracking down ingénue Lorelei. He finally found her in Los Angeles.

Disco might not have been the only cultural trend that died on July 12, 1979. Fans typically engulfed fields in the 1970s when their teams clinched a pennant or even when a pitcher threw a no-hitter. Symbolically, ushering in a new era with a conservative president about to win election, horse-borne cops prevented Phillies fans from storming Veterans Stadium’s artificial turf when the Phillies won their first World Series in 1980.

Some things go full circle. Dahl now plies his trade as a talk-show host on WLS, the Sox’s originating station.

“I think that’s great,” Hoekstra said. “I told someone, ‘The Sox should embrace Disco Demolition.’”