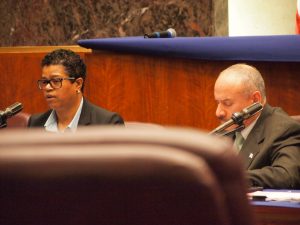 Sydney Roberts, recommended chief administrator for Chicago’s Civilian Office of Police Accountability, talks with Chicago aldermen during a City Council committee meeting last week. Roberts has more than 30 years’ experience in state and local government, where she had involvement in investigations of allegations of wrongdoing by civilian and sworn personnel. Next to Roberts is Ald. Ariel Reboyras (30th Ward), chairman of the council’s Committee on Public Safety. Reboyras said Roberts has his full support (Kevin Beese/Chronicle Media)

The likely head of the citizen board for Chicago police accountability said transparency will be a key part of her administration.

Sidney Roberts, who has been pegged by Mayor Rahm Emanuel to head the Civilian Office of Police Accountability, said she views complainants as her clients and will let citizens know what is going on with investigations and other matters, especially high-profile cases.

“In cases that get a lot of media attention, I would be as transparent and open as possible regarding the outcome and the release of that information,” Roberts told aldermen during a City Council committee meeting last week.

COPA has come under fire for not being forthcoming with information, such as bringing in outside personnel to conduct investigations and then not providing the results of that person’s findings to Police Superintendent Eddie Johnson, aldermen and the public.

Roberts will not become official in the position until approved by the City Council at its April 18 meeting.

Ald. Nicholas Sposato (38th Ward) told Roberts that he has continued to have problems with the office she will be overseeing. He said he has continually been stymied when seeking information.

“I hate to play the game ‘I Am an Alderman,’ I know there are things you can and cannot say,” Sposato said. “(Former COPA Chief Administrator) Sharon (Fairley) never, ever had a problem returning any of my calls, but the COPA staff has.”

Since 2010, Roberts has served with the Secretary of State’s Department of Police, first as chief deputy director, then as director where she oversees all statewide investigative districts as well as the security of the Illinois State Capitol campus. She has more than 30 years’ experience in state and local government, including investigating allegations of wrongdoing by civilian and sworn personnel.

She served as first deputy and then chief operating officer for the Illinois Office of  Executive Inspector General, leading investigations of fraud, waste, abuse and misconduct. Before that, she was inspector general for the state Department of Human Services. She was also a police commander in Maywood where she led internal affairs efforts.

After a five-month review, a COPA search committee unanimously recommended Roberts as the next leader of the city’s civilian police accountability agency

“Sydney Roberts has done an outstanding job as director of the Illinois Secretary of State police and she is an excellent choice to serve as chief administrator for COPA. Sydney brings legal training, a law enforcement background and an ability to work well with people from different points of view,” said Illinois Secretary of State Jesse White. “She will do very well in this position.”

Roberts said she expects to be the face of the investigative agency.

“We need to look at victims’ rights. We need to go out and meet with people, go out to the organizations to get input, go across the city,” Roberts said. “I am very concerned that someone from COPA goes out to meetings and it is important that the person be me. I need to send the message about law enforcement. The community needs to know that I am concerned. That is what I am about.”

Ald. Ariel Reboyras (30th), chairman of the City Council’s Committee on Public Safety, said that Roberts has his full support.

“Sydney Roberts is the right person, at the right time, for the right job,” Reboyras said. “Sydney will not only uphold COPA’s core values of integrity, transparency, independence and timeliness, she will work closely with Chicago residents and lead this important organization into the future.”

While the search committee had the opportunity to recommend multiple candidates, by unanimous consensus, the panel determined Roberts was the best applicant for the post and submitted only her name for consideration.

“Sydney was the unanimous choice of a very diverse and highly motivated search committee,” said Paula Wolff, director of the Illinois Justice Project and search committee co-chair. “In addition to her years of management experience and her superb investigative skills, we were impressed with her passion for public accountability and respect for the rights of all residents of Chicago — community members and police officers alike. Those who know her and have worked with her uniformly commented that ‘she will always do what is right.’”

“This search committee deserves all our thanks for volunteering their time and expertise to work collaboratively in support of this city’s efforts to create a strong, lasting system of police accountability,” Emanuel said. “This diverse group represents many communities in our city, and their vote of confidence in Ms. Roberts is an encouraging step forward.”