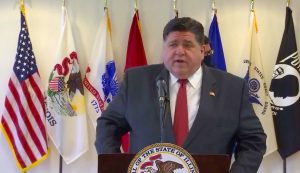 Gov. J.B. Pritzker answers questions during the ceremony to open a new veterans’ home on Chicago’s Northwest side on Wednesday, Nov. 11. (illinois.gov)

The home is the first state veterans retirement facility to open in 20 years and the first to serve the Chicago area. Prior to construction of the Chicago home, the closest veterans’ homes were located in Manteno and LaSalle, causing hardship for those wishing to remain in their communities.

Completion of this long-awaited facility was made possible through funding in the FY20 budget. The home will accommodate 200 retired Illinois veterans.

“As the proud son and grandson of Naval officers, I have a very personal commitment to Illinois’ nearly 650,000 veterans,” said Pritzker. “It’s my mission that Illinois will provide every possible support for our military men and women, their families and our veterans — those who have made sacrifice upon sacrifice so all of us can live free.’

Duckworth, a 20-year veteran of the U.S. Army who lost both her legs in battle, said it was fitting they were gathered for the opening of the center on Veterans Day, but the attention on veterans’ issues needs to be year round. 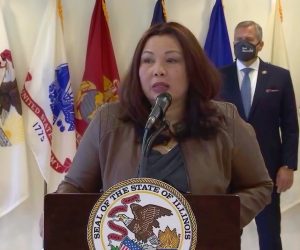 : U.S. Sen. Tammy Duckworth speaks at the dedication and opening of a new veterans home on the Northwest side of Chicago on Wednesday, Nov. 11. (illinois.gov)

“Our veterans have sacrificed the unimaginable for the rest of us, putting country over self and redefining bravery time after time, tour after tour. It’s on us to make sure we don’t just pat our veterans on the backs on Veterans Day — but honor them on the other 364 days of the year, too,” she said. “That means expanding access to safe, affordable housing because we are all dishonored when any Veteran is forced lay their head down to sleep on the same streets they defended.”

The new 187,000 square foot, five-story facility is located on the Northwest side of Chicago and embraces the U.S. Department of Veterans Affairs Community Living Center (CLC) guidelines, which advocate a culture change from a medical model to a resident centered model of care. Unlike many nursing homes of the past, a community living center resembles a family home as much as possible.

The architecture of the Chicago Veterans Home supports this resident focus by creating 16 total “households.” Four of the households are specifically dedicated to residents with dementia care needs. Each floor is outfitted with original artwork in the form of colorful murals by local artist Indira Johnson.

“On this day when we honor those who bravely sacrificed everything for our freedom, it is fitting that we open this facility,” said Linda Chapa LaVia, Director of the Illinois Department of Veterans’ Affairs. “Though we can never repay the debt we owe to these fine men and women, we can honor the moral obligation we have to provide them with the best care available in their twilight years. We must take care of those who have taken care of us”.