For a vaudevillian who can ad lib like a pro despite no cue, telling the story of Dec. 7, 1941 causes the broadcaster in Jack Coombe to pump up the volume.

At 94, Coombe, of Northbrook, a U.S. Navy veteran who was at Pearl Harbor when it was attacked 75 years ago, raises his voice with inflection upon recalling a dramatic Sunday in Hawaii that started out as calm.

“I remember the morning, it was a beautiful morning as always in Hawaii,” said Coombe, an author of eight books. “I went out to watch the flag raising, that’s always a big thing to Navy men,” Coombe said, about Pearl Harbor. “Of course we’ve got to be there, we’ve got to salute.

“Pearl Harbor, it was kind of like an awakening to me,” said Coombe, who was interviewed at his Northbrook residence on Nov. 28. “I was taken out of my childhood and thrown into manhood.” 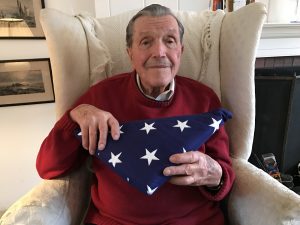 “I remember the morning, it was a beautiful morning as always in Hawaii,” said Jack Coombe, World War II Navy veteran. “I went out to watch the flag raising, t

Coombe, who can be seen on NCTV Channel 17 in Northbrook as a cable television talk show host, has lived in Northbrook since the early 1960s with his wife Peg whom he married in 1947. His show business career in radio and vaudeville began during his youth in Virginia, Minn.

Also a radar man with an enlisted military service from 1940-46, Coombe is a rarity.

He’s among the dwindling number of witnesses willing or able to recount the day World War II started for the United States.

“Pearl Harbor was unexpected, we know that,” Coombe said.

“The Japanese had made some preliminary moves in the Pacific, which worried us a little bit.

“We figured that they were up to something but certainly, they’re not going to attack us, we’d be the last country they would attack,” Coombe said.

“How wrong we were.”

Post-traumatic stress and memory loss can challenge veterans of combat. But Coombe becomes the animated storyteller during his playback.

“I think it toughened me,” Coombe said. “I’ve been searching a long time, trying to really put it all together.”

The first plane to appear in the Pearl Harbor sky didn’t cause alarm. Coombe said there was another air base nearby.

“The next thing you know, another plane came in,” said Coombe, who was on the runway. “I was caught right in the middle of it. He came in low.”

The pilot opened up both wing guns.

“I saw him coming and I figured I better get the blazes out of here,” he said. “So I turned to run.” 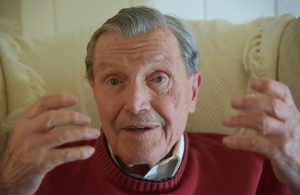 At 94, Jack Coombe, of Northbrook, a U.S. Navy veteran who was at Pearl Harbor when it was attacked 75 years ago.

Bullets peppered each side of Coombe. The pilot also dropped a bomb.

“And that was really the very first opening of the attack on Pearl Harbor,” Coombe said.

Three quarters of a century later, in his living room wingback chair, Coombe’s upper body lurched forward at the idea of being hunted.

Coombe was at a military dinner with veterans. He got to talking to a man who served in the Imperial air force. The man asked Coombe if he remembered the Japanese plane.

“And he went like this,” Coombe said. “‘I don’t know how to tell you this but I was the pilot of that plane. I remember you running along the tarmac at Pearl and I decided I was going to get you. And I went in and opened up my wing guns and I saw the bullets going on each side of you. You were running, that was you?’”

“I can say we got drunk together,” Coombe said, with a laugh.

“We hugged each other and I thought, ‘I’m hugging the man who tried to kill me!’” 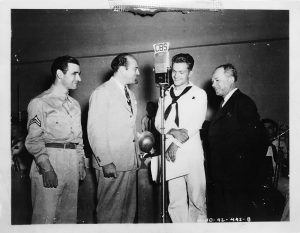 Jack Coombe (second from left) of Northbrook during his tour of duty with the U.S. Navy during World War II. (Photo courtesy of Jack Coombe)

Coombe told this story within earshot of his wife.

A former Navy first class seaman who has interviewed celebrities, he has dined (and drunk) with Clark Gable (“He preferred to be called ‘Gable.’”).

Coombe knew Boris Karloff (“He was very well-read.”) and Judy Garland (“We used to dance and sing together.”).

In Hawaii, where Coombe hosted a 1940s radio show, “Hello from Hawaii,” he almost got into a dogfight with Joe DiMaggio over Marilyn Monroe.

“I thought we were going to come to blows over it,” he said. “She was a sweetheart. He (DiMaggio) kind of dampened it a little bit.

“I knew we had a thing going, let’s put it that way,” Coombe added, about the emerging starlet who was “very intelligent and knowledgeable.

Of their budding relationship: “It was kind of unspoken.”

Coombe said Monroe kissed him on his right cheek.

“I didn’t wash my face for a week, I wanted it to last as long as it could!” Coombe said.