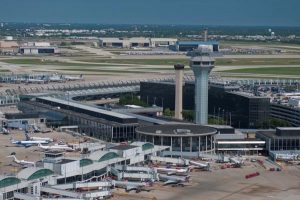 The city’s black aldermen say they are fed up with a lack of contracts and jobs at Chicago’s two airports going to blacks and city legal work continuing to go to predominantly white law firms.

In a show of support at the Sept. 14 City Council meeting, black aldermen nearly derailed the issuing of $3 billion in bonds for O’Hare International Airport. With three aldermen recusing themselves from the vote because of financial dealings with the Chapman & Cutler law firm, picked to coordinate the bond sale, the vote was so close that Mayor Rahm Emanuel refrained from the getting the final vote tally until Ald. Gilbert Villegas emerged from a back room and cast an “aye” vote.

The proposal passed 26-21, the minimum vote count required for passage of legislation in the 50-member voting body. The three aldermen recusing themselves could not be counted as “yes” votes.

“The reason I’m voting ‘no’ is that the non-federal contracting numbers for African-Americans are alarming and are appalling,” Alderman Pat Dowell, a member of the council’s Black Caucus, said. “This is where they are doing more outreach and hand-holding and providing more assistance. The contact under federal contract is even more egregious.”

Dowell said there has been $123 million paid out to city airport-related contractors this year and only 28 percent, or $34 million, has gone to minority firms. She said just 8 percent of the Chicago Department of Aviation’s work has been awarded to firms owned by blacks.

“In addition, the diversity in the department staff is severely lacking, especially when you look at the staffing at Midway Airport and also the direct reports to the commissioner (of aviation),” Dowell said.

She said firms like Chapman & Cutler that are looking to do bond business with the city are also lacking in diversity.

Dowell said she was pleased to hear that the Aviation Department has agreed to meet quarterly with a host of council members to address diversity issues with contracts. She said it is also encouraging to hear that staff in the mayor’s office will convene federal lawmakers to discuss what the city can do to increase minority hiring.

“But talk is cheap and these companies continue to get paid and, at some point, we need to continue to look at this issue and work on this issue, not just at the time that we take a vote but also throughout the rest of the year.”

Recusing themselves from the vote were Aldermen Edward Burke, Roderick Sawyer and Patrick Thompson.

Hairston said the city needs to be a generator of jobs and business for the black community.

“Black businesses are hurting,” Hairston said. “People do not have jobs in their community. They don’t have the hope of anything new being built in their communities, and the one place that can provide support for them is the city of Chicago in the projects and in the different departments that they hold. Those departments and those projects do not look like the city of Chicago.”

Hairston, a lawyer, said she is battling for equal business opportunities for herself and other blacks just as when she earned her law degree 26 years ago.

“It’s a shame that I have been practicing for so long and (the issues) are still the same,” she said.

Taking a swipe at Chapman & Cutler and other predominantly white law firms, she said something has to change.

“There are not any African-Americans in these firms and enough is enough,” Hairston said. “If we don’t stand up now, they are going to continue to do the same thing and give us a different story and I have heard this story too many times and I’m not buying it.”