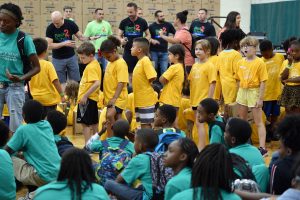 Approximately 10,000 kits, filled with more than 300,000 school supplies, were distributed  Aug. 8 by Back 2 School Illinois to assist Chicago area students.

The effort included distribution to 40 area YMCA locations. Representatives of those organizations, in turn, disseminated school supplies to students in YMCA service areas.

Shortly after noon Aug. 8 400 children received their kits in the gym at Broadway Armory Park, 5917 N. Broadway Ave., in Chicago.

“It’s all about getting them ready for school.

“It’s all about providing supplies to those in need who come from families that are struggling financially,” Kurtzman said. 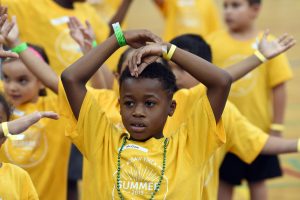 Exercise was part of the event. (Photo by Karie Angell Luc/for Chronicle Media)

The organization (www.b2si.org) is a Chicago-based nonprofit that provides tens of thousands of Illinois kids with free school supplies with a goal to help them succeed in the classroom.

“There are 1.2 million kids every year in Illinois who are in low income households,” Kurtzman said.

Students ages 6-12 arrived one hour before kit distribution for planned activities such as science experiments and demonstrations, crafts, dance party exercise plus an animal viewing program.

Approximately 200 volunteers, along with staff, assisted that day. 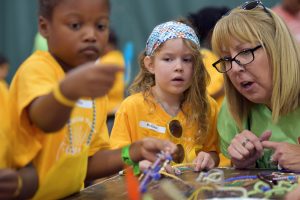 “They’re amazing and I want to thank them for their support,” Kurtzman said.

“I really feel that this is a community that has to help kids get a better education.”

“I just want to give back to the community,” Lu said. 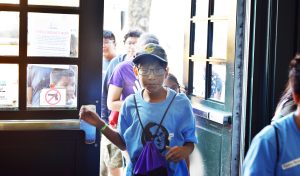 Children, brought by school bus, enter the doors of the Armory for the event. (Photo by Karie Angell Luc/for Chronicle Media)

“I volunteer whenever I can, mostly with seniors,” Nealon said. “This is the first time for kids. It’s exciting.”

Nealon added, “I like to see the smiles on the kids’ faces. It’s a great cause.”

Frank Lenardi, associate executive director of the Pav YMCA of Berwyn, said he was here to collect school supply kits for redistribution at an August Sunday picnic.

“The school districts in our town have students who aren’t able to necessarily afford school supplies,” Lenardi said.

“We actually pass out about 750 kits to help the students,” he said.

Lenardi said the Pav YMCA receives requests from income qualified families for assistance with YMCA programming and other needs, including educational supplies.

“We just try to do everything we can to help out,” Lenardi said. 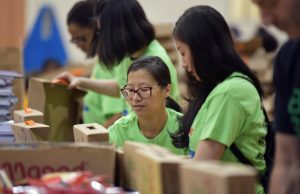 Notes of inspiration, written by volunteers, were tucked inside cardboard kits along with the school supplies.

“The reality is, is that what we’re doing here today is really about self-esteem, it’s about preparing the kids for school, it’s about really letting them know that we’re giving them the tools that they need to succeed in the classroom,” Kurtzman said.

Eman Hamdan of the McGaw YMCA of Evanston chaperoned children who got to see a small animal show.