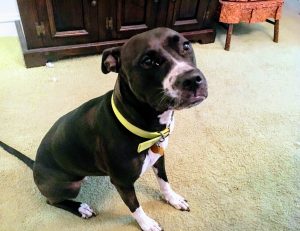 Something very strange happens to columnist Irv Leavitt when Callie the dog looks at him this way. But that does not mean she’s a space alien.

I lived for years with a woman who hated dog parks.

Helen was perturbed with dog owners — especially young couples — who sought special rights, saying that they ought to just have children, and suffer with the rest of us.

“Dog people,” she would grumble under her breath, as she stepped onto the parkway so a neighbor and his Rottweiler could have the sidewalk to themselves.

Dogs, she said, should be the problem of those who own them, and no one else. If you have a dog, move to the suburbs, where mansions are interspersed with woods, swamps and jungles rife with other beasts that dogs can associate with as peers.

The idea of an urban dog park was as ridiculous to her, she said, as was an urban golf course. Both were wastes of space that would be much better used for almost any other purpose.

“Even prisons?” I asked.

“Yes, even prisons,” she replied, upon reflection. “Criminals are preferable. They almost always poop in the toilets, don’t they?”

She had been stunned at the idea of a dog park on the shores of Chicago’s Lake Michigan, which, as A. Montgomery Ward had vowed, would remain “forever open, clear and free.” Clear and free, she maintained, certainly included clear and free of barking and peeing and humping.

Having forgotten the words of the Ward quote, I just looked up “Lake Michigan forever” on Google. The first page had only two entries, repeated over and over. One was titled “Walk into Lake Michigan Forever, Scott Walker,” apparently expressing a desire that the Wisconsin governor should, as we used to say, take a long stroll on a short pier.

The others were various versions of “Dog Rescued from Lake Michigan Finds Forever Home.”

Helen didn’t like the term “forever home” very much. Though she volunteered weekly in an animal shelter — for cats, of course — she avoided her fellow volunteers outside its walls, saying they cared a little too much about four-legged welfare.

“There are actual people sleeping outside,” she exclaimed. “I never hear about them getting a ‘forever home.’”

Just for grins, I asked Google to look up “Dogs are better than people.” There are lots and lots of entries.

I personally enjoy the company of dogs, but not even close to how much I like representatives of my own species.

In my entire life, I have only truly respected one dog the way I would respect a person. The dog’s name was Mike, and he lived on the second floor of the apartment building next door when I was a boy.

He was a poodle, but his master, Mrs. Wylie, had him cut like a terrier. “No self-respecting dog should look like that,” she said, referring to a traditionally cut poodle named Puff, who lived on the third floor with her sister, Mrs. Denson and her family.

Puff was a girl dog, and most of the boys on the block would have nothing to do with her. Mike tried for a while, but she demurred.

Mike, however, was popular. He was always ready for adventure, and if you weren’t quite as brave as he, he’d turn around and laugh at you.

It was either that, or he was doing that dogs-sweat-through-the-mouth thing. Hard to tell.

Mike didn’t like to stay inside. I remember the time he was imprisoned up there and he decided to do something about it.

Suddenly, the window screen was torn, and Mike was flying through the air, laughing and sweating.

He landed hard on the concrete, rolled over once, and took off down the street.

He didn’t come back for a couple of days. When he did, he had a limp and a gleam in his eye.

Around the time I left home, my sister, already on the loose, dumped a mutt on my mother. She thought, incorrectly, that mom was going to be heartbroken with no one left to pick up after.

The dog was part Lhasa Apso and part something else. He was named Pookie, and was lost in a great poof of black and white fur.

Mom immediately had him cut like a terrier, and started treating him like the sailors she had pushed around when she was a Navy CPO. He responded, and quickly developed a classy and dignified disposition.

That was, until July rolled around. He revealed an unfortunate tendency to become incontinent upon hearing the sound of fireworks.

He spent many summer nights confined to the kitchen floor after that.

A couple of years ago, a dog started staying at my place. It was not my idea, but she doesn’t eat much, and she goes for months at a time without decorating the carpet, so fine.

Callie is not a dog that commands a lot of respect. She is half pit bull and half black Lab. The pit bull part provides the natural kindness, and the Labrador part, the stupidity.

She loves children, and likes older people and some dogs. She especially likes little white dogs. She likes to eat them, if she gets a chance.

This has not happened yet, which is a good thing for her. Not only would it create tension in the neighborhood, but she has a sensitive stomach.

I grew up with dogs that delighted in taking a mid-morning snack from a garbage can. Callie, however, winds up at the vet if she snatches a gram of American cheese off the floor.

She has some habits I do not appreciate. As soon as I pick up the leash, she goes through an elaborate ritual of stretching. She is not preparing for the physical trials of taking a nice trot down the sidewalk. She is hoping that I will become so annoyed waiting for her that I will just open the door and let her go.

Each time, I put my foot down, and tell her to sit. She then consistently finds fascinating things to turn her head to look at, such as the drapes and chairs.

When I finally get the harness on, however, we go down the stairs, and she dutifully pauses at each landing. She’s careful not to drag me down the steps, leading to my premature death or crippling injury. I appreciate that.

There are a few other charming things she does. When I hurt myself, she licks the wound, which is allegedly a doggie thing, rooted in the wolf-pack instinct, to help each other heal.

It’s either that, or she likes the taste of human blood.

She also goes absolutely nuts when I come home. No one has ever given me a reception like Callie. That is lucky, because if a human slammed into me as she does, disks would be slipped in no time.

Every once in a while, she seems to stop and ponder some situation or another. She never seems to figure anything out, of course, because she has a brain about the size of a walnut.

But when she strikes that curious pose, something happens to me. I get what you might call a chill, or shiver, in my back.

I don’t get it from cats.

But I regularly get it from Callie, and from some other dogs, now, too.

No, I don’t think that’s it. I love my daughter, but she doesn’t give me the trembles.

This is one of those suggestions you can’t possibly prove or disprove. I can say, however, that I have very few doglike qualities, if you don’t count the years of misplaced canine-like loyalty, wasted on undeserving media corporations.

“Callie is from outer space, and is affecting you physically through telepathy.”

I don’t know how smart you have to be to be telepathic, but however smart that is, Callie probably isn’t. She slept every night for a year in a room with two doors before realizing she didn’t have to go through the same one every time.

Here is my best guess. Most people who have dogs at home get their first extended experience as a child. I didn’t get mine until decades later.

So I may be evolving late, but at a high rate of speed to make up for lost time. That, apparently, has side effects.

—- Our dog can’t digest most earthly food, but I’m pretty sure she’s not a space alien —