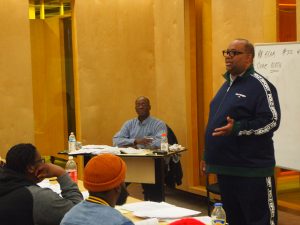 Pastor Corey Brooks speaks to a trades class at the Project H.O.O.D. job-training facility. In addition to the training facility, Brooks is also looking to create a $25 million community center in Chicago’s Woodlawn neighborhood. (Photo by Kevin Beese/Chronicle Media)

Where everyone else sees a basketball court, Corey Brooks sees a community center changing the lives of residents of Chicago’s Woodlawn neighborhood.

Brooks wants to build a $25 million facility brimming with educational, social and recreational opportunities for residents of the long-ignored city neighborhood.

Instrumental in the demolition of a motel that was a hub for drug-dealing and prostitution across from his New Beginnings Church on the 6600 block of South King Drive, Brooks now wants to see that property — which currently serves as an outdoor basketball court — turned into the community center.

“We need to do what we can to enhance the lives of people,” Brooks said during a recent interview in a converted Walgreen’s that serves as the Project H.O.O.D. job-training facility. “That’s what we are all about.

“We are trying to do something that addresses the educational issues, the economic issues, the social issues that people are concerned with every day.”

The Project H.O.O.D. training facility, just blocks from the church and proposed community center, trains participants for work in the trades, “where they can earn a living and get benefits,” he said.

The trades classes hold up to 32 students per session.

A culinary program will soon be added to the facility’s curriculum.

“This is all to provide jobs to residents of the area, allowing them to be self-sufficient,” Brooks said.

It took the pastor more than three months of living on the roof of that motel in 2013 to get enough attention on the situation to get the facility torn down.

“Children going to school would pass by it. There were people there with addiction issues and morality issues. It was just a problem,” Brooks said.

He knows he has just as hard a fight — or harder — to raise the money to build the facility without government grants. 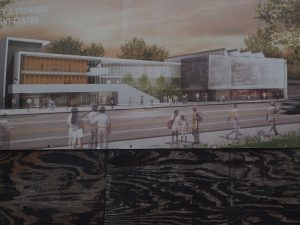 An artist’s rendering of the proposed center is posted on the center site. (Photo by Kevin Beese/Chronicle Media)

Brooks said he wants to build the facility without government assistance, if possible, to avoid the regulations that come with grant money and the expectations of politicians who help funnel the money to a project.

“I’d rather just try to keep asking affluent people,” Brooks said of his hesitation to seek government money for the project.

With more than $5 million pledged to the community center project so far, Brooks has a good start, but knows there are miles to go to make the center a reality. He wants to have the facility built and open by Summer 2022.

He said with enough funding he would love to break ground for the facility by the end of this year or early next year.

The 90,000-square-foot community center is projected to have everything from a gym to an auditorium, according to Negin Moayer of BNMO Design, the project architect. The facility is also expected to include street-level retail space, a charter school program and conference rooms.

“Project H.O.O.D. is looking to keep kids busy. That is part of the purpose of the community center,” Moayer said.

Moayer said she saw Brooks on the roof of that motel and approached him about being the designer for the project.

“It’s an exciting proposal,” the architect said of the pending project. “There are so many aspects to it.”

She said a community rooftop garden and other green steps are proposed as part of the center.

The stress to make a project like he is undertaking happen, while running a church and ministering to a community besieged with gun violence, is exhausting, Brooks admitted.

“I want to quit every day,” he said. “There is not a day that goes by that I don’t wonder if I want to be doing this, that I think about stopping. I pout for five minutes every morning and then I say, “I’ve got to do this.’” 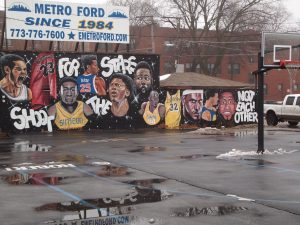 A mural sends a message near the basketball court where Project H.O.O.D. founder Corey Brooks wants to build a community center. (Photo by Kevin Beese/Chronicle Media)

The pastor admitted that he has questioned himself and God’s direction during the journey to make the community center a reality,

“I’ve said, ‘God, not this.’ This is not what I imagined when I started out to help people in this area, but God’s work saves people and we are going to provide families with resources they need,” Brooks said.

Brooks said he does not expect the community center to be built on the backs of his New Beginnings parishioners.

“They give a lot of what they have to the church already,” he said. “They give over and above as partners of the church and I appreciate that.”

The pastor said that the proposed community center would be a difference maker In the Woodlawn community.

“The neighborhood is the reason we are doing all this work,” Brooks said. “This will be a place that people come to for help and leave content. Not all people are going to be able to be helped, but we are going to provide programs to do whatever we can. We want to give more families a voice. We want to celebrate this community.”

Brooks said the magnitude of the project and its impact on the city’s’ South Side remain a driving force for him.

“We have the chance to affect thousands of people,” the pastor said. “We have the opportunity to alter the lives of so many people.”

He said residents continue to get behind the project and that momentum can only help the project move forward.

“The community is with us. When you see all the work they do, how they have gotten sober, gotten their lives clean, it touches your heart,” Brooks said. “That helps us go on.”

For information about the work Project H.O.O.D does, go to www.projecthood.org.