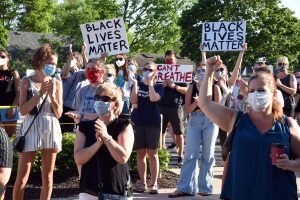 Signs were put down briefly on cement or asphalt for those choosing to kneel and to pray.

A large audience turnout gathered outdoors in mid-90 degree sunny weather for “A Call to Peaceful Prayer and Action for Racial Justice” in Park Ridge on Tuesday.

“To be perfectly honest, I kind of wish I were somewhere else, but the times call for people of faith to come together,” said Rev. David Aslesen, who was an event speaker on behalf of First United Methodist Church of Park Ridge. 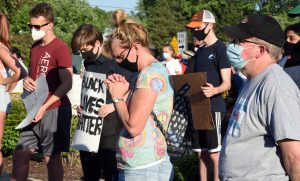 The evening was the first planned and promoted Park Ridge event in response to the death of George Floyd last month and others killed by police recently in the United States.

Floyd apparently died of asphyxiation when Minneapolis Police Officer Derek Chauvin placed his knee on Floyd’s neck to restrain him during an arrest. Chauvin was charged with third-degree murder and manslaughter.

Park Ridge’s event was peaceful and lasted one hour as the sun was setting.

People from outside of Park Ridge attended, including from DuPage County.

“To protest something is a means of saying this behavior is not appropriate and not acceptable, and riot is taking it to another level where you’re doing destruction of property,” said the Rev. Carol Hill of Park Ridge, senior pastor of Park Ridge Community Church.

“Both are arising from a point of pain and anger and hurt, one is really a means to make some positive change and the other (riot) can end up causing more harm than good,” Hill said.

“People should be able to gather peacefully and have dialogue and discussion,” Kaminski said before the program began. 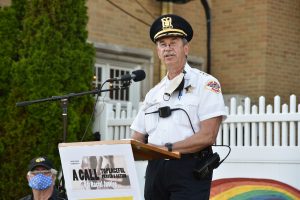 “It’s the foundation of our country.”

From the podium, Kaminski told the audience, “To the family and the friends of Mr. Floyd, our hearts go out to you and you remain in our thoughts and prayers.”

Nan Parson of Park Ridge, a speaker for Action Ridge, told the crowd about Park Ridge, “We are a beloved community and we especially want to send this message out to the black and brown people who are suffering so greatly.”

Hill’s speech also encouraged the audience to clap and to cheer.

“We are working together to dismantle the system of racism,” Hill said.

As Park Ridge Mayor Marty Maloney stepped to the podium platform, audience members were invited to take a knee to show commitment to positive change. 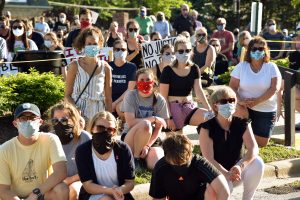 With COVID-19 as a challenge, “As much as we all want to get back to what we thought was normal, maybe that’s not good enough,” Maloney said.

“Maybe normal means to change and seeing everybody here tonight, I’m optimistic and positive that it will.”