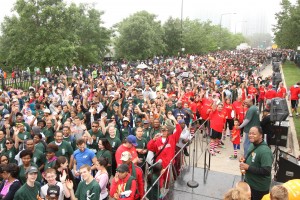 But all those roads lead to the June 20 Hunger Walk along Chicago’s lakefront. The 5K walk (3.1 miles) steps off at Soldier Field, moves along the lakefront to 31st Street and then back to Soldier Field.

The Hunger Walk, begun in 1986, is the largest one-day, anti-hunger event in Cook County. The walk benefits the 650 food pantries, shelters and soup kitchens that belong to the Greater Chicago Food Depository’s network.

“The Hunger Walk started as a gathering of a few hundred people in 1986 and has grown tremendously in 30 years,” said Kate Maehr, the Depository’s executive director and CEO. “It’s more than a fundraiser — it’s a symbol of our entire community’s belief that no one should go hungry.”

The nonprofit depository has been helping to feed Cook County’s hungry since 1979. Each year, 812,000 Cook County residents — one person in six — receives food through the Depository’s network.

Last year, the depository distributed 67 million pounds of food. That’s equal to 154,000 meals a day. And the need grows. Food pantries in Cook County are serving 70 percent more people than they did five years ago.

Because food pantries keep whatever funds they raise during the Hunger Walk, signing up as many walkers as possible is job one.

One of the food pantries that participates in the Walk each year is the Oak Park-River Forest Food Pantry, which serves 10 suburbs and some Chicago neighborhoods. Last year, the pantry provided food to more than 16,000 families composed of almost 46,000 individuals.

Like all the members of the Depository’s network, the Oak Park-River Forest Food Pantry receives $12 in its Depository account for each member of the team it fields for the Walk.

The Oak Park-River Forest Food Pantry hopes to raise $15,000 at the Hunger Walk.

And a dollar goes a long way at the Greater Chicago Food Depository.

With the Depository’s wholesale buying power, pantries can double or triple the amount of food it buys with each dollar. A typical food allotment for a family would cost $126.83 at a grocery store. But a food pantry can buy that food from the Depository at only $12.89. So, all the pantries in the network “try to get as many walkers as possible and encourage them to fundraise,” said Michele Zurakowski, executive director of the Oak Park-River Forest food Pantry. “Each pantry also creates a website for the Depository and emails friends and asks for money.”

Volunteers are needed to join an existing team for the Hunger Walk, or to start a team of their own. Donations also are gratefully sought. Information about Hunger Walk teams and how to join or donate is available from the Greater Chicago Food Depository, (773) 247-3663, or visit its website at www.chicagosfoodbank.org. The Depository is at 4100 W. Ann Lurie Place, Chicago.

Registration on the day of the Hunger Walk (June 20) starts at 7 a.m. at Soldier Field, 1410 Museum Campus Dr. The Hunger Walk steps off at 8:30 a.m. Participants will receive a snack and a Hunger Walk T-shirt by way of thanks.

“The Hunger Walk is a cause for hope,” the Depository’s Maehr said. “It’s a reminder that if we work together  we can end hunger in our community.”