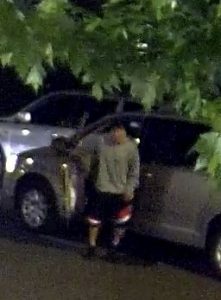 Chicago police are looking for this individual in connection with grabbing a female inappropriately near DePaul University. (Chicago Police Department photos)

Police are warning DePaul University students and staff, and residents of the surrounding neighborhood to be on alert after a female in the area was grabbed inappropriately.

The female was walking home at 1:45 a.m. May 24 on Sheffield Avenue just north of Fullerton when a man approached her from behind and touched her inappropriately. The offender then fled northbound on foot.

Police said the offender is possibly of Asian decent, in his mid 20s, 5’10”, with a smaller build and black hair. He was wearing a gray sweatshirt and black shorts.

Anyone with information the incident or the offender should call the Chicago Police Department’s Area North Bureau of Detectives at 312-744-8261. Anonymous tips can be submitted at TIPSOFT.COM.