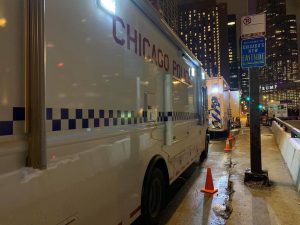 A citizens’ panel is investigating a police-related shooting in which an individual was killed Sunday (Feb. 9) in Chicago’s Lakeview neighborhood.

Chicago police said that at 5:15 a.m. Sunday, officers from the 19th Police District responded to a call of a disturbance on the 3600 block of North Ashland Avenue.

Investigators said that while officers were in the area, an individual shot another person and fled on foot. Officers were able to locate the shooting suspect where an armed confrontation with police ensued, according to Chicago police.

The individual shot at officers who returned fire, police said. The individual believed to have shot at police was pronounced dead at the scene and a weapon was recovered, Chicago police said in a statement.

The original victim, who was struck in the neck and cheek, was transported to an area hospital and was in surgery Sunday, police said.

An officer was transported to an area hospital for minor injuries related to the foot chase.

The Civilian Office of Police Accountability is investigating specifics of the incident, including the use of force.

Chicago police said the officer or officers involved will be placed on routine administrative duties for 30 days while the case is being investigated.