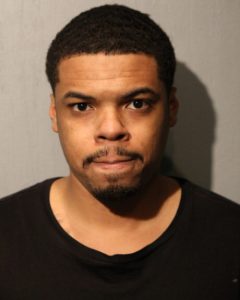 A South Holland man is facing charges in connection with the discharging of a gun in a Downtown Chicago hotel.

Reginald Tolbert, 24, a resident of the 16700 block of Maple in South Holland, has been charged with four counts of reckless discharge of a firearm and one count each of aggravated assault and harassment.

Tolbert was identified as the offender who fired a gun Feb. 16 at the Hyatt Regency Hotel on the 100 block of East Wacker Drive, injuring four people, according to police.

Tolbert was taken into custody at 2:30 p.m. Thursday on the 14500 block of South Eggleston in Riverdale.

Police said that while fleeing the hotel Feb. 16, Tolbert pointed his weapon at security personnel. He also allegedly made several telephone threats to Chicago Area Central detectives investigating the incident.