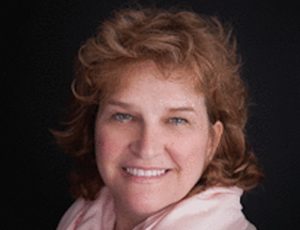 “I was made aware late yesterday of social media posts by Sharon Brannigan, a member of our Cook County Commission on Women’s Issues. If these posts accurately reflect her views on diversity and inclusion, I believe she should step down from the Commission,” Preckwinkle wrote.

Brannigan, of Palos Heights, was elected to the township trustee’s office in 2013. She ran unsuccessfully as a Republican against 3rd Dist. Rep. Dan Lipinski in 2014.

Brannigan posted in January, “What’s Palos doing? Why are all our schools filling with Middle East students without proper documentation? What’s Dan Lipinski doing about it?” 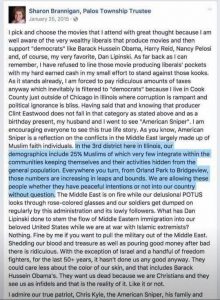 On her Palos Township Trustee page in 2015, she praised the film “American Sniper” and complained about how “Muslim faith individuals” were “increasing by leaps and bounds” in the area.

“Very few [Muslim residents] integrate within the communities keeping themselves and their activities hidden from the general public,” she wrote.

Brannigan said she had been posting the same views for years and had the right to do so under the First Amendment. She has since closed her Facebook page after receiving threats, she said.

But protesters said she should not have been posting those opinions using her township official account.

“To have that rhetoric in a township where 30 percent of residents are Muslims and more importantly, not just Muslims, they are Americans? That is wrong,” said Rush Darwish from the American Middle Eastern Voters Alliance.

Palos Township includes Bridgeview, Hickory Hills, Orland Park, Palos Heights, Palos Hills, Palos Park, Willow Springs, and Worth. The township encompasses the largest Arab community in Illinois, according to demographic data. Bridgeview is ranked as the 15th highest Arab population in the U.S., with 1,600 residents of Arab descent, or 6.4 percent of the population.

“I was born and raised here,” said Ronya Abulaila of Arab American Family Services (AAFS). “I’ve seen this community grow from three families to 3,000 families. I don’t want my child to grow up knowing his culture has some bearing on whether he’s going to be represented in our community or not,” she said. 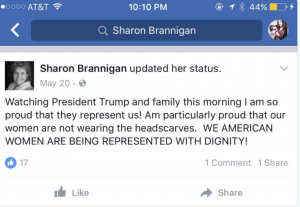 Democrat Marie Newman, who has announced she is challenging Lipinski in the primary, chastised the other trustees for remaining silent. “As a person who grew up in Palos, I did not grow in a community that talked like [Brannigan],” Newman said.

Cathy Bronson, a professor of Arabic and Islam at Notre Dame University identified herself as a Southwest-sider of Irish extraction.

“I have evolved from my Mount Greenwood background,” she said. “I hail from an Irish-Catholic background, and Sharon is a relic of the past. She is a dinosaur, as are her ilk. She is not going to represent us.”

Bronson said her daughter was one of four girls wearing hijab headscarves who were verbally attacked by an older man in a Hickory Hills restaurant in June. A video of the man bullying and insulting the girls went viral on the Internet.

“[Brannigan] has breached the public trust by preying on people of low intellect who are saying ‘I’m afraid of people who have something on their heads,’” Bronson said.

Immigration attorney Vivian Khalaf said she condemned the actions of Brannigan and called for her “immediate resignation.”

“The absence of similar condemnation on the part of the board is equally troubling, as silence is complicity, and we condemn it as well,” Khalaf said. 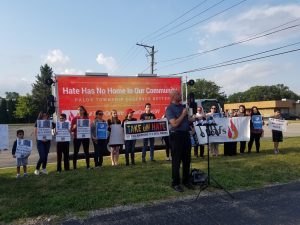 Brannigan read from a statement at the meeting that posts were “for the sole purpose of bringing awareness to the property taxpayers of our township. I have no power to change, [the taxes] except by the written word,” she said.

Her statements on social media page fell under the First Amendment “as does the freedom of religion,” Brannigan added. Brannigan said raising taxes might lead to the schools and township not being able to provide services to non-citizens, but stressed the township currently did not deny services based on immigration status. “No one is turned away,” she said.

“To clarify and underscore for those of you who don’t get it, the point of my statements criticizes the federal government’s poor immigration controls, including an almost negligible visa tracking system. Again, that criticism falls under the 1st Amendment,” she said. “I am fully supportive of inviting all hard-working immigrants who contribute their fair share to our society and township. Anything less would be un-American.”

“Such viewpoints certainly do not reflect our values nor, in my opinion, the kind of representation we want on the Commission,” Preckwinkle wrote.