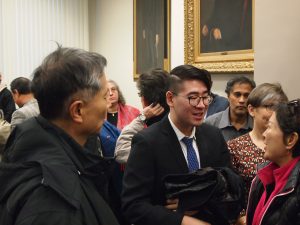 Residents of Chicago’s Chinatown neighborhood leave a city public hearing on a proposed special service area to improve trash pickup and other things to help draw tourists to the area. (Kevin Beese/Chronicle Media)

Property owners in Chicago’s Chinatown neighborhood could soon be paying more in taxes for snow- and ice-removal services, trash pickup, and advertising to bring tourists into the area.

Residents, business merchants and other property owners in the neighborhood would be paying 0.8 percent of their land’s equalized assessed value into a special services fund for proposed maintenance, signage to tourist locations and other Chinatown improvements.

Creation of a special services area, which has residents of a designated region pay for improvements through a specific tax levy, is viewed as a way to ensure Chinatown continues to thrive.

The special assessment would cost the owner of the average Chinatown residence about $500 per year.

“It is less than 1 percent of property owners’ EAV. It is less than $1.40 per day,” Solis said. “It would provide needed services and the SSA would last for 10 years.”

“This would greatly enhance the quality of life for our senior residents,” Wong said. “They wouldn’t have to worry about slippery sidewalks … . Dirty sidewalks would be administered too so they would not be an issue.”

Helen Lee, a Chinatown property owner, said as the neighborhood grows the services the SSA would provide are in more demand.

“Chinatown is one of the most densely populated areas of the city,” Lee said. “It has a booming real estate market … . Properties are in demand. We can’t afford the perception that the area is becoming a slum.”

David Wu, a resident of Chinatown for more than 20 years, said there are no signs directing tourists to some of the area’s most interesting sites, including Ping Tom Memorial Park.

However, many residents say they do not have a clear understanding of just what they would be receiving for the added expense.

“They have used broad language. There is nothing concrete in their proposal,” Robert Hoy of the United Chinatown Organization said. “We need accountability.”

Hoy said there are other ways to generate money for sprucing up the area besides taxing residents and business owners. He suggested raising the parking fee in the main Chinatown parking lot from $2 to $3.

He questioned the special service area’s plan to put more foliage in Chinatown. Hoy said homeless individuals use the foliage already there to hide their possessions.

Lauren Cho, another opponent, said residents of Chinatown and other Chicago neighborhoods are already paying the second-highest sales tax rate in the country. To add the special service area tax just compounds the misery, he said.

“We pay too much in taxes … . Taxes are burdening property owners and business owners,” Cho said.

Leslie Moy, another member of United Chinatown, said the Chinatown Chamber did a poor job in rolling out the special service area proposal.

“They could have gathered support but they didn’t,” Moy said. “They are trying to impose a tax that 80 percent of the people don’t want.”

She said the Chinatown Chamber is taking a “Draconian step” in taxing residents for routine maintenance.

The proposed SSA still needs to get City Council approval in order to go into effect.