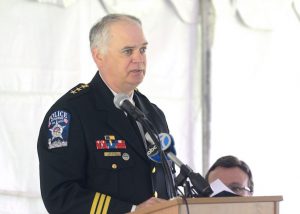 Cook County residents and some state politicians may be ready for the legalization of marijuana, but police are not, according to one near west suburban police chief.

Police are years away from having any kind of mobile device to test motorists for drugged driving, according to Riverside Police Chief Tom Weitzel. He said while mobile Breathalyzers can be used to detect drunken drivers, no equipment can be taken in the field and used to detect drivers under the influence of marijuana or opioids.

Weitzel, chairman of the Illinois Impaired Driving Task Force, testified in Springfield last week before the National Transportation Safety Board about drugged driving. He said more money has to be allocated for research and product development.

“We are in desperate need of funding,” Weitzel said. “We do not have roadside test equipment for drugged driving. We need to put federal funding into having prototypes tested.”

He said a mobile unit developed by a German company that took a swab from an individual’s cheek and determine the amount of THC in a person’s system has been a “miserable failure.”

“We need to develop equipment here in the United States like we did with the Breathalyzer 40 or 50 years ago,” Weitzel said.

The Riverside chief said because of the lack of field equipment to test for motorists under the influence of drugs, any arrest for a drugged driver has to include observations from a drug recognition officer.

“We have to run testing. It’s complicated,” Weitzel said. “DRE officers have to do horizontal gaze testing. Drugged drivers will have an involuntary jerking of the eyes. Testifying in court on a drugged driver case is not just a single officer. Drugged driving arrests are much more complicated.”

He said that a drugged driving arrest can take an officer off the street for four to six hours.

State politicians, especially on the Democratic side of the aisle, have been eying the legalization of marijuana as a source of revenue for the state and a way to reduce the black market for the drug.

“The reason there is huge support from the General Assembly is because of the public revenue,” said Weitzel, who has attended state hearings about the proposed legalization of marijuana for recreational use. “They have made $700 million in Colorado since 2010. When our lawmakers heard that, their eyes popped out of their head and they were like, ‘Where do we get on that train?’”

Weitzel said federal help is also needed in training more police staff to be drug recognition officers. He said it costs between $5,000 and $7,000 and takes a year to 18 months to train an officer in the program.

“Plus, you have to select the right officers. There is math and pharmacology involved … It takes commitment from the officer,” the Riverside chief said.

Weitzel said he is fortunate that his small department has two DRE officers on staff when there are just 122 drug recognition officers in the whole state.

Before medical marijuana was legalized in 2015, Weitzel said, the Riverside department averaged one or two arrests for drugged driving a year. Last year, 20 percent of the department’s 113 driving under the influence arrests involved drugged drivers, the chief said.

“That’s a substantial jump,” Weitzel said. “For a small agency, 20 percent of arrests for DUI being drugged drivers is some increase; and the state is not addressing the issue.”

The Riverside chief said the lack of knowledge about drugged driving among motorists is alarming, especially among 18- to 21-year-old drivers.

“In several cases, officers have walked up to the car and the driver is still smoking cannabis because they think if they have 10 grams and under that it is basically a parking ticket,” Weitzel said. “They still think they can drive and that they can’t be arrested because they have under 10 grams on them. It is not the same as walking down the street with a joint. They don’t acquaint being drugged and driving. They do not even try to put it out when the officers come up. The attitude today is so lax.”

Weitzel said with the recreational use of marijuana likely to be passed in Illinois soon, the issue of drugged driving is not going to go away.

“Law enforcement needs to get on the ball,” he said. “We need a device to detect drugged driving right on the road, like a portable Breathalyzer.”

He estimated that once a usable roadside testing device was developed it would take two or three years for select agencies to test the device, national standards to be set and scientific boards to show that information from the devices could be entered into evidence.

Weitzel said while it would be great if such a device could detect drivers under the influence of opioids as well, he would happy just getting the marijuana tester on the street.

“You need to start somewhere. Marijuana is more accepted as a drug,” Weitzel said. “We see more abuse with that.”