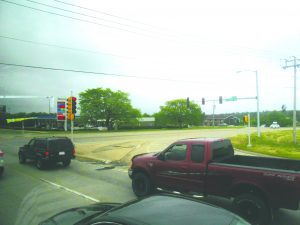 The study focused on State Street, a major thoroughfare that, according to earlier research by Michael Smith, saw 22 percent of collisions — the highest percentage of any street in Rockford. (Photo by Igor Studenkov/for Chronicle Media)

The two reports presented at this year’s Transport Chicago conference draw a similar conclusion. In order to prevent accidents, it’s not enough to try to try to change driver behaviors — the very street design needs to change to make them as safe as possible for drivers, bicyclists and pedestrians alike.

And it wouldn’t necessarily take a lot of money to do it.

Transport Chicago is an annual conference that is designed to bring transportation agencies, urban planning researchers and urban planning firms together to share research and ideas. This year’s conference was held on June 14.

During the Pedestrian Safety/Vision Zero panel, the panelists looked at traffic safety in Chicago and Rockford, the fifth-largest city in Illinois and the largest city outside Chicago six-county metropolitan area.

Michael Smith, an urban planner who grew up in Rockford and recently earned his master’s degree at the University of Illinois at Chicago, argued that many of the accidents could be prevented with more pedestrian-friendly street designs. And Siddharth Shah, an urban planner with Sam Schwartz Engineering consulting firm, talked about how the City of Chicago’s efforts to improve traffic safety would include both design improvements and community engagement, as well as looking at how traffic accidents intersect with other community issues.

Smith said that he originally did the study because of what he saw as a disconnect between the City of Rockford’s goals and the reality on the ground. Even though the city repeatedly emphasized the importance of traffic safety, he said, accidents involving pedestrians keep happening.

In the summer of 2018, Smith started looking at Illinois Department of Transportation traffic safety statistics and found that most of the accidents in the last 10 years occurred on Rockford’s major arterial streets, and most of them occurred in the daytime, and that, in most of those cases, rain, snow, fog, wind and other inclement weather weren’t a factor. He also found that, while he expected most of the collisions involving pedestrians to happen in Rockford’s more pedestrian-friendly downtown, that area only accounted for 15 percent of collisions. The areas with the highest percentage of collisions, 33 percent, happened in commercial areas.

As Smith explained in his presentation, according to IDOT data, between 2007-16, Rockford saw 544 collisions involving pedestrians. 28 of them were fatal.

For his master’s thesis, Smith decided to take a deeper dive into the issue. He focused his study on State Street, a major thoroughfare that, according to his earlier research, saw 22 percent of collisions — the highest percentage of any street in Rockford. He set up cameras at three locations for two weeks.

During the course of the study, Smith discovered several factors that made it more difficult for pedestrians to cross State Street safer.

At Site 1, pedestrians that used walkers, wheelchairs and other mobility devices tended to avoid crosswalks because they didn’t have the inclines that let them get off the sidewalk smoothly and safely, preferring instead to use curb cuts at the parking lot in the middle of the site.

At Site 3, the lack of sidewalks along some portions of the segment led pedestrians and cyclists to simply use the road. At the crosswalks, the wait times are so long that some pedestrians wind up crossing when the light is red. When the white walk light does come on, pedestrians don’t have enough time to cross State Street. To illustrate his point, Smith showed a clip of a woman crossing the intersection.

“If there’s one vehicle, the light will last 10 seconds, but when the light turns red, she’s half-way through [the middle] and she kind of has to sprint for it,” Smith commented.

He also noted that the same buttons are hard to reach for people in wheelchairs.

Based on the results, Smith offered several recommendations. Most notably, he recommended adjusting signal times, clearly marking crosswalks, making intersections accessible, adding curb bump-outs at the State/Jefferson intersection, adding benches and, if possible, shelters at the bus stops, and filling in sidewalks where none exist. And he suggested doing further research on the issue.

Smith said that he presented his findings to Rockford mayor and the city council, and that they were “intrigued by it.”

While Smith’s efforts were something he did on his own, Sam Schwartz did its study on the behest of the Chicago Department of Transportation.

The firm is working on developing a plan that would follow Vision Zero — a global strategy that is designed to make the streets safer for everyone while addressing issues of inequity.

Shah said that, when looking at the number of accidents involving pedestrians in Chicago, the Loop made sense as a hotspot, given its large number of residents, workers and visitors and the large levels of traffic. But the group also discovered that there are many neighborhoods where the amount of accidents that resulted in either deaths or serious injuries was higher than the city average — and most of those were either majority-black or had a significant black population. That included majority-black neighborhoods that are either entirely or largely lower income — Austin, West Garfield Park, North Lawndale, Auburn Gresham and Englewood, as well as gentrifying but still majority-black East Garfield Park, gentrified Near West Side, the increasingly Hispanic West Englewood; and the traditionally middle class black neighborhoods whose average income has been declining in the last two decades — Avalon Park, Calumet Heights and Chatham. While there are still a number of lower-income black neighborhoods that don’t fit the pattern, those neighborhoods are home to a substantial portion of Chicago’s black population.

Shah went on to explain that, under Vision Zero, “a traffic crash is not an accident, but predictable and preventable occurrence” and “no traffic death is acceptable when tools exist to prevent it.”

Vision Zero, he said, takes a multi-prong approach to reducing accidents, including “choosing effective street design that prioritize safety, identifying and preventing the most dangerous roadway behaviors, working with the community leaders and all Chicagoans to educate [residents] on safe roadway behaviors.”

Like Smith, Sam Schwartz called for street design and signal improvements. But Shah also emphasized that it, in itself, wasn’t enough. On the West Side in particular, the earlier plan was criticized because residents felt that it focused too much on fines and didn’t get enough community input. Shah said that the revised plan takes a different tack.

“When you looked at the West Side are, the plan is more holistic,” he said. “Because in that community, traffic safety is just one of many areas that [residents] worry about and care about So when you ask those people — what is safety — it’s much broader.”