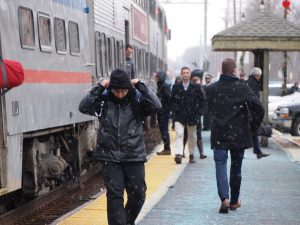 Commuters depart from a westbound Metra train in Glen Ellyn. The Regional Transportation Authority, which oversees Metra, says the state must provide more money for mass transit in the area. (Kevin Beese/Chronicle Media)

RTA officials are concerned that Illinois may be left at the station when the federal money train comes rolling through doling out funds for transportation infrastructure improvements.

Kirk Dillard, chairman of the Regional Transportation Authority’s Board of Directors, said there is much more dependency and requirement for involvement at the state level under the administration of President Donald Trump.

“Our state is not keeping up with other states in our area, let alone nationally,” Dillard said at last week’s RTA Board meeting. “The state needs to be ready to provide matching funds when the Trump administration offers the money for transportation infrastructure. Indianapolis and Phoenix are ready to go. Indiana just increased its motor fuel tax to be ready to go.”

Dillard noted that Indiana is putting nearly $1 billion into improvements on the South Shore Line “and their ridership is a pittance of what Metra ridership is.”

“The state clearly needs to get its act together to be nimble to get our citizens their fair share of dollars when they are made available,” the RTA Board chairman said.

Leanne Redden, executive director of the RTA, said that the state has become more regular with its payments to the transit agency since a state budget was put in place. She said that the RTA is still the second biggest entity owed money by the state, trailing just the state employee pension funds, as it is owed $447 million from the state.

“We are seeing a little more money coming in from the state,” Reyna-Hickey said. “Instead of getting $30 million, we might get $40 million one month.”

She said the state is 17 months behind on its payments to the transit agency. The RTA has had to draw upon its short-term borrowing ability of $400 million because of the payment backlog, agency officials said.

“Why don’t we suggest to the state that they use the 2 percent (surcharge assessed by the state for collecting the RTA sales tax) to pay down their debt to us until they don’t owe us anymore,” said board director J.D. Ross.

John Frega, board director, said he is concerned about the interest the transit agency is having to pay for the short-term borrowing it needs to do because of the delay in state payments.

“I’ve always very concerned about interest,” Frega said. “That’s money lost. We need to raise Cain with the state about that.”

Outspoken Chicago resident George Blakemore said that the RTA’s $3 billion budget is being balanced on the backs of poor people, through fare increases on service providers including the Chicago Transit Authority and Metra. 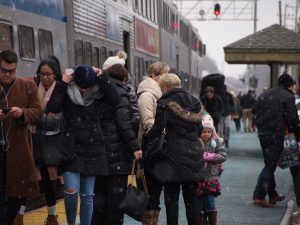 Metra users exit a westbound train in Glen Ellyn. A director on the RTA Board, which oversees Metra and other transit units in the region, said the state should use the 2 percent surcharge it is charging for collecting RTA sales tax revenue to pay off the 17-month backlog the state has in paying the transit agency. (Kevin Beese/Chronicle Media)

“I am not elated on this balanced budget,” Blakemore said. “You have spent this money unwisely. There is still a lot of waste, fraud and abuse that’s going on here with transportation.”

He said as a good steward of taxpayer funds, the RTA should have cut out a lot of high-level management in its latest budget.

“You have a balanced budget, but what is the harm?” Blakemore asked. “The cloud is not over. The storm is still going to come. Perhaps you should increase service, and you would increase ridership.”

He said that combined with people leaving Illinois in numbers “that are staggering” sends a message that RTA needs to share the bigger-picture view with state leaders. He said the RTA could advance the dialogue about what is happening in the state and how to turn things around.

“I think collectively we need to give some thought at how to put the dots together and how to engage in a broader conversation,” Anderson said.

Dillard said showing how the RTA plays a vital role in moving one-sixth of the state’s population to and from work every day is a very important message to share.

“It is very much part of the story that we must tell to the public, to Congress and to the state legislators,” Dillard said.

He noted that every year the RTA grants $100 million in free and reduced rides via a state mandate, while the state continues to reduce its reimbursement to the transit agency for the program.

“If they are going to mandate those, then they need to come up with the cost because that gets passed to, for the lack of a better work, the regular riders.”

—- RTA: State of Illinois needs to step up funding efforts —