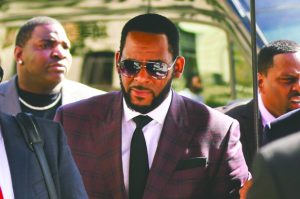 The Chicago-based artist, whose full name is Robert Sylvester Kelly, faces a 13-count indictment in Illinois, alleging he produced and received child pornography, and enticed five minors to engage in criminal sexual activity, making multiple videos of some of the victims.

The indictment also charges Kelly with conspiring to intimidate victims and conceal evidence in an effort to obstruct law enforcement, including an investigation in the 2000s that resulted in his trial in 2008 in Cook County on state child pornography charges.

Kelly, 52, of Chicago, was arrested July 11. He is scheduled to appear for an arraignment and detention hearing Juy 16 before U.S. District Judge Harry D. Leinenweber in Chicago. Results of that hearing were not available as of press time.

McDavid made his initial court appearance July 12 before U.S. Magistrate Judge Young B. Kim in Chicago while Brown is scheduled to make an initial appearance before Kim on July 19.

“This indictment demonstrates our office’s commitment to holding individuals such as Kelly accountable for criminal sexual abuse of minors, protecting the victims of such crimes, and punishing those who obstruct law enforcement investigations,” said U.S. Attorney John Lausch. “I thank the courageous individuals who provided law enforcement with important information related to these allegations; and I encourage others with helpful information to do the same. Together with our law enforcement partners and with the help of victims and other witnesses, we will continue to vigorously investigate and prosecute individuals who sexually exploit children.”

“We will continue to work in partnership with fellow law enforcement agencies and prosecutors to bring those engaged in child exploitation to justice,” Gibbons said.

A separate federal indictment was unsealed July 12 in the Eastern District of New York charging Kelly with racketeering for allegedly operating a criminal enterprise that promoted Kelly’s music and recruited women and girls to engage in illegal sexual activity. Kelly appeared Friday afternoon for a removal hearing on the New York charges today before U.S. Magistrate Judge Sheila Finnegan in Chicago.

Kelly is an award-winning recording artist and record producer who has operated various music businesses in Chicago. According to the indictment in the Northern District of Illinois, Kelly met the five victims in the late 1990s. Kelly engaged in sex acts with the victims while they were all under the age of 18, and he created numerous explicit videos with four of them, the indictment states. The charges allege that Kelly and McDavid in 2001 began paying an acquaintance hundreds of thousands of dollars to collect the videos for the purpose of concealing and covering up their existence. When the acquaintance later planned to hold a news conference to publicly announce that he recovered the videos, Kelly, McDavid and others paid him $170,000 in exchange for agreeing to cancel the event, the indictment states.

Kelly and McDavid also agreed to pay one of the minors and another individual for their efforts to return the videos, but only after they took polygraph examinations to confirm they returned all copies in their possession, the charges allege.

The indictment seeks forfeiture of a personal money judgment of approximately $1.5 million.

Any people who believe they are victims of sexual exploitation by Kelly are encouraged to contact HSI’s confidential tip line by calling 1-866-DHS-2-ICE (1-866-347-2423) or by logging on to https://www.ice.gov/webform/hsi-tip-form. The service is available 24 hours a day, seven days a week.