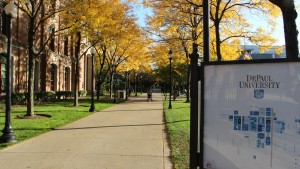 DePaul University is one of the six Chicago-area universities, which have committed to providing scholarships to Chicago Star Scholars. (Photo by Nick Hanosn/for Chronicle Media)

Six additional Chicago-area universities have committed to providing scholarships to Chicago Star Scholars, following their graduation from City Colleges of Chicago. The expansion of opportunities for Chicago students comes on the heels of the release of CCC’s highest graduation rate on record.

“Having a college education should always be determined by a student’s willingness to work, not their ability to pay, so with the support of our partners at Chicago’s top universities, we are giving our students a clear pathway from high school to four-year degree,” said Mayor Rahm Emanuel. “The Chicago Star Partnership will help ensure that our hard-working graduates remain in Chicago for college, and continue to contribute their talents and skills to our growing economy and communities.”

In its inaugural year, the Chicago Star Scholarship has enabled nearly 1,000 CPS graduates to pursue their associate’s degree and other credentials from City Colleges of Chicago (CCC) free-of-charge. With an expanded partnership between CCC and seven Chicago-area colleges, hard-working CPS graduates will now have an opportunity to build on their time at CCC and pursue a four-year degree at one of Chicago’s top universities at lower cost.

“In order to secure a family sustaining career in today’s economy, a post-secondary credential is needed, and in many cases, that credential is a bachelor’s degree,” said Chancellor Cheryl Hyman of City Colleges of Chicago. “The Chicago Star Partnership offers our high-achieving high school students a way to earn an associate’s and bachelor’s degree, saving tens of thousands of dollars along the way.”

This past August, the University of Illinois at Chicago launched the UIC Star Scholar Award, and became the first four-year institution to provide an extended opportunity for hard-working students to pursue a four-year degree at a significantly lower cost. The UIC Star award will offer at least 250 Star Scholars who transfer from CCC to UIC with an Associate Degree and a 3.0 GPA an opportunity to earn a scholarship of $5,000 over two years.

In addition to scholarships for Star graduates, the Chicago Star Partnership colleges are also exploring other benefits, including guaranteed admissions programs and access to four-year college advisors while a Chicago Star Scholar is still a student at City Colleges.

“As a former college president myself, I am proud to see Chicago’s great four-year universities collaborating to ensure outstanding Chicago public high school students can pursue a college degree regardless of their financial circumstances,” said City Colleges Board Chair Charles Middleton, who worked to bring his former colleagues into the partnership. “Through the mayor’s vision, our high schools, community colleges, and four year universities are creating a seamless pipeline for Chicagoans from the classroom to careers.”

During an address to the City Club of Chicago on Oct. 13, Chancellor Hyman announced that City Colleges’ graduation rate has reached 17 percent, more than double the rate since the launch of its Reinvention effort and the highest on record. In FY2015, CCC delivered nearly 5,000 degrees — the highest in City Colleges’ history.

Since the Reinvention began in 2010, CCC has made significant investments in all seven colleges, to ensure that all degrees and certificates are made relevant to the demands of the workplace and four-year institutions, and to deliver enhanced academic supports for students to ensure that they have the tools and support they need to be successful in their pathway of choice. Students who complete the first two years at one of the seven City Colleges and then transfer to a four-year institution can save up to $40,000 on the cost of a bachelor’s degree.

For more information about the Chicago Star Scholarship at City Colleges of Chicago, go to: www.ccc.edu/starscholarship.