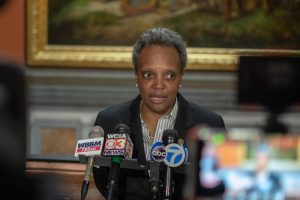 Chicago Mayor Lori Lightfoot offered tentative support for a plan to increase the number of federal agents in Chicago this week, although she said local officials would be on guard against violations of civil liberties. She is pictured at the Capitol in Springfield in February. (photo by Jerry Nowicki/Capitol News Illinois File)

SPRINGFIELD — State leaders on Wednesday, July 22, gave tentative support to a Trump administration plan to send more than 200 federal agents to Chicago, although officials said they would also be on guard for any violations of civil liberties.

In a news conference Wednesday, Trump formally announced that Operation Legend, a federal initiative boosting law enforcement efforts in Kansas City, Missouri, was expanding to other cities including Chicago.

U.S. Attorney General William Barr said upcoming efforts in Chicago would be “a different kind of operation” than the administration’s recent deployment of Homeland Security agents to Portland, Oregon, a week earlier. Oregon’s Attorney General filed a lawsuit July 17 against the Department of Homeland Security and the U.S. Marshals Service after several reports of unidentified federal agents detaining residents in that city.

“The operations we’re talking about are the standard anti-crime fighting activities we have been carrying out around the country for decades,” Barr said of Operation Legend. “These are street agents, they’re investigators who will be working to solve murder and take down violent gangs. They will be working shoulder to shoulder with our state and local colleagues.”

According to Barr, more than 100 agents forming the surge will be from the FBI, the Bureau of Alcohol, Tobacco, Firearms and Explosives, and the Drug Enforcement Administration. These agencies already cooperate with local and state police in Chicago on various taskforces. More than 100 members of the U.S. Marshals Service Great Lakes Task Force and 100 DHS agents already in the city will also be a part of Operation Legend.

Following a city council meeting Wednesday, Chicago Mayor Lori Lightfoot said she appreciates any assistance against gun violence but warned, “if we see any steps out of line, particularly with DHS or Border Patrol, we’re not going to hesitate to take the president to court.”

“Federal agents who are here in Chicago have been here for decades, FBI, DEA and ATF. We routinely work in partnership with them,” Lightfoot, a former federal prosecutor, said. “And importantly [it’s] a difference between what the president and Attorney General Barr did in Portland.”

Lightfoot had written a letter to President Trump on July 20, asking that instead of making “our community less safe” by deploying federal agents, he should use federal resources to help the city. The four-page letter called for gun reforms and funding for several initiatives, including public safety, community outreach and COVID-19 relief.

Agents arriving in Chicago as part of Operation Legend will be under the supervision of U.S. Attorney John Lausch Jr., whom Lightfoot called a friend and former colleague.

“We will use these new resources and every other available federal law enforcement tool to reduce the unacceptable level of violent crime in Chicago,” Lausch said in a news release.

Before the full scope of the mission was revealed, Gov. J.B. Pritzker said the plan was “ridiculous” during a press conference Tuesday.

On Wednesday, the governor briefly addressed the surge following a briefing on COVID-19.

“To convey my longstanding position, I welcome legitimate resources from the federal government to reduce violence and help our residents stay safe,” Pritzker said. “What I will not stand for are efforts to undermine civil rights and civil liberties like what’s happening in Portland … conducted anonymously under the cover of darkness with no transparency.”

Pritzker said he tried to call Acting Secretary of Homeland Security Chad Wolf on Tuesday to talk about the surge but was told Wolf would not answer his calls for 48 hours. Wolf stated in a Fox News interview July 20 that he did not “need invitations by the state, state mayors, or state governors to do our job,” in reference to demands by Oregon officials that DHS agents leave the state, and requests from Illinois and Chicago officials that they don’t come at all.

In an email Tuesday, Illinois Attorney General Kwame Raoul said his office was “committed to using every resource available to my office to prevent actions that would lead to the violation of the constitutional rights of residents of Chicago and Illinois.”

“I have also conferred with Oregon Attorney General Ellen Rosenblum to ensure I understand how her office and the City of Portland developed a response to the deployment of federal agents in Portland,” Raoul said.

The pair said they were “relieved the Trump administration says they plan to work with local officials and authorities in Chicago rather than undermine local law enforcement and endanger our civil rights, as their agents have done in Portland.”

Durbin introduced a bill on the Senate floor Monday that would limit federal agents’ crowd control activities to federal property unless requested by both the mayor and governor.