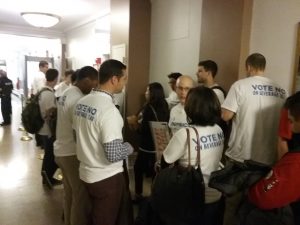 Individuals wait to get into the Cook County Board Room to express their opinion about the county’s sugary beverage tax. Board President Toni Preckwinkle cast the deciding vote last week to approve the 1-cent-per-ounce tax on soda, sports drinks, juices and other sugary beverages. (Photo by Kevin Beese/for Chronicle Media)

While Cook County’s sugary beverage tax was nearing passage by the narrowest of margins, county Commissioner Debra Sims took a moment to call out some of her peers.

Moments after the county’s Finance Committee passed the new tax by a 9-8 vote on Thursday, with County Board President Toni Preckwinkle casting the deciding vote, the formality of repeating that vote as the full County Board was required.

With commissioners on both sides of the issue repeating their Finance Committee votes, Sims took a swipe at commissioners going against the measure. She said those same commissioners will have not a problem being at ribbon-cutting ceremonies for projects the balanced budget generates.

“All of the same people that vote ‘no’ for revenue are going to be out there pounding their chest saying how great Cook County is and how good the programs are, but they won’t take the hard vote,” Sims said. “It’s a shame it’s going to be nine people that are going to carry this budget and the rest of the people will go out and say what good services they provide for Cook County.”

Sims said the nine people putting their necks on the line to balance the budget will not get the recognition they deserve “that they did the right thing” and everyone on the County Board will benefit.

She said communities that get services in the county’s fiscal year 2017 budget should thank the nine who backed the sugary beverage tax that filled a budget shortfall.

In casting the deciding vote, Preckwinkle acknowledged it was a difficult decision and not one she came to lightly.

“Raising revenue is never my first choice,” the board president said. “However, my fundamental responsibility as president is to present a balanced budget that supports our critical services. This measure provides important revenue, not only to avoid damaging cuts to our public health and public safety systems, but also to expand our community-based interventions in both arenas. 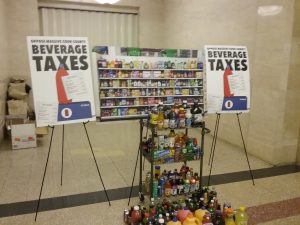 A display by opponents of the Cook County sugary beverage tax show all the drinks that will be included in the tax, which passed last week by the narrowest of margins. (Photo by Kevin Beese/for Chronicle Media)

“It also puts us on a stable financial footing for the next three fiscal years during which we will not have to approve any additional tax increases. Furthermore, this is an option that reflects our commitment to public health by supporting and expanding the services we provide as well as to encourage healthier habits.”

Preckwinkle said the county health system spent more than $200 million over the past year treating diabetes, obesity and other conditions that could be improved by reduced sugar intake.

“We should not overlook the urging of the World Health Organization or the positive impact on consumption in other areas where similar measures have passed,” she said.

Preckwinkle pointed out the tax provides less than half of the money the county needs to balance next year’s budget. The other funding, she said, comes from efforts to drive down the costs of doing business and to increase efficiencies throughout the county.

She said it was tough for commissioners to vote for the sugary beverage tax in the face of organized and well-funded opposition from the American Beverage Association and other entities.

Tobolski noted that even with the sugary beverage tax, there are still 270 layoffs as part of the next county budget.

He said when he joined the board in 2010 he was pleased with the direction of the county, reducing a $3.3 billion budget.

“When I saw the budget this year and the figure is at $4.4 billion, I quickly realized we’ve added a billion dollars to what we spend here on county government,” Tobolski said. “… I just think we’re moving in the wrong direction. I’ve had a thousand phone calls to my office — people in my district — I didn’t get that with the sales tax.

“A thousand people have called me and told me that they have just had it with taxation and Cook County government. I mean we have hit them very hard everywhere they go.”

The McCook resident admitted that his wife now goes to DuPage County to buy her cigarettes. He said he envisions many of his constituents making similar trips now for soda.

“If I’ve got to go to the Jewel in DuPage County to buy my Pepsi Cola or my Coke, whatever it happens to be, I’m just going to buy the rest of my groceries there,” Tobolski said. “These are the types of messages that those thousand people have shared with me.”

“I need to vote my district here,” he said. “I’m elected to represent them first and foremost. They do not want this.”

He said 2018 is right around the corner and commissioners will be knocking on doors with re-election petitions. Tobolski said it will be interesting what those commissioners who supported the beverage tax hear from their constituents.

He said revenue continues to lag behind projections and expects the county to be in the same funding crisis a year from now.

“Don’t BS yourself and think we will not have a deficit again next year,” Tobolski said.