On the eve of spring (which began March 20), the 45th Annual Maple Syrup Festival on March 19 in Northbrook drew an estimated 4,000 people to the River Trail Nature Center (3120 Milwaukee Ave.), a Forest Preserves of Cook County location. 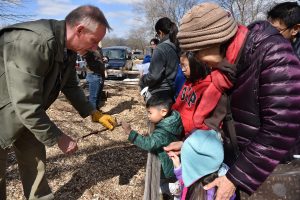 The four-hour event was free and meant to herald the arrival of spring with a midday Sunday of activities, which featured crafts, games, tree tapping and maple syrup history. 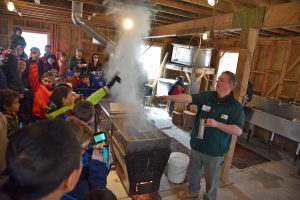 “What’s fascinating about the maple syrup festival is we actually learn how a tree works by learning about maple syrup,” said Michele Mottlowitz of Buffalo Grove, River Trail Nature Center director with the department of conservation and experiential programming.

“I absolutely love this festival, this festival is brilliant, it springs awakening, it’s all about how a tree works and we’re getting a chance to taste one of nature’s pure sugars and pure treats at the same time.” 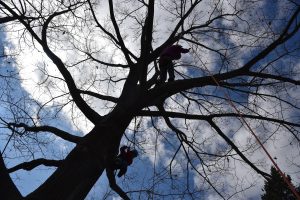 Near the spot to ring the bell is Thalia Koutsougeras, 9, of Glenview up in a tree. (Photo by Karie Angell Luc/for Chronicle Media)

Syrup samples were distributed near the property’s Sugar Shack. Demonstrations took place on the art and steps of converting sap to syrup.

While maple syrup wasn’t actually made for folks that day, they did get to sip on syrup portions, which represented North American deciduous forest treats.

This made some kids want pancakes, quite frankly, with the event starting at 11 a.m. Pancakes for brunch? But many parents were just happy to simply spend time outdoors with their family on a sunny 44-degree Sunday. 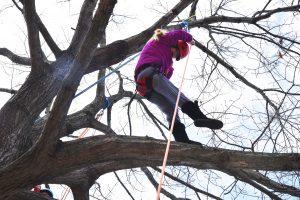 Thalia Koutsougeras, 9, of Glenview, travels up in a tree (to ring the bell). (Photo by Karie Angell Luc/for Chronicle Media)

“I like just being outside today, it’s great, we got the kids outside,” said Nicole Hennessy of Palatine.

Sue and Mike Dineen of Northbrook were here with the grandchildren.

Children could have their face painted and jump around. A puppet show and snake encounter were part of the charm. Tree-tapping walks took place at scheduled times. 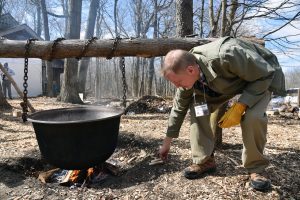 Mottlowitz said education was the reason for the season.

“In a deciduous forest, in a temperate zone, maple sap can be collected to be made into maple syrup,” she said. 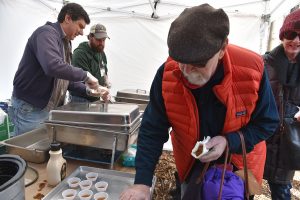 “We need days that are above freezing and nights that are below freezing in order to collect that sap,” Mottlowitz said.

“The sap that we’re collecting is sugar that’s been stored from last fall and winter in the roots and is brought up by the tree’s roots and that’s when we collect it.

“It’s kind of like a fine wine or cheese over winter and it’s got to settle,” she said.

Mottlowitz said the spring event, while large this year with frequent shuttle bus parking, is not as big as the annual fall event. 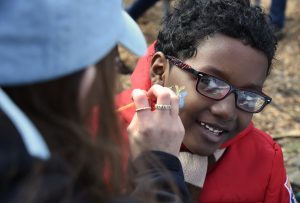 Muaaz Hamad, 7, of Des Plaines and a first-grader at Stevenson School in Des Plaines, has his face painted. (Photo by Karie Angell Luc/for Chronicle Media)

But spring’s eve brought out many folks who walked from remote locations or boarded shuttle buses to partake in a blue-sky event.

Bill and Jin Ko of Vernon Hills brought their children Kevin, 4, and Jun, 9, a third-grader. 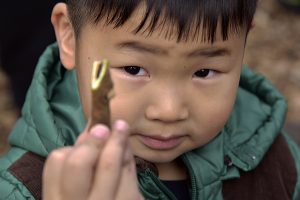 “I want my kids to experience nature,” the children’s mother said.

Food vendors were on site.