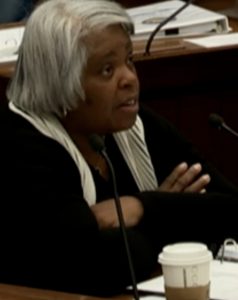 County Commissioner Debra Sims (D-Chicago) says she voted for the prevailing wage and apprenticeship requirements on county tax breaks, although many south suburban leaders she represents were opposed to them, to move the issue forward and get more discussion with those leaders on how best to implement the rules. (Photo from Cook County Board video)

Jim Garrett works to bring development, business and tourism to the South Suburbs.

As president/CEO of the Chicago Southland Convention and Visitors Bureau, he is excited that four hotel developers are looking at building in his region.

However, a new Cook County law to require any developments getting tax incentives to pay prevailing wage during construction and support union apprenticeship programs could put a monkey wrench in those plans.

Garrett said two of the developers have already called him and said that if the tax-break stipulations are put in place, it would be cost-prohibitive for them to build in the Southland region.

“Those words echo in my mind,” the Southland Convention Bureau president said.

Garrett said the tax incentives as they are have been a shot in the arm for the southern suburbs . He and south suburban leaders worry that the new tax-break requirements could drive projects across county and state lines.

South suburban leaders fear that they will lose development to neighboring counties and Indiana because of the prevailing wage and apprenticeship requirements.

“We have a chance to make things happen with these quality projects. We need to build these in the Southland,” Garrett said.

Amish Patel, a developer, said the county requiring prevailing wage and apprenticeship programs as part of property tax incentives for developments will drive up the cost of projects 10-15 percent.

He said he is looking at four potential projects in Cook County but said he would likely have to pull the plug on the developments if the tax-break restrictions are put into effect. He said his financing would dry up.

“Lenders are not going to support a 15 percent increase in costs,” Patel said.

The Illinois Policy Institute claims that prevailing wage rates are inflated nearly 40 percent higher than average wages for private jobs in the same area. The average carpenter in Cook County, institute officials said, makes $31.04 per hour. However, the prevailing wage law mandates a wage of $43.35 per hour for carpenters in Cook County on public construction projects, institute officials said.

Commissioner Jeff Tobolski (D-McCook), one of the sponsors of the measure, amended the start date of the program from July 1 to Sept. 1 to give time for mayors and other south suburban leaders time to make suggestions in how the tax-break requirements should be implemented. 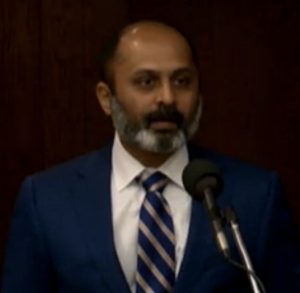 Amish Patel, a developer, tells Cook County Board members that the planned rules for prevailing wage and apprenticeship programs as part of tax breaks for developments will drive up costs for him and others looking to build. “Lenders are not going to support a 15 percent increase in costs,” he said. (Photo from Cook County Board video)

“We have a lot of work to do and the time is now,” Tobolski said of giving suburban leaders a voice in the prevailing wage and apprenticeship requirements. “I don’t want to be meeting three months from now and asking for extensions … We have the opportunity before us now to meet and to see what your concerns are and to address them.”

Tobolski said the apprenticeship program will mean more good-paying jobs for Illinois residents. He said more and more people from outside the state are coming in and earning prevailing wage rates while residents do not.

“We cannot have that,” the McCook commissioner said. “We must make sure, especially when we are providing tax incentives, that the benefit of that, once it goes to the investor, the developer, yes, the person that puts their capital up, that the second part of that goes to the people who live in Illinois. We (need to) provide for them the many and numerous opportunities within the trades, to get them not just a job, but a skill, something that will carry them for the rest of their lives.”

The County Board approved the measure in an 11-4 vote March 14.

Absent from the board vote were Commissioners Jesus “Chuy” Garcia (D-Chicago) and Larry Suffredin (D-Evanston).

Daley, the only Democratic commissioner to vote against the proposal, said he did so out of respect for the south suburban officials who pleaded their case.

“I question whether if this was another district of Cook County we would be voting this way,” Daley said.

Commissioner Debra Sims (D-Chicago), who represents many of the south suburban communities that made their plea before county officials, apologized to those towns’ mayors as the vote was going 12-4 and she herself voted for the measure in the County’s Board Finance Committee. (Garcia was present for the Finance Committee vote on the issue, but not the County Board vote). 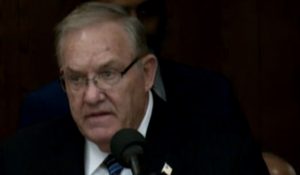 “I know I let you down today, but I am going to do all I can because we have until September to make this work,” Sims told the south suburban mayors. “We’ve all talked about this. This is what we’ve asked for, an opportunity to go back and look at this and to try and fix it.”

She said it was also the first time she felt she let her Fifth District residents down.

“I am not proud of myself in this vote, not happy with it at all,” Sims said. “I just wish we never had to be in this position.”

She said she will work to try to make the new regulations on tax incentives a “win-win” for everybody involved.

“This makes me sick today. This makes me very sick, makes me physically ill because we never had to be in this position,” the commissioner said. “We got elected to take the hard vote and I don’t have a problem taking a hard vote and I fight for this district and everybody knows it sitting on this board. Everybody knows I fight hard for this district but this was a fight I couldn’t overcome.”

She said she was voting for the measure in a spirit of cooperation, trying to move the issue forward for more discussion.

Earlier in the Finance Committee meeting, Schneider proposed deferring the vote to another meeting to provide more time for discussion and examination of the issue, but that effort failed in a 9-7 vote.