The Les Turner ALS Foundation for the ALS Walk for Life at Soldier Field in Chicago on Sept. 16 drew more than 7,000 attendees, raising more than $600,000. A fundraising goal of $1 million is in place as donations continue.

“Today is a beautiful day of hope and inspiration for people with ALS,” said Andrea Pauls Backman of Glenview, executive director of the Les Turner ALS Foundation. 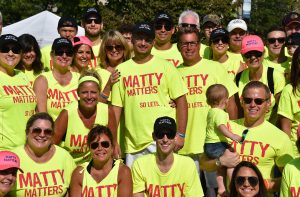 Matty Beuke (center), 27, of River North, was diagnosed with ALS three months ago. His mother Re Beuke (next to him, hand on shoulder) of Hinsdale and friends organized a fundraising team in honor of Matty. (Photo by Karie Angell Luc/for Chronicle Media)

“The ALS Walk for Life truly presents an opportunity for those whose lives have been touched by ALS.”

With blue skies and temperatures in the 80-degree range, people could walk the 2-mile course along Chicago’s lakefront and through Soldier Field.

Amyotrophic lateral sclerosis (ALS) is a rapidly progressive neuromuscular disease that attacks a person’s muscles, impacting their ability to walk, speak, eat and breathe, yet typically keeping their mind intact.

Matty Beuke, 27, of River North, had a fundraising team organized by his mother Re Beuke of Hinsdale and friends.

“I’m here because I have ALS and I just got diagnosed and want to help out everybody here,” he said.

In its 16th year, The ALS Walk for Life has raised more than $12 million for research, patient services and educational activities. Individuals fundraise for the Les Turner ALS Foundation and are provided with tools and team challenges to guide them in their efforts.

While there was no registration fee, the Les Turner ALS Foundation encourages participants to raise a minimum of $100. Held rain or shine, the event opened at 9:30 a.m. with the walk commencing shortly after 11. 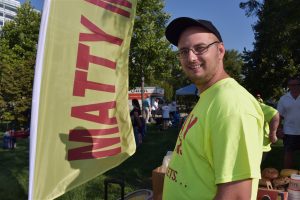 Matty Beuke, 27, of River North, was diagnosed with ALS three months ago. His mother Re Beuke of Hinsdale and friends organized a fundraising team in honor of him. (Photo by Karie Angell Luc/for Chronicle Media)

Opening ceremonies on stage included Irish dancing. On the lawn in front of the stage, the program featured the return of the renowned Lake Central High School cheerleading team from St. John, Ind.

“It’s wonderful to see all of the families,” said Wendy Abrams of Highland Park, retired executive director of the Les Turner ALS Foundation.

“Actually, this is our first year and we plan to be here every year, moving forth,” said Yolanda Hill of Park Forest, who wrote an inscription on a marker board in memory of Erica Harris of Chicago, who died last October from ALS. 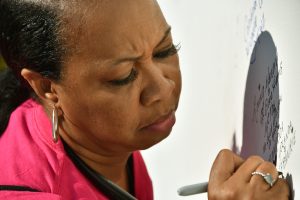 In memory of Erica Harris of Chicago, who died last October from ALS, is Yolanda Hill of Park Forest, writing an inscription. (Photo by Karie Angell Luc/for Chronicle Media)

Hill was accompanied by Frankie Harris of Chicago who said the event, to her, was also about, “educating and knowing what’s going on (with the disease).”

Founded in 1977, the Les Turner ALS Foundation of Skokie assists in research, patient care and education about ALS, also serving nearly 90 percent of people with ALS in the area. 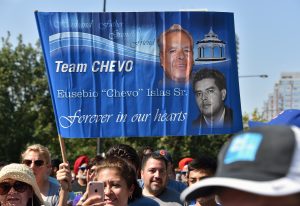 “I’m here to help defeat ALS,” Van Horne said. “We’re going to walk and raise some funds to defeat this nasty disease and have some fun in the meantime.

“It’s a wonderful day and we’re happy that we could get all of these people together for such a great cause, hoping one day soon to have one of these where we’re celebrating the end of it (ALS),” Van Horne said.