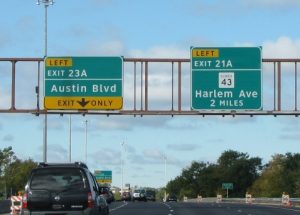 Illinois State Police are investigating two shootings that occurred this weekend (May 16-17) on area expressways.

A Chicago man was shot Sunday morning on the southbound Dan Ryan expressway at Roosevelt Road.

Police responded to a local hospital after being notified a walk-in gunshot victim was being treated. The victim advised that he had been shot at 2:15 a.m. Sunday on Interstate 94.

The 24-year-old man, who was a passenger in a vehicle, sustained non-life-threatening injuries. The driver and two other passengers were not injured.

The southbound lanes of the Dan Ryan expressway were closed for more than 90 minutes during the shooting investigation.

In the other weekend expressway shooting, a Broadview man was injured Saturday afternoon (May 16) on the Eisenhower expressway.

State Police said they were notified that a local hospital was treating a walk-in gunshot victim, who advised that he had been shot on Interstate 290.

The 32-year-old Broadview man, who was the driver of the vehicle, sustained non-life-threatening injuries, police said. A passenger in the car, a 28-year-old Chicago woman, was not injured in the incident.

The eastbound lanes of Interstate 290 west of Harlem Avenue were shut down for nearly two hours for a police investigation following the shooting. All eastbound traffic was diverted off the interstate to the Des Plaines Avenue ramp during the investigation.

Anyone who witnessed either shootings or has any knowledge of the incidents is asked to contact the State Police at 847-294-4400. Callers can remain anonymous.