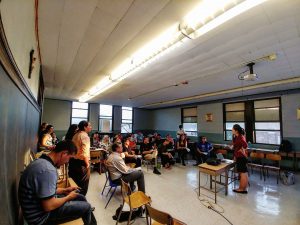 In south Cicero, Forest View and the town sometimes cruelly called “the Village of STINK-ney,” locals dread summer’s warm weather and the wafting smell of sulfates decaying in wastewater.

The odor is the rotten-egg smell of Hydrogen Sulfide (H2S) released in water treatment at the Stickney Water Reclamation Plant, at 6100 Pershing Road.

Area residents gathered June 27 at Queen of Heaven School in Cicero to hear about what steps could be taken by the Metropolitan Water Reclamation District to clean up the H2S odors released in the treatment of sewage. Through the open school windows, the faint sulfuric odor was ever-present.

“I never wanted to visit my sister’s house, when she lived here, because of the stink,” said David Leija. “Now I’m living my dream because my family’s all together, but the smell is just so bad. I hate it so much.”

Hydrogen Sulfide is colorless, strong-smelling and dangerous in high concentrations. The gas is the leading cause of death of sanitary waste treatment workers because the vapor can deaden the sense of smell in the human nose.

In lesser concentrations in the air, exposure to H2S has been linked to headaches, eye irritation, fatigue, and sore throats.

“My eyes burn once in a while,” Leija said. “I want to breath through my mouth and I’m disgusted. It’s literally human waste that I’m breathing in. It’s a vulgar smell.” 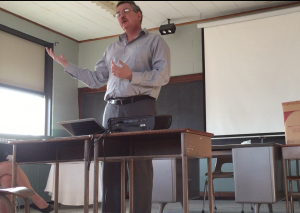 Members of Ixchel, a Cicero environmental justice and education activist group organized the event, which included a report from a toxicologist and two representatives from the U.S. Environmental Protection Agency, Region 5.

“Believe it or not, MWRD won’t consider [the smell] a problem because people don’t complain enough,” said Ixchel founder Delia Barajas, of Cicero. Barajas passed out bi-lingual information cards in English and Spanish with information about how to report waterway blockages, illegal dumping and odors to MWRD.

“People think the only way to get attention to the odors is if they get sick with asthma, or something serious, but that’s not the only way to demonstrate that the odors are affecting your health,” said attorney Keith Harley of the Environmental law program at Kent School of Law’s Chicago Legal Clinic. “If you change your behaviors on days when the odors are intense, or don’t let your children be outside, or if you have a direct reaction to the odors, if they affect your home, the places you go, it’s extremely important.”

MWRD must renew its Title V Clean Air permit with the EPA every five years. Ixchel members and other environmental groups asked MWRD for help mitigating the odors.

“Although the Clean Air Act does not require odor-related conditions in the MWRD’s Title V Clean Air Act permit, the [MWRD] has nevertheless agreed to collaborate with Ixchel on the renewal of its permit for Stickney in the spirit of being a good neighbor,” said MWRD spokesperson Allison Fore. “Specifically, attorneys for the District and Ixchel have worked together to develop odor-related conditions for the permit and have proposed those conditions to IEPA for inclusion in the final permit.” 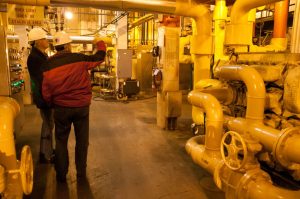 MWRD has agreed to issue an “annual odor mitigation” report, which would outline steps MWRD is taking to dampen, cancel out or remove the smell, Fore said. MWRD has committed to patrol odors and to provide extra training for MWRD employees, she said. MWRD has also agreed to replace 100-year-old cone-bottomed Imhoff sewage tanks with a new technology called conventional primary settling tanks. The tanks will cost $250 million and come online in 2018, Fore said. In 2016, MWRD also installed plastic curtains on “odorous air buildings to reduce exhaust conditions,” Fore said.

“Indeed, the District has already invested in many odor control systems throughout the Stickney plant and we are committed to continuing our work with the community in good faith and to being a good neighbor,” Fore said.

Harley also mentioned that members of the MWRD board are elected, so it’s “important to let them know the priority of funding projects,” he said.

U.S. EPA agents Andrea Morgan and Stephanie Diaz spelled out how the public can be involved in the EPA permitting process. Typically, permits have a set window of time between 30-60 days to submit comments, said Diaz.

It’s unclear when the permit will be open for comments, but Ixchel members and supporters were reminded to collect anecdotes of how the strong rotten-egg smell made their lives harder.

“Last year I went on a personal driving trip through 16 Latin American countries, in the poorest parts of Brazil where [residents] are marginalized 100 percent,” Leija said. “But nowhere in the whole hemisphere that I stayed smelled as bad as right here. I just never thought we could do anything about it.”