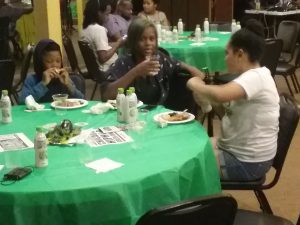 Despite being a vegan for life, Justice Beke was still impressed when biting into a plant-based burger.

“This is amazing,” the 14-year-old Berwyn resident said at Chicago’s first Hip Hop Green Dinner, held Aug. 20 at the Sankofa Cultural Arts Center on the city’s West Side.

The event was seen as a way to introduce people, especially youth, to plant-based food.

Along with a burger, attendees were served a meal, which included plant-based macaroni and cheese, kale, and ice cream — all to show them that taste does not have to be sacrificed when eating healthy. The food, catered by Oak Park-based Chicago Style Vegan, got rave reviews from vegans and nonvegans alike at the event.

It was not unlike Keith Tucker’s first vegan experience.

“It blew my mind,” Tucker said of first tasting vegan food in 2008 at Seattle’s Veg Fest. “I realized how much I didn’t know about food.”

Tucker transformed his life and wound up losing 60 pounds simply by going vegan. He hopes by bringing his Hip Hop Green movement to places like Chicago kids will also see the value in better eating.

Even though there were many empty seats at the Hip Hop Green Dinner, Tucker was not discouraged by his first foray in uniting hip hop and healthy eating in a city more known for its beef sandwiches than its broccoli spears.

“I think it is a good start,” Tucker said. “People, especially kids, had the chance to experience plant-based food.” 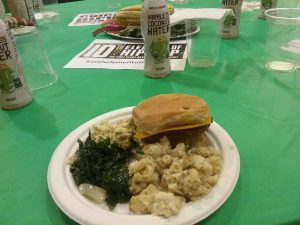 One of the plant-based meals served at the Hip Hop Green Dinner. (Photo by Kevin Beese/for Chronicle Media)

He said plant-based food is already being touted as “the next big thing,” bringing comparisons to Google. Tucker said that Chicago will not be left out of that upward trend.

Zarakyah Ahmadiel, who teaches on the impact that food has on violent behavior, said that he and others promoting healthy eating in Chicago definitely have their work cut out for them.

“It will take us awhile to get people to think differently about food,” he said.

While vegan food has come a long way in taste, Ahmadiel said that artificial sweeteners and other chemical ingredients are hard to top from a taste standpoint.

Hearing of children having Flaming Hots for breakfast, Ahmadiel has worked to get healthier items in Chicago public schools. Twice per week, he provides healthy snacks, such as freezer pops made with blueberries, to some CPS students.

As youths Lauren Flint, Lynn Reed and David Ikeemaka sat at a table at the Hip Hop Dinner, enjoying plant-based ice cream, Reed said being a vegan is not cause for isolation from peers as it may have been in the past.

“A lot of my friends are vegans,” Reed said.

That shows how far healthy eating has come, according to Marla Rose, mother of Justice Beke and author of The Vegan Street Blog.

“Twenty years ago, things were much different,” said Rose, who has been a vegan with her husband, John Beke, for 21½ years. “We would celebrate when we found soy milk in a cafe.”

Hip hop music is seen as a way to draw urban youth into the topic, for them to get more information about healthy eating.

Enoch Muhammad, founder of the Chicago-based Hip Hop DetoxX, said hip-hop music is perceived by many as being about nothing more than doing drugs and degrading women. He defined hip hop as “truth without borders” and said his program, which uses the music to facilitate critical thinking and healthy lifestyle skills, removes the poison from the lyrics.

He said people wrongly view children as the future. They need to view youth as our present, adding that they need our attention now.

“If we don’t invest in them now, we can’t expect them to be something else 10 years down the road,” Muhammad said.