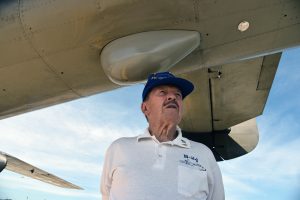 Howard Levinson of Glenview talks about his World War II service flying different bombers under the wing of a B-25 Mitchell “Tondelayo” bomber.

If you heard rumbling over Chicagoland skies during the first week of August, that could have been the sound of World War II bombers flying to and from Chicago Executive Airport in Wheeling.

“It’s a flying museum, we bring the planes to you,” said Steve Weigandt, crew chief from Byron, Ga.

As part of a 110-city U.S. tour, The Collings Foundation’s Wings of Freedom Tour brought aircraft to Wheeling from Aug. 1-5. Matthew Isely of Batavia is inside the Boeing B17G Flying Fortress, a World War II plane.

For an entry fee, people could inspect the aircraft, also walking inside designated planes. Fans could fly in specific aircraft for costs ranging from $400 to $3,200.

Organizers say experiencing the vintage fleet could be a once-in-a-lifetime event or memory trigger. 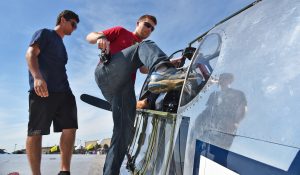 State Rep. Elaine Nekritz of Northbrook is about to climb the ladder to enter the Boeing B17G Flying Fortress, a World War II plane.

“We’ve had veterans break down,” Weigandt said. “We’ve had veterans who’ve had Alzeimer’s (disease) and all of the sudden they start talking. One vet started talking like he was talking to his crew in World War II. It’s kind of like therapy to a lot of them old vets.” 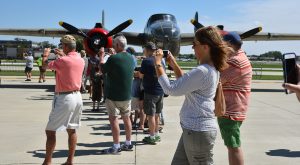 Fans of the P-51 Mustang “Betty Jane” fighter (unseen on left) document on cell phones. The B-25 Mitchell “Tondelayo” bomber is in the background.

There’s a story of one veteran, a pilot, who took a tour flight and died the next day as if he were making his last flight.

The B-17 is one of eight planes in flying condition in the United States, tour organizers said.

The B-24J and Full Dual Control P-51C Mustang are the sole examples of their type flying in the world, they claim. The B-25 is known for being used in the Doolittle raid over Tokyo and other islands in 1942. 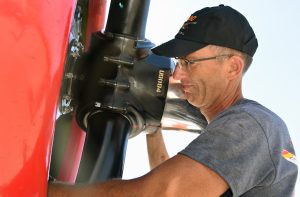 Will Dismukes of Dallas, Texas, is a captain of the B-25 Mitchell “Tondelayo” bomber. “It’s a huge privilege,” he said, of piloting this aircraft. “This is a huge honor.” He’s seen polishing a wing portion.

“The B-24 was dear to my heart because it got me over there and back,” said Howard Levinson of Glenview, a B-24 airplane commander during his South Pacific service in the Army Air Force from 1942 to 1946. He also served reserve duty from 1946-51.

Levinson hopes youth will learn from seeing the fleet.

“Patriotism and respect, those are the two most important things,” Levinson said. “Everyone should serve one year,” he added, suggesting mandatory U.S. military service.

“I think one year would give them (young adults) a taste of what it’s like,” he said.

The Collings Foundation is a 501c3 non-profit foundation based in Stow, Massachusetts. Visit That’s not a skirt but a cover over a set of stairs. But you can see the shoes of June Losavio of Hoffman Estates under a B-25 Mitchell “Tondelayo” bomber. The B-25 Mitchell “Tondelayo” bomber.

(All photos by By Karie Angell luc For Chronicle Media )