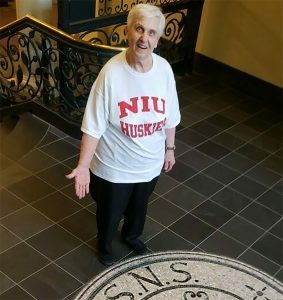 “I’ve got wonderful help and encouragement from so many,” says Joyce DeFauw of her pursuit of a degree nearly seven decades after she first enrolled at NIU. “I live in a kind of place where word travels fast. Many are rooting for me and supporting me and saying I can do it. I can’t let them down.” (NIU photo)

Her days still begin with devotions, a bit of exercise. She eats breakfast with her friends in her Geneseo retirement community, plans the day’s activities. Perhaps it’s Bingo, a trip into town.

But, since August, she’s added a new activity to her daily routine—logging onto her computer.

“I’ve got wonderful help and encouragement from so many,” says Joyce DeFauw of her pursuit of a degree nearly seven decades after she first enrolled at NIU. “I live in a kind of place where word travels fast. Many are rooting for me and supporting me and saying I can do it. I can’t let them down.”

DeFauw fell a few semesters short of graduating from NIU the first time around in the early 1950s. So she’s re-enrolled in hopes of finally earning a degree, this time through online courses.

The oldest current student at NIU, she’s a bit frightened by the whole experience, but she has a sort of sage-like calmness about it, as if it’s just another challenge in a lifetime of adventures.

That’s all, she says. Not much else to it.

She’s not looking for any attention, doesn’t expect any fanfare. She’s just planning to plug away at a steady pace.

Yet, her story has resonated.

It’s a story of family, faith, perseverance, the value of education, of endless learning.

“Others can do it,” Joyce DeFauw says of her return to NIU to finally earn a degree. “If God gives me the ability, I will, too.”

“I’ve been inspired by so many of my students, but this was really just kind of special,” says Judy Santacaterina, director of the Bachelor of General Studies program at NIU.

“She came in and I thought, ‘God bless,’” Santacaterina says. “I think it just rejuvenated my sense of purpose. I just give her all the credit in the world.”

“That day kind of encapsulated what NIU is about,” Santacaterina says. “It’s somebody who is 19 and somebody who is 89 pursuing their dreams. If we can kind of facilitate that in some way, we’re doing what we should be doing.”

Joyce Viola Kane back then, DeFauw enrolled to obtain a teaching degree.

“At the end of my freshman year, I thought I can’t teach because I don’t know enough so I changed to home ec[onomics],” remembers Defauw, who grew up on a farm with parents who encouraged her to get an education. Her mother was a schoolteacher.

“Then this man came along that stole my heart. I quit and got married and had nine children, and that was the end of that. That’s where it stopped.”

She’d taken three-and-a-half years’ worth of classes when she met first husband, Don Freeman Sr., at church. The couple had three children in three years of marriage before Freeman died.

Widowed about five years, DeFauw married her second husband, Roy DeFauw, and had six more children, including two sets of twins. She now has 17 grandchildren and 19 great-grandchildren.

It was one of DeFauw’s children, Don Freeman, who first suggested awhile back that she finish her degree. He’d heard his mother talk through the years about her regret.

She’d remembered the letter her father wrote when she quit NIU, his disappointment. “Are you sure this is what you really want?” he’d asked back then.

“For a long time, I had guilt dreams because I didn’t finish,” she remembers. “I got past that and was at peace with that.”

“I thought about it for a little while,” DeFauw says. “Then I thought, ‘Why not?’ I have all the time in the world and the ability.”

Her family members, including granddaughter Jenna Dooley, news director at Northern Public Radio, have rallied around her. They bought her a computer. She’s not really sure what kind.

“Let me tell you,” DeFauw says, “I had never owned a computer until May of this year.”

Her son now comes weekly to help her understand it.

“I took typing in school, so I knew there was a home row,” she says.

That’s about all she knew. Everything else, she’s learning.

“It’s beyond my imagination what’s out there. I feel like I’m making a wedding dress and I don’t know how to thread a needle,” she says with a laugh. “I’ve learned a lot, but I feel stupid.”

In the next breath, though, she says she’s not giving up.

When she gets frustrated, she clicks on Solitaire for a spell.

“I’ve got wonderful help and encouragement from so many,” she says. “I live in a kind of place where word travels fast. Many are rooting for me and supporting me and saying I can do it. I can’t let them down.”

Needing to take 400-level courses to finish her degree, DeFauw’s first online course involves Computers in Classroom Teaching. So, she’s not only learning to use the computer for the first time, she’s learning all about them.

“It’s a whole new language for her,” says her son, Don Freeman. “Just like so many people, she’s afraid if she hits a wrong button it’s going to be lost forever. It’s taken her very much out of her comfort zone. Every class is supposed to do that, I presume.”

Freeman did a lot of the legwork to get his mother enrolled, contacting Santacaterina’s office.

Santacaterina thought a mistake had been made on the date of DeFauw’s transcript request when she first got the message.

Finding the paperwork and translating DeFauw’s courses into today’s credits required the efforts of Registration and Records, as well as deans at various colleges. While a few courses, such as Penmanship, didn’t really translate, most did. It took some time, but they worked it all out.

Through it all, Santacaterina has kept in touch with DeFauw, asking to meet her in person.

“I think Joyce’s story speaks to so many of us,” Santacaterina says.

“I always try to tell them I’m amazed at how you’re able to balance this,” Santacaterina says. “Sometimes they get frustrated because it’s taking so long. I keep saying, ‘There’s light at the end of the tunnel.’

“Joyce has kind of become this poster child. She has this spirit of, ‘OK, well, let’s give it a try.’ ”

Santacaterina now checks in with DeFauw via email, and recently asked her how her class was going.

“I have to keep this short because I have to go do my homework,” DeFauw replied.