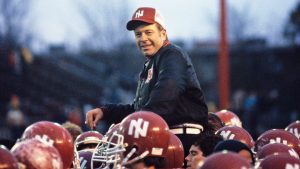 Bill Mallory, a Hall of Fame coach who led Northern Illinois University to its first Mid-American Conference Championship during his 27 years as a collegiate head coach for four different Division I institutions, died  Friday at the age of 82 in Bloomington, Indiana.

Mallory died following a brain injury suffered in a fall and emergency surgery last week, according to reports.

Mallory spent four seasons leading the Huskies from 1980-83, compiling a 25-19 record in DeKalb. Prior to his arrival, NIU had experienced just two winning seasons as a “major college” program.

He led the 1980 Huskies to seven wins, including five road contests, in his first season, as the Huskies tied for third place in the MAC, and his 1982 team won its final three games to finish 5-5.

Mallory’s everlasting legacy at NIU was built on the groundbreaking success of the 1983 Huskies. That 1983 team went from a season-opening win at Kansas, NIU’s first over a Big Eight (now Big 12) program, to an 8-1 record in the MAC to claim the Huskies’ first conference title in its history as a “Major College” (now Football Bowl Subdivision) program.

The magical 10-2 season concluded with NIU’s first FBS bowl appearance – in the California Bowl – and first bowl win, a 20-13 victory over Cal State Fullerton, as a major college program. Twenty seasons would pass before NIU earned its next bowl trip.

During Mallory’s four years on campus, the Huskies won 57 percent of their games and had seven players drafted to the National Football League.

Following the 1983 season, Mallory left NIU for Indiana, where he served as head coach from 1984-96, reviving the Hoosier’s program and leading them to six bowl games.

He was inducted into the MAC Hall of Fame in 2013 and is the only head coach to lead two different teams to MAC Championships with the 1983 championship by NIU and the 1973 title won by his Miami team.

Mallory’s connection to NIU has remained strong over the years. Joe Novak, the winningest coach in NIU’s FBS history, spent 15 years as defensive coordinator for Mallory at NIU (1980-83) and at Indiana (1984-95) before taking over the Huskie program from 1996-2007.

One of Bill Mallory’s three football coaching sons, Mike, was on Novak’s staff as an assistant from 1996-99.  Mallory returned to DeKalb in May of 2014 to give the eulogy for Bob Brigham Sr., the NIU athletic director who brought Mallory to DeKalb.

Current NIU head coach Rod Carey played center for Indiana under Mallory from 1989-93 and counts him among his greatest coaching influences. During Carey’s tenure as head coach, Mallory has been spotted at NIU spring and preseason practices, at games, and at events like the Annual Brigham-Novak Golf Tournament. Before the Huskies took on Ball State in 2014, Carey had Mallory give the pregame speech.

Mallory (1953-56) won three varsity letters as a player at Miami University and earned first-team All-MAC honors and served as team co-captain in 1956. Following graduation in 1957, Mallory served as an assistant coach on the staffs of College Football Hall of Famers Woody Hayes, Doyt Perry and Carm Cozza.

Mallory was named Miami’s head football coach in 1969 and posted a 39-12 overall record in five seasons (1969-73), including a MAC title in 1973 (11-0 record), a win over Florida in the Tangerine Bowl (final ranking of No. 17) and the seventh best winning percentage (.765) in Miami football history – a better winning percentage than Woody Hayes, Bo Schembechler and Terry Hoeppner.