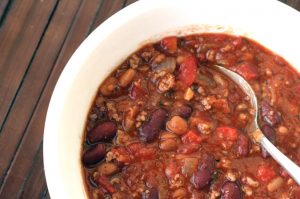 Enjoying a bowl of chili is a tasty way to support the Genoa-Kingston Fire Department. The department will hold its annual chili supper 4-7 p.m. Feb. 23, at the Genoa Vets Home, 311 S. Washington St., Genoa. The menu will include all-you-can-eat chili, salad and desserts.

Shoe store to close in bankruptcy

DeKalb is losing another national retailer. Discount retailer Payless ShoeSource, Inc. is filing for bankruptcy, and plans to close all of its approximately 2,300 stores in the United States. There is currently a Payless Shoes location at 2350 Sycamore Road in DeKalb.

Barring Payless finding a buyer at the last minute, the chain retailer is planning to have going-out-of-business sales at all of their stores.

Payless would join Claire’s as another national retail chain to close in DeKalb recently. Sears declared bankruptcy in 2018, but Sears Hometown Store in DeKalb was not affected by the bankruptcy, as Sears Hometown and Outlet Stores Inc. was spun off from Sears Holdings in 2012.

The DeKalb Park District and NIU Outdoor Adventure Center are offering free ice skating time from 3-6 p.m. Feb. 21. The $5 skate rental fee will be waived. Hockey and figure skates will be available in adult and children’s sizes. No registration is required.

Skating will take place at NIU Outdoor Adventure Center, 325 N. Annie Glidden Road; the East Lagoon on the NIU campus; and the Ice Rink in Hopkins Park, 1403 Sycamore Road, DeKalb. For more information and to check on weather conditions, call 815-758-8853. A skate night was cancelled earlier this month because of poor weather conditions.

Documentary looks at effect power plant had on a town

The Green Lens Film Series, which shows documentaries about the environment, continues Feb. 21 at the Egyptian Theatre, 135 N. Second St., DeKalb, with a showing of “Cheshire, Ohio.” Filmed over a decade, the documentary follows a community devastated by coal, starting with American Electric Power’s buyout and bulldozing of this Ohio River community after exposing them to harmful emissions.

The 2017 documentary features a gun-toting 83-year-old woman who refused to sell her house to the power plant next door. The plant moved ahead with its $20 million deal to buy out most of Cheshire and bulldoze all the homes. What happened in this Ohio River town overrun by one of the largest coal-fired power plants in the world is a story of money, power, corporate dominance of American life and the increasingly difficult choices made about the environment. Filmmakers returned several years later to the now almost emptied town and followed the case of 77 plaintiffs who filed a lawsuit against American Electric Power for cancer and other diseases they developed from working unprotected at the plant’s coal ash landfill site.

The film will be shown at 7 p.m. Admission is free.

The DeKalb Public Library, 309 Oak St., will host a unique immersive experience Feb. 26 based on the story of Frankenstein as the theatre company, Pure Expression, makes its American debut on its way to Chicago, New York and Washington, D. C. The audience will experience this iconic novel through the voices of Mary Shelley’s haunting characters in the library’s hidden corners, following the ghost of Victor Frankenstein to the dramatic climax of the tale.

Shows start every 10 minutes from 12-8 p.m. Guests will be placed in pairs for the show, so groups should allow extra time for all members to complete the experience. Children ages 8-17 must be accompanied by an adult. No registration is required. Admission is free. For more information, send an email to emilyf@dkpl.org or call 815-756-9568, ext. 1000.

Tell a dog a good story at library

Gracie Allen loves to hear stories, and children are invited to read to her.  Gracie Allen, a certified therapy dog and a papillon/chihuahua mix, will visit the DeKalb Public Library, 309 Oak St., to listen to children read at 10 a.m. Feb. 23 and 5 p.m. Feb. 26. Children may register at the Youth Services Desk for a 10-minute time slot to read to Gracie. For more information or to sign up, call 815-756-9568, ext. 3350 or ask at the Youth Services Desk.

Applications are now available at the High School Counselors Office. Completed applications are to be submitted to the Guidance Office by April 5. The Scholarship recipient will be announced and awarded the scholarship at the 2019 Senior Night.

The Genoa-Kingston Fire Department will hold its annual chili supper 4-7 p.m. Feb. 23, at the Genoa Vets Home, 311 S. Washington St., Genoa. The menu will include all-you-can-eat chili, salad and desserts. Tickets can be purchased from any fire department member or at the door. The cost is $7 for adults and $5 for children and senior citizens, 65 and older. Admission is free for children 3 and under. Hot dogs will be served for children who do not like chili. Water, milk and coffee are included in the ticket price. The chili will be prepared mild, so for a kick, diners may bring their own hot sauce. Proceeds will support the fire department.