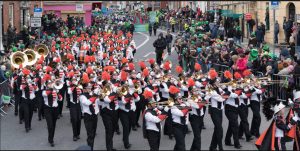 The DeKalb High School Marching Band fills the street at a parade. The band will fill another street — Chicago’s State Street — when it performs in this year’s McDonald’s Thanksgiving Day Parade in the city.

More ramp repairs on I-88

Repair work is scheduled for three ramps of the Illinois Tollway, right after the ramp connecting Annie Glidden Road to westbound Interstate 88 reopens.

Detour routes will direct traffic to the Peace Road interchange to access I-88. All work at the interchange is scheduled to be completed by the end of summer.

In addition to the ramp reconstruction, traffic on I-88 in this area will be reduced from two lanes to one i n both directions for roadway resurfacing.

The tollway has also scheduled work to resurface and rebuild ramps and bridges at five other interchanges on I-88 between Illinois Route 251 and Orchard Road. This work is part of Move Illinois, a 15-year, $14 billion capital program to improve mobility, reduce pollution and create as many as 120,000 jobs throughout the region.

Drivers get tickets for texting while driving

Distracted Driving Awareness Month, a nationwide initiative to eliminate preventable accidents and fatalities caused by distracted motorists, was recognized by the Sheriff’s office from April 16-30.

The man whose determination on the football field has inspired many off the field will be the guest speaker May 17 at the Kishwaukee Family YMCA’s annual fundraising dinner.

Against all odds on a gridiron in South Bend, Indiana, Daniel “Rudy” Ruettiger, in 27 seconds, carved his name into history books as perhaps the most famous graduate of the University of Notre Dame. The son of an oil refinery worker and the third of 14 children, Rudy rose from valleys of discouragement and despair to the pinnacles of success. Today, he is one of the most popular motivational speakers in the United States. It took years of determination to overcome obstacles and criticisms, yet Rudy achieved his first dream – to attend Notre Dame and play football for the Fighting Irish.

The 2018 Y Community Awards Dinner will be held at 5 p.m. at Faranada’s, 302 Grove St., DeKalb. Tickets are $100 per person, and may be purchased at kishymca.wixsite.com.

For more information, contact Debbie Madeley at dmadeley@kishymca.org or 815-756-9577.

Members of the DeKalb High School Marching Band will start their Thanksgiving celebration by performing in the McDonald’s Thanksgiving Day Parade in downtown Chicago. The parade will kick off at 8 a.m. and travel on State Street.

Under the direction of Steven Lundin, the DHS marching band will travel to Chicago, where it will rehearse with the mass band and learn from nationally acclaimed adjudicators. In their free time, band members will take in the sights of the Windy City.

Artistic graduates of Kishwaukee College are being recruited to submit art work for an alumni art show to be held as part of the college’s celebration of its 50th anniversary. The Alumni Art Show will run July 19 to Aug. 30 in the Kishwaukee College Art Gallery.

The gallery and 50th Anniversary Committee would like to include as many alumni artists as possible in this group show. Artists may submit up to 10 pieces. The deadline for submissions is June 28.

The show will open the evening of the 50th Anniversary Fragments of Kish Wine Walk at the college, 4:30 to 7 p.m. July 19. Viewing the exhibition will be included in the Wine Walk itinerary. Tickets for the Wine Walk will go on sale June 1.

The gallery and 50th Anniversary Committee are hoping to showcase alumni who are both emerging and established artists in a variety of media and focus on bringing diverse, local and reminiscent experiences to the campus in celebration of 50 years of Pride, Passion and Purpose at Kishwaukee College.

For information about how to submit artwork, go to kish.edu/alumniartshow or contact Jaime Long, dean of Arts/Communications/Social Sciences, at jlong@kish.edu.